I was feeling on top of the world after two wonderful days of pub ticking.  Isle of Man was perhaps the best place ever visited since BRAPA started in April 2014, and I walked to Douglas Bus Station with my head held high, ready for a trip to the South West tip for the pubs down there.

But it's when I start getting complacent that BRAPA (and life in general) bites me in the arse.  It's been a pattern I've noticed for years now.  On the plus side, feedback on my Blog suggests my readers enjoy it most when things go horribly wrong for me, so thanks for that everyone(!)  In 2016, my 'most read blog of the year' was the one where I couldn't get into a pub.  So enjoy this you sadists.

And it was generally all of my own making.

It all started back at the hotel actually with the news that the Manx Cat sanctuary (like so many things) doesn't open in February, so no visit to see tailless fur-babies for me, sad times.

After a painstaking bus journey, down at Port Erin after 11am I was aiming to start the day by ticking off the Falcon's Nest, I was greeted by this very shut looking pub, more on that later..... 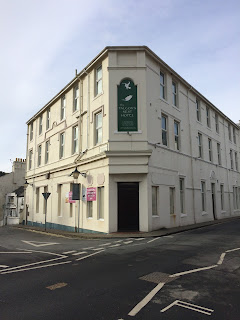 According to the 'Good Beer Guide' app, Port St Mary's Railway Station Hotel was hidden away in the middle of nowhere miles from the place itself.  It should maybe have occurred to me that it might be badly plotted on the App - after all, I'd noted the Baltic in Foxdale was.  And one Ramsey pub was in the sea!

But like an idiot, I walked.  And walked.  Ruining my shoes on dirt tracks full of muddy water, barely impassable to pedestrians.  But I kept walking.  Through a weird little place called Cregneash where little old women and community service slack jaws seemed to be 'building' an actual village out of sticks, 'twas bizarre.

I finally realised (when the track gave up all together) there was no secret railway line, no cut through, no bus routes.  I'd been had!  I trudged back ruining my shoes further.  At least the weather was mild and the scenery stunning, plus I needed a walk to burn off Mon & Tues beer belly.

Back at Port Erin, Falcon's Nest still looked very closed so I took the bus to Port St Mary.  Now, where to press that bell?  Someone else will.  They didn't.  Next thing I know, I'm racing back down the A31 past Cregneash to 'Calf Sound', where you can see the Calf of Man, a little rock off the coast.  Hourly buses to get back the helpful driver tells me.  FFS!

So I pretended to be a tourist, read the history, ate some Mini Cheddars on a bench.

Then a storm blew in so I took refuge in the cafe with a cup of tea, served by a jolly brunette but I was in no mood for pleasantries, especially when an out of control twild came along and opened a fire exit, letting a strong gust of icy wind into the cafe.  Staff fuming, but Mum gave zero shits.

Where had I gone so terribly wrong?  Well, a bit of research told me Railway Station Hotel was just north of Port St Mary, but not open til 5pm Mon-Thu so I'd dodged a bullet there anyway.

Furthermore, Google Maps seemed to suggest the Falcon's Nest Hotel had 'accommodation'  and 'hotel' in two separate areas on the same road.  An intriguing thought.  One last trip back to Port Erin to check, third time lucky?  THREE AND A HALF HOURS had passed since I was due to get in my first pub.  Epic BRAPA fail, as the kids said in 2017.

But where Google Maps claimed the non accommodation bit was, further down the road by the Methodist Church, actually didn't exist at all.  I disconsolately walked back to the bus stop, finally beaten, where a smoking bus driver asked if I was getting on.  "I'm just off for a piss, I'll be 5 minutes".  A long piss I thought, but time for me to walk back to the original Falcon's Nest to check one final time.

On the other side of the road this time, I noticed how big the hotel actually was, stretching right to the seafront.  And a door was open, IT HAD BEEN OPEN ALL THIS TIME!  What an idiot I felt.