Despite the ridiculous number of pillows and cushions these places give you, my first nights sleep at the Ellan Vannin went well, and after massaging the crick out of my neck with the GBG (it really is a multi purpose device you know), I was back at the hot spot of Douglas bus station, Stop B this time, and in Peel for 10:15am.

Peel was a pretty if peculiar looking little place, especially the town itself.  It reminded me of a French fishing village I watched on a drama series at school, and was surprised when the 'hero', a postman in short shorts and a strange moustache (I promise you, this was suitable for school kids) didn't appear and try and sell me some bread.

I needed to blow the cobwebs away from my Monday evening pub session, so I joined the three hardy souls on the unspoilt beach, with Peel Castle shivering in the background. 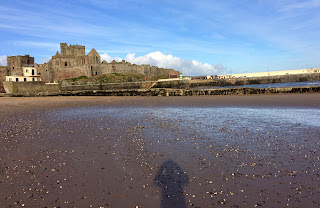 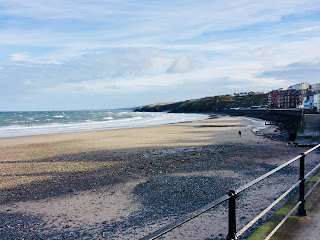 It wasn't so much a case of blowing the cobwebs away as 'knocking ten shades of shit out of the cobwebs' as the wind was biting and fierce.  Before long, my fingers were numb and the few people I walked past had hoods up and made the same noise, "aghaghagh".  And then my phone died for no reason, so I had to try and shelter around the corner so it came back on for the following photo. 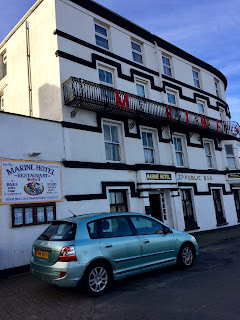 The GBG said 10am opener, a door was open, but I wasn't taking anything for granted as I was plunged into darkness, where the silhouette of a woman with a mop and bucket was (probably) looking at me in a curious manner.  "Are you open?" I asked with no hope whatsoever.  "Nahhh, 12 noon.  Were you after food?"  "HAHAHA no, just a drink!" I replied a bit too enthusiastically.  Well, that seemed to unlock a secret code.  "Fine, come through this way" she replied, and before I knew it, I was in a room with ales, pool table and to my surprise, an adjoining bar full of lager drinkers.  The beer I wanted (Bushys something) had "just gone" (hmmm), but it's okay, I had a sudden craving for the island's favourite non-Manx beer, Robinsons Trooper.  Or 'Tooper' as it said on the sign.  There was also the largest beermat I've ever seen covering the pool table.  Chairs will still on tables, suggesting a hoovering session was forthcoming, so after rearranging some furniture, I finally 'settled' down.   From the other bar, and bloke randomly shouted musicians names at 3 minutely intervals.  "The Who".  "Debbie Harry".  "Roy Orbison".  "Public Image Ltd".   He then had a long meandering phone call with his elderly mother.  No, she hadn't received his postcard from Costa Rica.  He'd bought her a present back, she didn't seem too excited.  "It's just a bit of something local", he persisted cryptically, trying to build non-existent suspense.  Either that or it was something highly illegal.  On the plus side, he managed to talk her out of wallpapering her front room.  "You are too old for that!" he scolded, though not too old to answer the door when Diego and the Cartel track her down.  We'd not had a 'snow' mention yet, so it was a relief when a man I'd identified as Mr Dangerman on account of his neck tattoos, triggered by a weather report on the radio, ran to the window, pointed at the sky and shouted "you said we'd have more than this!"  It was that kind of pub. 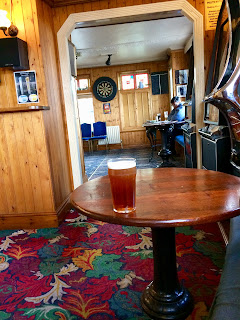 The wind had stopped being frightening, the sun was bright in the sky, and all was well with the world as I walked around the harbour perimeter to pub two thinking that after that last pub experience, the phrase I'd already heard three times "85,000 alcoholics clinging to a rock" had never been more apt.  Make that 85,001 as the clock ticked around to 11:02am and I realised I was behind schedule! 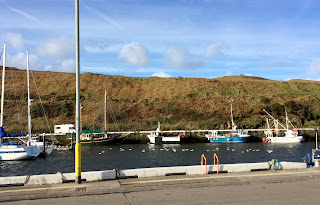 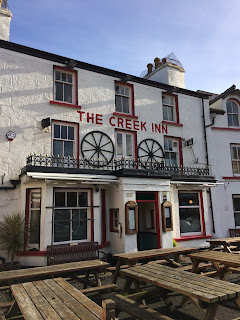 I let the landlady back into the pub before me, she'd been tipping something down a drain outside.  Inside, I was presented with the biggest beer selection to date, but after the chilly morning, a stout from the Hooded Ram, soon to be Hooded Sham, brewery, was just what I needed.  So where to sit?  There was a more drinkers based room around the corner, with the obligatory pool table and a few raucous sounding locals, but the room I was in was warm, bench seated comfort with nautical themes, etched mirrors, interesting old pictures, and could have been perfect if it was for 28 (yes I counted them!) knives and forks wrapped in yellow napkins.  'Optimistic about Tuesday lunchtime diners much?' I wondered, as a Scouse sounding girl in pink walked across my cutlery shot and told me she wasn't at her best today and hoped she'd not got in my photo.  I assured her she had been at a safe distance, and left her a BRAPA card so she could keep tabs on her most famed moment in history!  She told me she didn't work here 'really', whatever that meant, but then joined the landlady and some old dude in a top quality bitching session about staff & locals & probably idiot pub tickers.  I was closest to ordering food here than anywhere else, but I'd just been to Co-op so resisted the amazing seafood.  A very 'nice' pub, superbly done out, but lacking the IOM 'oomph' of many others. 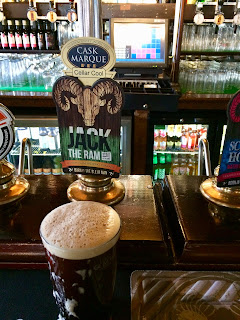 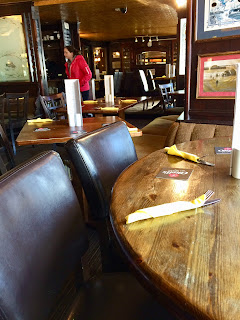 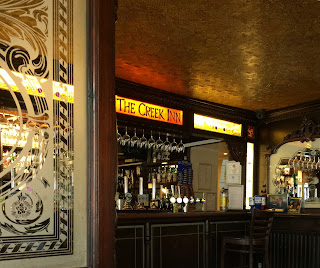 My final Peel pub was more central to town, and the bus back, and was interesting in that it had the coveted 'Isle of Man Pub of the Year' award at present.  It looked nicely unassuming. 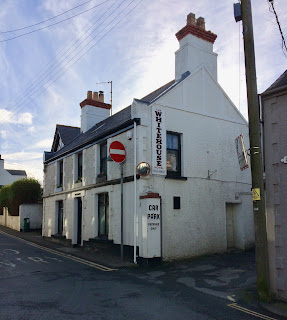 All the best pubs have a difficult latch that you have to work out before you can enter.  I think of places like the Cover Bridge Inn in East Witton and that weird Welsh place in Bedford.  Anyway, am sure you have your own examples.  And from the moment I "pushed the latch all the way down" and walked into the small dark room where a friendly old lady greeted me warmly, I knew why this was a pub of the year.  You could almost smell it in the air, the still centuries old basic brilliance.  I could see just two beers, a local Ruby Mild and a Chocolate Stout from York!  Piss off York, leave me alone, I'm on holiday.  I went with the Mild, I think she was surprised.  A scouser on the other side (he wasn't dead, just around the corner) was whining in a demanding fashion about taxi times, logistics and the like.  I think this had been going on for a while, as she was getting a bit short with him, and eventually rolled her eyes to me.  I nodded and grinned.  You must have to have the patience of a saint to work in a pub I reckon.  I sat in the little front bar, the landlady tells me there's a spotlight above my head but I told her I enjoyed the dark, it was creating a good atmosphere!  Hope I sounded mysterious rather than weird, but don't bank on it.  The scouser had changed tack, thankfully, still whining though.  He can't eat mackerel or herring, they get stuck half way down.  With the whole pub resisting the urge to get a bucket of these fish and ram them down his gullet, my bus was getting close, and I needed a final wee, before leaving.  Quality. 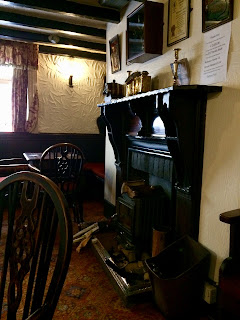 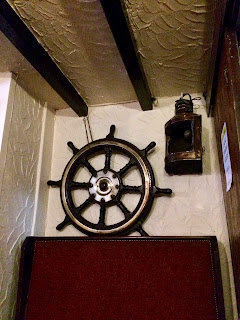 Half an hour or so later, I was back in Douglas so decided that before my afternoon 'break', I'd knock off another Douglas pub as there was plenty to do.  My strategy was to do the Douglas pubs 'on the way back from other things' rather than spend a full day at them.  I walked around the corner of the bus station to find this pub staring back at me ..... 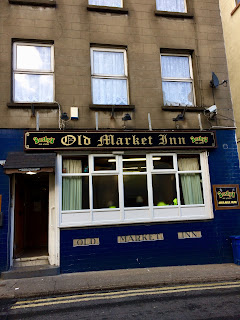 Had I walked into the front bar immediately to the right where the characterful hi-vis gang were enjoying a few afternoon pints, I'd have definitely had an experience to rival the Bridge Inn at Laxey on my first day.  I'd seen and heard them, so the decision to go into the back room wasn't a total accident.  I couldn't see the pumpclips so the helpful young tall chap with glasses who barely fitted in his small bar area decided to give me a taster of the two Busheys beers on offer with his tasting notes.  Talk about making me looking even more of an outsider than I already did, but it's okay cos he was only being helpful, I guess!  As I sat door, one by one, the hi-vis gang who sounded like a bunch of Irish Navvies "Feck dis, fuck dat" all peered over to see who I was, so I kept my head down in my GBG!  The only other man on my side, "Silent Bob", reacted to nothing, and went to the ladies loos next to me and groaned with an air of a man who simply doing it to see how I'd react.  I didn't.  The barman, who didn't seem an ideal fit for the clientele, tried a Barry Scott Cilit Bang joke, which went down like a lead balloon, as did his acoustic guitar playing.  I felt rather sorry for him.  The hi-vis gang told an anecdote about a pregnant woman who was in labour in the hospital.  A drunken man they knew wandered in, tried to get into the same bed as her, and when she refused, he tells her "move over ya fat bitch!"  This pub was truly mad, the hero of the hour came in the unlikely form of a well spoken teenage boy, recently bereaved, back from a funeral with his grandad.  He tried to get some Arsenal / Spurs 'banter' going, and was soon chatting to me about Hull City and BRAPA.  The least likely person you'd find in here, but also the best!  Crazy place.


I'd had a very kind offer from local Twitter legend David Halliwell.  If I wanted driving to some of the harder to reach pubs this evening, he'd be more than happy.  I couldn't pass a chance like this up, as much as I like my independence.

So for now, it was back to the Ellan Vannin for food, quality local water, sleep and catch up on 'Neighbours' before my lift arrived.