"They're creepy and they're kooky, mysterious and spooky, it's all a bit like Newquay, the Preston family".  Yes, it was that inevitable time in history where Hull City decreed that we should return to one of the first ever towns I visited with a BRAPA-esque agenda in mind.

Back in 2003, my sister became a student at the University of Central Lancashire, and armed with a printed Autoroute map with various GBG pubs plotted on it, I went to "visit her", doing all those amazing pubs like Black Horse, New Britannia, Dog & Partridge, Market Tavern, Stanley Arms, Old Vic etc etc.

We also went to the Black Bull where my sister returned a dodgy pint only to be told "you students are all the same .... if you can't handle the flavour, go back to drinking lager luv!"  An old local turned to her and told her not to worry, even the locals hate him.  Fond memories.

Today. me and Dad walked from the station to the Ashton-on-Ribble part of town in the drizzle, and shock horror, an 11 o'clocker according to the GBG actually was open at 11am .... 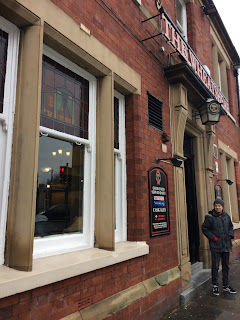 And who should be propping up the bar mid-Blackcurrant order but the ill looking figure of Thomas J.Irvin, third in command on HMS BRAPA.  As Tom coughed and spluttered his way through the order, he got zero sympathy from Dad or myself, we just didn't want to catch his germs.  "Don't touch my sleeve!" he warned, I've heard that one before.  I was only semi-recovered from my own 'woman-flu' (cos man-flu isn't real) in any case.  I ordered a Robinson's Unicorn (SBS B), an ale I forever associate with Preston as I first had Robinson's ales on a great session in the Black Horse on my debut, the kind of pub experience which probably shaped why I'm passionate enough about pubs to undertake a challenge like BRAPA.  The pub was large and expansive, a raised area for live bands, heated smoking area, pool tables and screens.  No wonder a large group of millenial Sky Sports lads were roaming the premises in a pack, like a bunch of Carling zombies putting accumulators on random Premier League games.  An outdoor mural of man, dog and cat was realistic enough to keep Dad entertained, "is that man real?" was a question that occupied him for a good 10 minutes.  Excitement was perhaps, in short supply, but this was a solid start to the day. 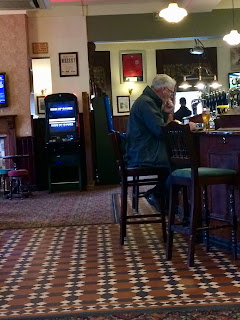 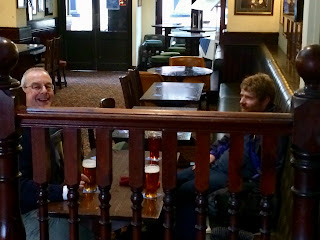 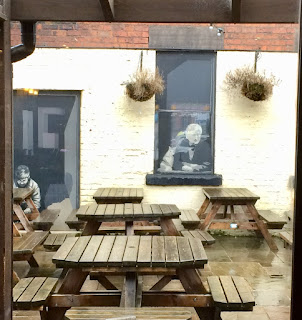 A long straight walk down Aqueduct Street (where I once went to a grimy punk rock gig in a venue that probably burnt down years ago) took us to pub two, where I intended to keep us til pre-match as the other two made sense for the journey back to the station after the game ......

Approaching it, it actually looked more closed than the shut Daniel Thwaites pub just before it, but here we were and i did an unnecessary Eric Morecambe style pose, must be the Lancs effect. 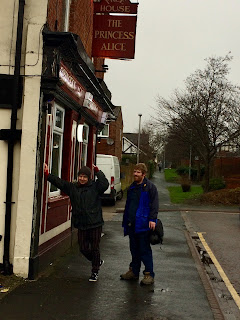 It's a sports bar, I was told - but to me, this was a fairly basic real-life pub (bench seating, carpets, beermats) with 15 TV screens in.  Yes, FIFTEEN.  It wasn't even that big a place.  There may have been more, 15 was what we counted.  Headache inducing.  About 10 were showing a live game on Sky, the rest showing football focus.  As Mark Lawrenson silently mouthed some nothingness, a puffed out Matthew Lawrenson arrived to create M.Lawrenson confusion.  The paisley shirted one sat down with us for a pint, it was all Lancaster beers, not my fave, the red was a bit dull (SBS C) but their new Citra more tolerable (SBS B+).  I revealed my Hull City colours, and the three silent TV clones pretended not to stare, but I may as well have had leprosy.  In fact, leprosy is preferable to Hull City supporting in the current climate.  It was a semi-friendly pub though, lots of people saying "ow do cocker" and weird Lancs stuff on the way to the loo, and only when a gang of twilds resembling a scene from Oliver Twist appeared, did the atmosphere threaten to go down hill.  Matthew chatted with some locals he recognised who were never gonna engage Hull outsiders, and despite the pub getting very busy, 'twas a gentle pre-match session.

We then had the regular 90 minutes plus of regulation dross against a team that pretty much anybody apart from Hull City could've beaten.  We are going down, to funky town!

Post-match then and Dad decided to 'try' and get the 17:27 so we said farewell as me and Tom went in search of today's third pub to drown those sorrows: 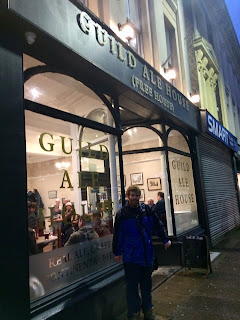 I wasn't thinking 'Micropub' on entrance, but as I shouted my order over the top of a load of bar blocker scum, they told me they didn't do cordials and that is the first sign on any micro bingo card!  So Tom stuck to tap water, and I tried to make a joke out of it coming freshly from some Preston spring, which made nobody in the room laugh apart from myself.  We perched on a shelf at the edge of the room, and a black wraith like figure bounded down the stairs, it was the pub dog Luna, the sort of black Labrador that convinces me that dogs can win the 'BRAPA Pub Pet of the Year' award if they are this lovely and well behaved.  Matthew caught us up and joined us for a pint again, this pub was very much reminding me of the New Brew-m in Burnley and not cos I was drinking an increasingly good Reedley Hallows (beer of the day at SBS A-) but it had that feel good post-match atmosphere, very much a more 'mature' clientele.  Tom was pained by a newspaper front page staring back at him, it was the lovely Gillian Anderson saying "I might be with a woman next year".  'So why does this pain you so?', I asked poor Tom, well it turned out the girl he'd been chatting up back home was a lesbian!  Poor Tom, not his week.  But he'll be back stronger for it.

We walked back towards the station where we shook the disease ridden hand of young Irvin who had a train to catch.  Matthew used his local knowledge to take me to final Preston pub in this year's GBG.

As the crow flies, it was almost next door to the station, nestling between railway line and river.  But those crazy town planners had made it such, that you had quite a trek around the back streets to get there...... 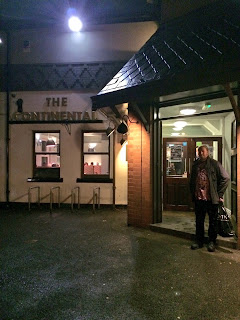 So much so that with the low lying mist (may have just been my eyes) and the smell of coal fires outside, I was expecting a peaceful old pub inhabited purely by quiet old farmers.  Okay, so my 1977th total pub should perhaps have been punk rock to some degree, but what I hadn't been expecting was a sort of glorified dining pub, with just enough concessions to the drinker to make it 'acceptable pleasing'.  After all, they had enough ales on and I had something from 'North' which might be L**ds containing something called Mandarina which sounds irritating, but it was a very pleasant SBS B+ nonetheless.   Matthew acknowledged another of his local drinking friends, a younger Cap'n Birdseye who looked like a Horatio, but had a name like 'Chris' somewhat sadly.  A deep sea diver walked through, as did a trendy version of the Elephant man, and perhaps this is the true joy of Preston.  You'll never get bland.  It's a proper town full of proper characters, and that leads to satisfying pub experiences.  Okay, you evil people will laugh and joke at their six fingered hands and very closeknit family ties, but these are lazy stereotypes which blogs like mine are trying to eradicate by not mentioning them.  Quite frankly, you should all be ashamed of yourselves for reading this!

The journey back to York seemed to take FOREVER, and that was with moving carriages to get away from some noisy Hull City scum.  Back in York, I wasn't quite ready for tea so popped into York Tap to use the facilities and have quick half.  I was just sat in peace minding my own business, when a crazy gang (not Wimbledon FC circa 1989) turned up eating Egg Salad sandwiches, stealing each others phones, and generally being strange, like a BRAPA cry for attention just when I was winding down and NOT wanting to be observant.

So after that late craziness, it was time for a KFC Zinger Burger which I can still feel 23 hours later!  Tomorrow is the first day of my Winter BRAPA holiday.  I'll be checking in on Twitter early evening in a pub you won't be able to guess in a million years, probably!