It was time for the bi-annual 'Heavy Woollen' BRAPA trip, where after months of planning and last minute cancellations, a small group of work friends join me for some pub-ticking.

This time, we had a record low turn out of three (myself, ever present Jason Garrett, sometimes known as 'Mr Angry' though he's got a heart of gold really, usually, and Piper Corday, my half Irish Tranmere fan, cat loving 'North Bar' drinking buddy, making her fourth BRAPA appearance).

After a large breakfast (Jason managed six extra sausages!) and pain-staking journey across the Pennines, we arrived at Crime Street Railway Station at 10:58am, our first pub a short walk down a Peaky Blindersy cobbled street.  It had opened at 9am. 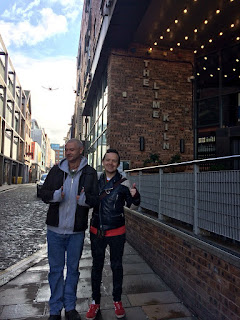 And despite the 9am opening time and large modern frontage, I was still surprised to find it was a Wetherspoons, or a Lloyds No 1 bar to be precise.  Not sure what the difference is, it is probably boring, Piper wondered if these were the ones converted from former banks but doubt it.  All I can see is, if I compare it to say the often dreadful Beckett's Bank in L**ds, they have an upstairs section and a more modern interior.  The GBG entry, reading between the lines, said "you'll think this is bullshit but stick with it cos beer is decent" and a quality Oakham JHB was a nice light starter (these Heavy Woollen folk are heavier drinkers than me).  The place also felt like an aircraft hanger for Hens (not the birds, well kind of, as in 'Stags and Hens') and lots of loud Prosecco ladies dressed like 1997 Mel B before noon felt a bit disconcerting.  We sat at a window seat, the pub fairly dark otherwise but not in the good atmospheric way.  It was okay, but can't see it worrying the 'classics' (most of which I think I've already done) for best pub in this excellent pub city.


After navigating a few side streets, the Liver Bird Clock (if it exists) chimed 12 noon, we passed pretty Chinatown, and the next pub was in sight.

It was time for me to say the only thing I can in a Scouse accent "Why don't the government just admit that they got it wrong?" but Jase and Pipes reckoned I was going to get us lynched.  I simply thought I'd be accepted into their bosom as a local.  It didn't happen.

And it was one of those were you climb a couple of steps, push the unlikely door and are propelled inside, head first, towards the bar!  I'd not been looking forward to this as last year, I came here on a Stag do only to find it heaving, smelling of paint, sparsely decorated, it was it's first day re-open after a refurbishment.  We walked straight back out.  But what a difference six months has made!  A very cool modern place, some cracking bits of local artwork for sale - quite often, I think the quality is poor when pubs do this not that I'm any Brian Sewell (only in pub terms!)  A very friendly helpful barman was determined to make sure Jason chose the 'right ale for him' (probably heard about his reputation) from a top local selection.  Great atmosphere, music that actually helped the ambience (how often can you say that, not very often?!) and we all agreed it was a good step up from Lime Kiln, Piper declaring it her pub of the day.   Before I could blink, Jason returned with a second pint - something non cask!  Duh-duh-duh!  Well, this was a BRAPA rarity too, as he let me have a few swigs of the cold fizzy 'goodness'.  I reflected it's good practice for when CAMRA put pubs in the GBG which just sell keg filth and tell me I have to be more modern and open minded.  Can't wait.

On the way to the next pub, Jason asked me if I was ever tempted to go into pubs that aren't in the GBG.  "WHAT KIND OF MONSTER ARE YOU?" I replied, before admitting pre-emptives were 'a thing'.

It was a relevant question in that I must have walked past this pub a few times, as I'd been to things like the excellent Peter Kavanagh's and the Belvedere down here, avoiding one called the 'Blackburne Pub and Eatery' hoping it'd be removed from the Guide.  It was.  But I'd been blind to this pub.

And this was my personal favourite pub of the six we visited today.  Despite a bit of evidence of vegan students with their sallow faces in the tofu troughs, it felt like a down to earth scouse boozer in many ways.  Jason's beer had just gone, but a good 7/8 of it had been pulled.  "We'll only charge you for a half, that's how nice we are!" he says, "fine" I say, trying to take charge "as long as it tastes ok" and the poor guy behind the bar looked offended, but I had to ask, didn't I?  Anyway, it was fine, I ordered something called Blond Moment, nervously looking around to make sure I wasn't offending any millennial blondes,  and we sat in the middle of the room where a little dog (certainly no twog) called Marshall was running around and getting much affection from all, such a cute characterful thing, BRAPA pub pet of the year so far.  Who said a dog would never win it?  (Tom Irvin actually).  Come on pub cats, up yer games yer lazy buggers!  Marshall's owner nipped out to the shops, leaving the confused creature under the general care of the pub.  Bad mistake.  Marshall escapes.  Jason shot out of his seat, ran into the road, and saved Marshall from being roadkill on a Chinatown menu later that night.  (I'm joking of course .... not enough meat on the bone).  Phew!  Jason went to the loo.   Owner returns.  Barmaid tells story of escape & rescue.  Owner thanks the staff.  Jason, yet again, the unsung hero, misunderstood.  Wonderful pub this, please visit.


Join me on Friday as I review the other three pubs visited.  Would it get messy?  How many of them would be good?  Who'd miss the train home?