Why am I sat here on a Saturday afternoon in the comfort of BRAPA towers, when this is my prime pub-ticking time of the week?  That is a question you may well ask.

Well, like an utter buffoon, on walking out of the KComm Stadium last night in Hull, I forgot I still had two steps to go, totally lost my footing, fell, and twisted my foot, as a steward tried to make a lame jokey comment.  Perhaps I'd been so shocked to see Hull City win a game?  Perhaps it was bad Karma for protesting against the evil owners for 90 mins (I didn't blow a whistle or throw a stress ball though)?

Anyway, I thought I'd "walked it off" on the half an hour trek back to the car, but perhaps that was the anaesthetic offered by the 9% stout I accidentally ordered in the Whalebone pre-match, "Dark Ratanic Mills" by Rat Brewery.


Woke up 6:30am, ready for train to London, I couldn't really put any weight on it and it had swollen up like a golf ball.  So frustrating, today was the day I finished Bucks!  I hate Bucks,  I've decided.  It makes Bedfordshire seem like Stockport but with pink ale thirsty faeries skipping through a meadow.

So change of plan, 10th March will now be my Bucks completion date (unless Martin Taylor has got the bunting out and warned the residents of Abington Piggots I'm on my way).  That would make 7th April my official Cambs start date, but in Ashley, with Abington Piggots to be done hopefully with Martin 13th May, but I'll confirm.

For now, I'll leave you with the second part of last weeks trip to Liverpool......

This was the kind of modern bullshittery that I always fear when I return to a big city I've visited before, which has new GBG entries to tick.  From the moment we stepped inside, Piper said "god, we don't belong here!"  I didn't have to say a word.  One eye-roll skywards at the shabby chic ceiling and weird air duct tubes put me in mind of 'Pleased to Meet You' in Newcastle, combined with a modern 'Spoons.  When the GBG says "not your average pub grub", you've gotta be afraid.  Not even that glorious sight of a well kept Titanic Plum Porter could raise my mood, or the hospitable well groomed staff with pearly teeth and the kind of tans you don't get in Liverpool on a February afternoon.  A rare British earthquake happened whilst we were in this pub, well it happened in South Wales but was apparently felt in Liverpool, but not here, the kind of place to neutralise any interesting geological quirks.  On the plus side, interest did occur when a lady groomed her dog on a customised doggy mat, and then got her female companion (mother?) to hold the dog still whilst she did a photoshoot with it.  It was a heartwarmingly fun moment, just not at all my kind of place.

Onwards and back towards the station then.  I should probably admit I'd drawn a pub map, perhaps one of the worst ever but Piper and Jason were quite taken with it, and seemed to think I should be using it instead of my GBG App to find our way around.  I'll let you judge ...... 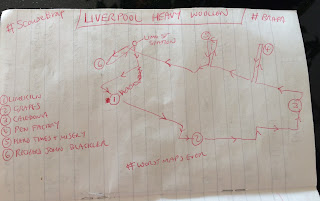 Perhaps that was the reason it took us so long to find our next pub, Jason even had to angrily ask a poor bohemian cafe owner.  It was the tiniest most unlikely door on the whole street, though we had missed the blackboard outside ..... 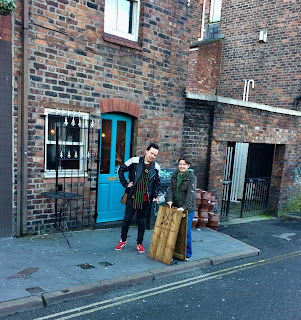 Felt a bit like a micropub on two levels, though they might just call it a "bar", one of those where you have to breathe in to get to the bar where a genial young scouser had that kind of look in his eyes like "right, hit me with any question about the beers you want" but we denied him the opportunity.  Jason prodded me in the chest for the umpteenth time and said "Now look Simon, write nice things about this place in your blog because it is the best pub we've been in all day!"  Although I couldn't agree, I promised I'd try my best and granted, upstairs had a superb feel, the old cliche "it's like walking into someone's front room" sprung to mind, although a front room probably designed by new age hippies who have a love of artisan gin and vodka.  Very relaxing. 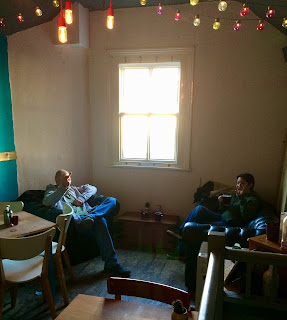 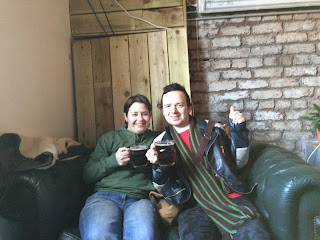 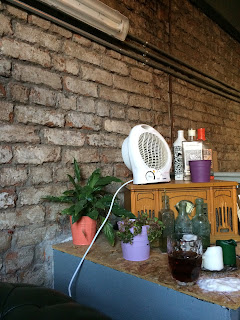 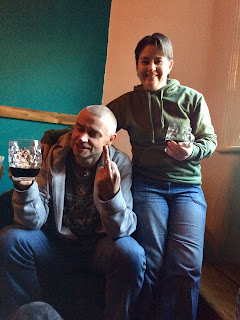 It was carefully thought out strategy that saw us end at a Wetherspoons.  Firstly, it was very close to Crime Street station.  Secondly, my memories get a bit hazy this far into the day and I figured that 'Spoons can be a bit samey and hard to review at the best of times, so I'd not lose a lot here.  And thirdly, Heavy Woollen days traditional have a confusing messy end! 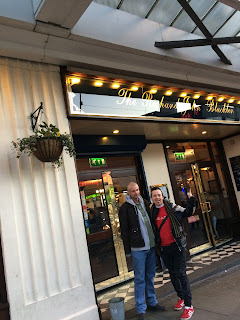 And it was your large rambling traditional Wetherspoons (more so than Grapes)  as we walked in and I somehow remembered I had 'Mudgie' vouchers to use still to save 50p, always a bonus.  I tried to tell Piper and Jason, reading from the GBG, that it used to be a famous department store, and George Harrison from the Beatles did an Electrician's apprenticeship here, but they were about as underwhelmed by that fact as me, proof not everyone gets starry eyed over the nations favourite mop top scallies.  And here's the key really, had say Sid Vicious served an electricians apprenticeship here, this Spoons would probably have been edgier, more exciting and colourful, though he'd probably have electrocuted himself on day one. 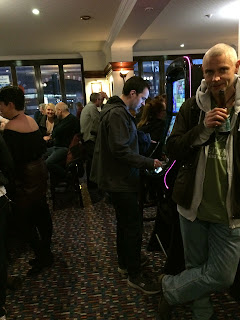 Jason wanted to get Chinese food (from Chinatown), but I was never properly onboard with the idea due to missing train potential, so after a reluctant 5 mins sat in a taxi not really going anywhere, he admitted defeat, we came back in here, but he still needed food so I told him and Piper to go, and I (slowest drinker) would nurse my pint.  He prodded me in the chest again "if you miss this train, there'll be trouble" he said, so I promised it was the last thing that'd happen.  After 10 very pleasant minutes alone, I found Piper looking lost, Jason had vanished.  We got the train, he missed it.  Ha!

A typically messy end to a Heavy Woollen day, as we planned an East London trip for July's next outing.