7:15pm then, and I'd eaten and slept and caught up on 'Neighbours', slightly traumatised by a storyline involving a cat being poisoned!  More hard hitting than anything you'll see on Peaky Blinders.

I was picked up in front of the Ellan Vannin by IrishSeaDave from Twitter (and real life), a great chap with his fleecy collar and cuffs, he looked like a guy who knew how to protect himself from the Isle of Man winter.  He likes cricket (the sport, not the insects), ticking off heritage pubs and 'islands' so we could understand each others mentality, and he was very easy to chat to.

Our first pub was the one I'd identified as 'the most difficult to reach', slap bang in the middle of the island with limited bus service and opening hours but it was very much open when we arrived.

I mentioned that I'd been to Foxdale to many people over the course of the week, and I got the same bewildered expression each time, followed by "Why would you want to go there?" and several references to inbredness and 'they are a very different', and this coming from island folk who are hardly bohemian metropolis city dwelling darlings!  And true enough, this was the one pub I walked into, said hello, the locals turned and just stared, and bear in mind I was with Isle of Man pub royalty so had I been alone, I may have been eaten.  The day was saved by landlady Judith, a lovely friendly lady who's turned the pub around recently due to sheer hard work, making it bed & breakfast etc.  But it's still a locals pub at the end of the day, and they wanted us to know it, chatting and roaring with laughter so we had to raise our voices to chat at the table by the door!  They may as well have been Manx Cats, spraying around the pub walls to mark their territory.  Before that, Dave had given me a quick pub tour, great old photos, roaring fire, this was a splendid pub.  You'd think then that this pub would encapsulate the spirit of Isle of Man more than any other, yet Dave thought it was strangely 'untypical' of the island, and 25 mins later, I had to agree, but hard to put your finger on why!  As we prepared to leave, the jukebox had been turned up to 11 and the six locals had paired up and were slow dancing around the pub!  Brothers & sisters, husbands and wives, it  was hard to tell!   As I returned our empties to the bar, a local said "go on you two, have a dance".  "We've only just met!" I told them, and we legged it back to the car!


Our next pub was another 'difficult to get to on public transport' one, despite being listed under Douglas in the GBG, it is a few miles to the west in a business park in Bradden, just outside.

A modern estate pub in a Business Park in England means one thing, soul destroying bollocks but with annoyingly top quality ale!  But Isle of Man being Isle of Man, even this offering managed to be good.  Not that many of the inhabitants of the island appreciate this, for again, when I mentioned it later on the holiday, people made out it was rubbish.  They seriously don't know how lucky their local pub scene is!  Okay, so it was untypical in that it contained women, kids, some younger drinkers, and an echoing clatter of glasses and cutlery.  Like the Terminus yesterday, it is Heron & Brearley (again, I need you to picture a puzzled looking wading bird being expected to bowl a googly just by using a wing).  Modern, yet done in a quality way, it still had the traditional pool table, though I've never seen such a large group of folk make such a fuss over what was presumably how to get a match started!  Seven of them swarming around the table stroking the baize and looking confused when I glanced over on way to loo, very excitable/heated discussion.  We supped our Okells beers quite happily, and there was an element of comfort.  I'm jealous of the Isle of Man! 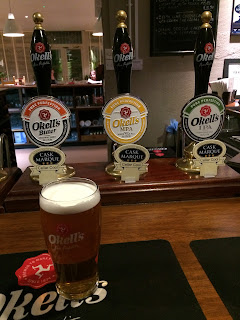 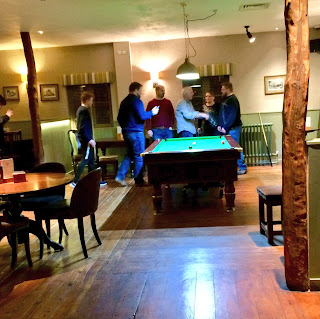 Dave was still awaiting 'the call', picking someone up at 10, so he suggested we get another one of the slightly hidden away Douglas pubs.  I wasn't going to say no, I was in full BRAPA mode.  Here it is ...... 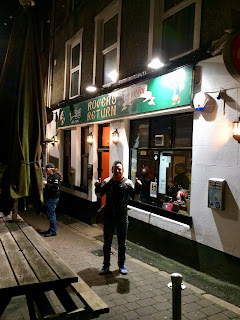 I often say the best pubs are impossible to describe using words alone, and that would be true of this place, a contender for pub of the week.  The benchmark was set early in the piece, as we entered the surprisingly busy and noisy pub and tried to peer at the beers.  The bar blockers obscured the view, and were told in no uncertain terms by our landlord Colin, to shift their asses so we could see what was on offer.  There was even a sign above the bar to this effect.  That never happens.  Colin was a superb chap, one of those who oversees the entire pub with an effortless aura about him.  I could imagine him in a Lord of the Rings / Game of Thrones pub scene, telling unruly goblins and wenches to simmer down, and this was the thing with this pub, it was more like a fantasy indoor village with it's own culture and customs than an actual pub.  Before I knew it, we were chatting with a slightly drunken man with far too many vowels in his name to be able to pronounce.  I was told about the breweries on the island, and given a load of Bushys stickers - they seemed the punk anarchist brewers on the island with Hooded Ram the evil corporation, Okell's somewhere in between. I briefly met a couple from Warrington and won bonus points for saying I loved the Lower Angel, a pub a bit like this.  Then I was told about a crazy York City fan with crazy hair who'd probably have loved to meet me!  Just when it couldn't get stranger, I was taken to this hidden room which was a shrine to Blackburn Rovers, one of the only teams Hull City have beaten this year.  I stuck my head through a secret hatch to the bar for a photo, then we were allowed behind the bar for more.  What a whirlwind experience, but I'll not forget it in a hurry! 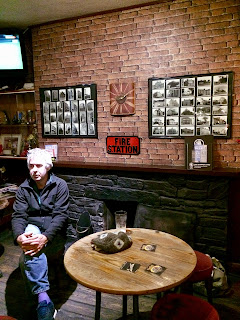 It was hard to get away but we just about managed it.  Dave's other half Angela, was having a late finish to her Bridge game so there was time for one more, hidden a bit in the backstreets of Douglas. 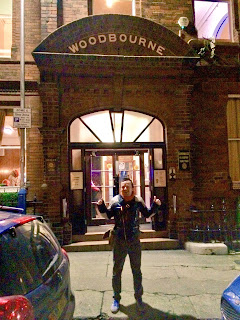 Let's face it, any pub experience was going to be a 'come down' after the RR, but in true Isle of Man style, it managed to produce another pub of immense quality here, feeling like quite a grand old Victorian place with hallway entrance and rooms off in various directions.  We went in the small back bar to the right, once a Gents only room, the sign and the locals within made you feel it was pretty much still Gents only in all but name(!)  Not an experience I've had since Loggerheads in Shrewsbury.  I think there were quite a few ales on from memory, and Dave showed me the caricatures of various staff members and regulars from days gone by, many of whom were still remembered.  Dave nipped off to get Angela, so I perched and tried to 'collect my many pub thoughts of the night' til they returned, at which time we retired to the cosy front lounge-like room.  I say cosy, I felt cold thanks to a family, where the young Harry Kane son and his Dad were both wearing shorts, on a freezing Feb night.  A genetic hot-leg disorder perhaps?  Or a family tradition?  It made me feel even chillier than Tanned Ankles in Onchan the previous night.  Had a nice chat with Angela, she too a Blackburn and real ale fan, though she insisted I was a 'scratcher' and not a 'ticker'.  If you tick beers off, you are a ticker.  If you tick pubs off, you are a scratcher.  I'd been told.  Although she fully supported the inclusion of the brewery section in the GBG, I tried to explain why it's removal had been necessary for a scratcher such as myself.   It had been a brilliant night, and they dropped me off back at the Ellan Vannin just in time for my curfew, electronic tag just beginning to bleep!