As I recover slowly from an epic week on the Isle of Man (I'm all pubbed and beered out), I give you the following piece from the wonderful Matthew "SeeTheLizards" Lawrenson, who joined us on our Preston BRAPA trip a week ago ..........

Knowing that BRAPA was coming to Preston for a while (a simple perusal of the Championship fixture list confirmed such things), I hatched my the 3rd of February 2018 for plans well inadvance.  Using the copy of the 2018 Good Beer Guide on a local pub shelf (you expect me to buy it, man?), I worked out which pubs Si had yet to visit.  And of course, the most sensible route to prevent wear and tear on my aging knees.

I went into "preparation overdrive" on the Friday, even downloading the latest edition of BEER magazine from the CAMRA website.  Being fairly low down on the membership list, my print copy takes forever to arrive via the eighth-class mail that CAMRA pay for. But no matter, I had some sort of copy of the "pub ticker" article contained therein featuring Mr. Everitt on a half-page spread.  I proceeded to show this to Preston pub landlords, telling them "If you see this man, do not approach him and do not engage him in conversation.  Should he offer to show you his green highlighter pen, contact the appropriate authorities."  My work done for the day, I went to bed nice and early with a can of Dead Pony Club.

Saturday eventually dawned, as we knew it had to.  I mentally ran over my mental route map for a final time and congratulated myself on its economy and efficiency.  Taking the 41 bus to the our famous architectural gem/ hideous monstrosity (delete as applicable), I arrived at the Black Horse at 11am for a pre-BRAP pint.  "Just a Wizard, please." I chortled to the barman.  Noting his bemusement, and possible concern over me ordering a far weaker beer than usual, I reassured him that I had a long day ahead and didn't want to leave the premises in what is euphemistically called my usual state.

Looking over the York-Preston trains the previous day, I'd worked out that the BRAPA Train (similar to the Royal Train, but with more pies and fewer corgis) was likely to be the 1148, so I stood as near to Platform 2 of Preston Station as the Northern Rail goons would let me.  Actually arriving on time, it disgorged its passengers, but although there were a few orange shirts, Si's was not amongst them.  I got out my phone to send a "are you delayed somewhere?" tweet, and found he had already arrived and gone to his first pub of the day, completely blowing my route plan.

After standing there dumbstruck for several minutes, unable to comprehend anybody wanting to be in Ashton at 11am, I left the station and trudged down Fishergate Hill.  Unbeknownst to tourists, Strand Road is full of places of interest - such as a Harley-Davidson dealer, the local psychiatric hospital, and a good view of the first house I ever lived in back in 1976 (the blue plaque application is "ongoing", or so they tell me). 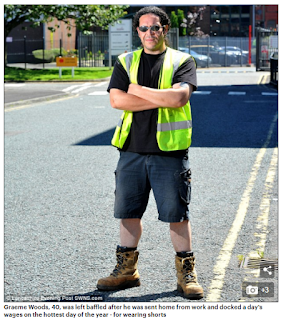 ​Not so swanky now everyone has devices, eh Woodsy?

But for me, the top attraction in Ashton is no longer there.  This was the local Blaupunkt shop and it sold gadgets and car radios.  I went to school with the son of the owners, one Graeme Woods, used to make everyone jealous by bringing in things like handheld TVs.  Yes, I know, but this was 1985.  Imagine my surprise when, not having heard of him for nearly 30 years, I got told of a link to an article on the Daily Mail website :

Ahem.  Anyway, I reached the Wheatsheaf itself by 1215.  I walked in and there was nobody behind the bar.  There were, however, several local types at the pool table who looked as if using cues and balls for their intended purpose was an atypical occurance.  The Everitt party had wisely departed several minutes previously.  After imagining what would likely happen to those with my sartorial choices in a place such as this, I did the same.

By now, Si had announced he was on his way to the Princess Alice.  Thankfully, a part of the route I had planned for.  Just to make sure I caught all the potential drizzle, I walked through Acqueduct Street at a brisk pace, passing places I hadn't been past for years and looking nothing like a I remembered.  Looking at a sign on a multi-unit warehouse, I realised I'd had no idea Preston had a Model Railway Club, especially one within sight of the bridge carrying the West Coast Mainline between Glasgow and Euston.  I assume the members indulge unrealistic fantasies by making their model Pendolinos run without disaster. 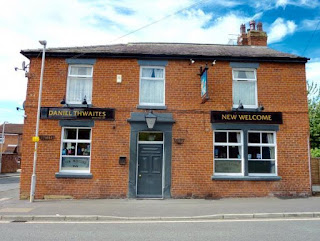 I gotta get used to not living next door to Alice
​
The Princess Alice, Plungington

Another 15 minutes walking, and I reached the unmistakably purple and Lancaster-signed Alice quite out of breath.  Having had Lancaster Brewery beer in the past, I made sure of ordering one that I wasn't absolutely certain was crap, some Citra thing.  Thankfully, the pub was nearly empty, its TV screens outnumbering punters two-to-one.  I had finally caught up with the Everitt party, though.  Everitt, Irvin, and Everitt had given themselves prime views of both the TVs and the pub expanse in readiness for spotting customers and staff being ridiculous.

Si was on the phone to his mum, assuring her that although, yes, he was in Preston, he had yet to be murdered or poisoned by butter pies.  And that Hull City were likely going to be thrashed today.  I begged to differ and profferred my opinion that it would be 1-1.  Si shook his head in the way that only someone who regularly  watches the Tigers away can.

After his call ended, Si wondered why I hadn't gone the same route as him as, obviously,  The Wheatsheaf was an 11am opener and surely that's the most sensible thing to do.  I thought about getting out Google maps and comparing distances, but I was too thirsty for such pedantry.  He then remembered he needed to do a charity selfie and, upon deciding I was the least scary person in the pub, decided I was to be the subject.

"Are you sure you don't want to smile?" he asked.  I told him that had I done so, the Beer Twitterati would hound him endlessly, saying "Where is the real Lawrenson and what have you done with him?  You can't fool us by just putting a random grinning dude in a paisley shirt and passing it off as the real thing."

I can't recall much of what was said as, as I had warned beforehand, the place filled up completely with lager lads and their bizarre offspring.  Little did these children know, they were in the presence of the greatest child-mocker since Robert Helpmann.  It's probably best they didn't, really.  We probably discussed Lancaster beer and how much cheaper it is in Preston than in Lancaster itself.  I said that hopefully Heysham Nuclear Power Station would explode soon and destroy Lunesdale, if only to save Simon a visit to the Lancaster Brewery tap.

It was now 2.15pm, and time for me to head off to town for food.  Simon said he would be drowning his sorrows at the Guild Ale House after the presumed one-sided thrashing and would see me later.

"Guild Ale House?" I said "Watch out for the dog!", and departed laughing