BRAPA in ...... A HAZY SHADE OF WINTERTON (AND BARTON PARTY TIME)

It'd been a promising start to February ticking with a couple in Bridlington and one in Driffield, as Tom and I wound our way back into Hull.  It was hard to ignore that Hull City had lost 1-5 at home to Brentford, but when you sell your two best creative players on the same day, what do you expect?  Surely we won't get relegated from here, but then again, League One would be great for BRAPA ...... there's only so many times in your life you can go to Derby, Nottingham and Reading. 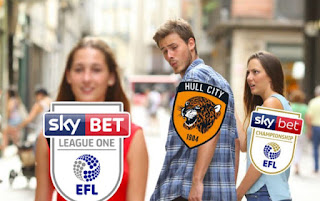 Tom, like all good Egyptians (not the Allam's) was living in denial, and only seems to recognise the U23's and U18's as actual Hull City so he didn't care at all.

Time for a BRAPA substitution, Tom (his fitness levels not the best) was replaced for Father BRAPA who was waiting in his car looking thoroughly downbeat.  I told Tom I'd see him at the party later, but for now, Dad was driving us to two North Lincs pubs.

We decided to sack off Kirmington the Frog and especially Barnetby-le-Something for a variety of reasons, in favour of a South Ferriby return, but first up was Winterton, which has a GBG regular I've been itching to do for years ....

And the rumours I've heard down the years about this pub can officially be confirmed, George Hogg, Winterton (1713 / 2930) was a traditional jewel of the highest order.  The biggest surprise being the appearance of a Bass pump.  I'd joined a Bass Facebook Appreciation Group in the week, and had been planning to post something when I next had a pint of that most mystical real ale, but expected it to be months off!  Proves you only have to leave Bass free Yorkshire by a few miles to have a chance of finding it!  A characterful (moth eaten, itchy) dog stretched out on its lead as far as it could to try and get some affection/food off us, and Dad was haunted by his 'gym anthem' by Maroon 5, 'Memories', to prove he has more contemporary accidental taste in music than his son.  Really good pub this, one to restore your faith in a part of the world which never quite does it for me pub-wise.

Well, I tell yer what, I never expected to be visiting South Ferriby so soon after my Boxing Day trip, but the Birthday Girl herself said the other pub in the village might have a bit of pre-emptive potential (understatement?) and being on the road between Winterton and Barton, it made sense to get it chalked off. 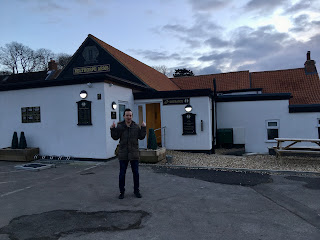 Tucked away down a warren of back streets, the Nelthorpe Arms, South Ferriby is a refreshing alternative to those of you who might find the Hope & Anchor too much of a posh dining establishment, and crave something a bit more rugged and traditional.  The locals were the type who like to perch, and glint a curious glass eye at you on arrival almost daring you, the outsider, to be the one to crack first and say 'hello'.  The whole place seemed to tinged with an underlying yellow sepia, though that could be what my liver does to my eyes five pints in.  We breathed in to circle the narrow bar area, where the lone real ale was hiding.  Probably a wise decision, when I think about places like Habrough and hear about some of Martin Taylor's North Lincs beer quality experiences!  Speaking of RM, a Sooty charity box screams 'you are in a proper pub' even if the yellow bear himself only screamed in an episode where a genie played by Bernard Bresslaw gave him a voice  (I'm a Sooty expert if you wondered).  The barman even did the 'izzy wizzy let's get busy' spell for me as he pulled our pints!  His daughter looked at me like I needed to grow up.  Not sure Doom Bar glasses really help an ale (unless it is Doom Bar) but without sounding patronising, I guess this pub is still finding its way with real ale, bless their little cotton socks!   We sat in a back room where a Hull City twild had to fend off awkward 'bantz' from two Dad's and three other kids who all supported Premier League teams like West Ham and Crystal Palace.  I guess we are kind of down south here!  We laughed at a photo of South Ferriby's attempts to stave off the Nazi invasion in the war by building a half-arsed roadblock, but otherwise, the beer was ace, people were great, and it'd be a worthy addition to the 2021 GBG.


Time to say farewell to Father BRAPA, after that wonderful cameo, as he drops me in Barton at Ben's house (son of Birthday Girl Christine) where I was staying the night.  Tom and other assorted Irvin's were just being let in as I arrived, so perfect timing.

Ben gave me a bottle of ale and he got his Mum round for this amazing Birthday slideshow, which was all pics of us in the 2008/09 at various home and away Hull City games.  I hope he can send me some cos many are in pubs that count towards BRAPA, and you might be amused to see us 10 years ago!

Christine said "Si, I've got a surprise for you when we get to the party" which was being held at GBG entry, the lovely White Swan and I assumed she just meant a nut free curry, so imagine my surprise when from behind a corner, Duncan Mackay appeared! 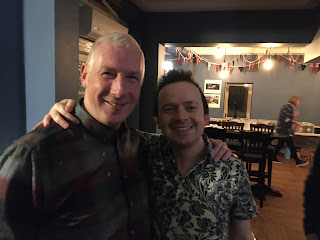 And even though it was my first time meeting the pub ticking legend, it didn't feel like it, and all the nice things everyone like Martin Taylor and Quosh said about him came true, what a gent!  And his other half, the lovely Rikki/Ricki/Ricky was there too, and if we add to that the likes of West Brom Aiden, Chris Irvin, Bernie Irvin, Tom, Ben, Christine, Chris Douglas, Colin, Lizzy, Mark Beefy Bainton, Scunny Sarah, Leicester's Brother Richard (not a monk) and probably more, there was some serious former BRAPA pub ticking power in that room, probably more than has ever been assembled under one roof!  It only needed Martin to abseil down the chimney to complete the picture, but I blocked it up with the 5,000 brewery pages from the 2014-19 GBGs so he couldn't get in.

After eating curry with my fingers (cos I forgot to get a knife and fork, not cos I was trying to be authentic), my attentions turned towards the fact that I still needed to visit a Barton pub called the Wheatsheaf, though the room seemed to be split on whether I'd been before.

'Can I just sneak out and go?' I whispered to a few, and one party guest who we won't name replied "Just go Si, no one will even realise you've left!"  WELL ISN'T THAT JUST CHARMING!

Christine, proving she wasn't too addled yet, drew an elaborate map on the back of a quiz where we had to guess her age over the years (my Pub Tickers F.C. team scored a woeful 5) so myself, Chris Irvin, Duncan and Rikki stepped into the chilly night air at 10:30pm, I had map in one hand, Google Maps in the other, but I think the others knew where we were going anyway ......

I must confess, the Wheatsheaf, Barton-upon-Humber (1714 /2931) didn't look familiar to me, but then again, if I did go, I was probably in a mental state similar to this one.  White Witch seemed like a sensible beer to drink at this point, and Rikki went to sit down.  She seemed glad when we joined her, for a slightly pervy Billy Connolly type was chatting to her.  Turned out 'Cap'n Connolly' was a welder, and Duncan used all his pub experience by pretending he was interested in his welding anecdotes, persuading him looking like Billy Connolly was a good thing, before Chris Irvin chipped in with a (word perfect) joke BC told on Parkinson about buttocks and parking your bike.  I'm glad Duncan could remind of all this after the event, as on leaving the pub, I reviewed my notes and wailed "waaah, all I've got is buttocks and a capital P!"  Seemed a nice pub anyway, at least I have witnesses to prove I've been now though watch Duncan deny he was ever there with me when I overtake him and claim I've officially completed the GBG in the year 2041! 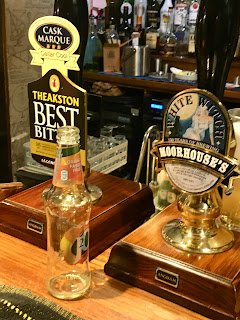 Back to the party, which was winding down nicely and people were propped up against walls and doors with their bodies hanging at strange angles.  Back to Ben's for a cup of tea and two episodes of Father Ted.

A great night, great party, and when you can fit Adolf Hitler, Duncan Mackay, Bernard Bresslaw, Sooty and Billy Connolly into the same blog, you know something has gone seriously right/wrong!