(And had I been able to ride to a pub called the White Swan, the blog title could've been more amazing). 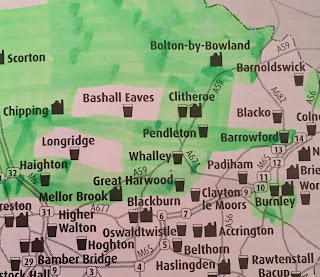 Tuesday 11:30am, and Father BRAPA picked me up from the Yorkshire Bank after a good 3.5 hours of Static Data joy.  I like Static Data.  It doesn't move.  We were Blackburn bound, and what an opportunity this was to get some awkward Lancastrian ticks in before the match.

Even with the benefit of Dad's car, planning seemed a struggle with so few pubs open before 4pm on a Tuesday, if it all.  I had a vague plan which meant starting at Accrington's Canine Club and moving on to places like Wheelton and Darwen.

I'd even rung the BRAP-elusive Black Bull on the outskirts of Blackburn itself to see if despite normally being closed on a Tuesday, they make a concession when Rovers are at home.  A man with a healthy Lancs burr told me they don't.  My THIRD Black Bull fail, I WILL get you eventually!

With Storm Ciara blowing a gale, we had snow one minute, bright sunshine the next, and Dad took an 'educated alternative route' which saw us climbing up past the likes of Ilkley and Skipton, where we passed the front door of three former BRAPA pubs - the rather nice Flying Duck, touristy Woolly Sheep and eminently forgettable micro snoozefest, Early Snores.

Further north than anticipated, time to pull out the battered GBG and reassess the options.  Clitheroe made most sense, two pubs needed, both open noon apparently.  You have to adapt in this game. 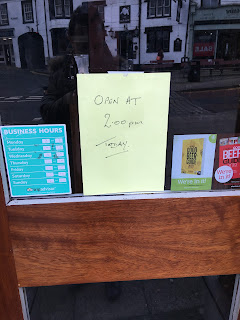 Dad thought he could see a man sat in there in the dark!  But no need to get upset, it was already gone 1pm and a 'Beer Hall' with shitloads of handpumps was lurking about 10 minutes away.

Some accidental photobombers got their BRAPA moment of fame .......


One of my more highly anticipated modern GBG ticks, there's been quite a lot of talk about the Bowland Beer Hall, Clitheroe (1719 / 2936) , mainly people wondering how a town like Clitheroe can handle so many handpumps on the go at once!  I did a circular tour of the bar to count them today, and it's the first time since I walked around the bar at Clapham Junction's Falcon that I've needed to stop half way around for a Kendal mint cake tablet and a rest.  27 I counted including ciders and Bowland's own, and I see the GBG this year talks about 24 guest ales rather than the 42 handpumps it mentions in the 2019 edition.  An elderly gent in a flat cap shuffled up,seemingly recommending the ales with a label sticking out of them, but we'd already chosen two which didn't have labels, and no idea what he said in any case!  The building itself and complex which holds the Beer Hall was really impressive (architectural awards n all that!), and they didn't scrimp on heating which is always a danger on days like today in places like this.  There were a good number of people in, mainly ageing ditherers looking for lunch and asking far too many questions of the patient staff.  Unfortunately my ale was bland and lacking any spark, but Dad's tasted good at least.  In a rare concession to your trad pub, we found a bookcase in one of the quieter rooms of this majestic rabbit warren, and it had GBG's and Wisden Cricketing Almanacs.  So engrossed Dad got in trying to work out whether Ian Botham broke his own 1981 record in something, he nearly forget to drink up! 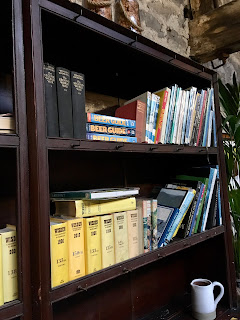 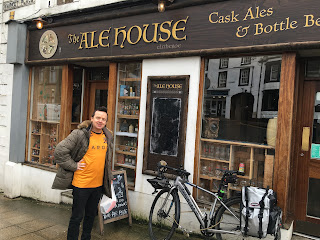 And cosier than it appeared from the outside too, I was a fan of this place, certainly one of the stronger pubs of the day.  I suspect some locals had come along a bit before 2pm, seen him closed and sat in the dark reading his paper, banged on the window "ey up lad, get yersen oppen!" (or whatever they say in Lancs) because the locals at the bar and a couple in the side room looked nicely established and settled into their drinks.  I enjoyed asking for 'Two Girls Blouses' from that Problem Child place in Parbold I didn't massively enjoy a few month back, and it was quality stuff and locals smiled warmly and talked about going back to sheds in Darwen to touch them up with a fresh lick of paint.  The loos were interesting cos when I set off upstairs, I heard a bar local say he was off for a pee and he set off following me.  But he must've found a magic tradesmen's staircase for I heard a neighbouring toilet door lock when i reached the top.  I've long since given up trying not to look like a first time visitor on these pub trips, and this is exactly the reason why.  Is there really a second staircase?  Comment below if you know, it is slightly bugging me.  Great pub this. 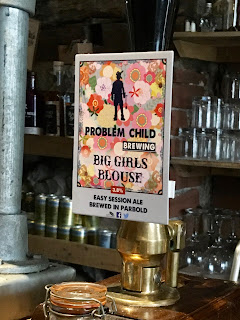 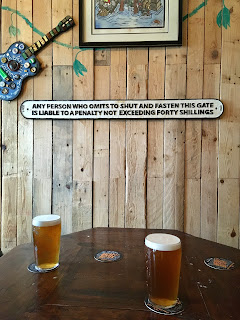 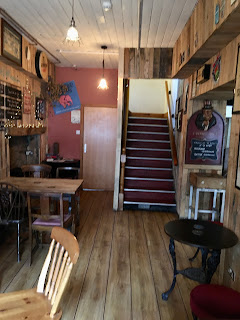 I knew I was expecting a lot of Dad's chauffeuring skills next, as we continued west out of Clitheroe and almost ended up in Preston for heaven's sake!  Also his SatNav was obsessed with the M6, whether we needed to be on it or not, and this was compounded by roadworks and heavy pre-rush hour traffic.  Ugh.

With some relief, we parked up at pub three.  I'd even found the zip for my coat!  Things were picking up ...... 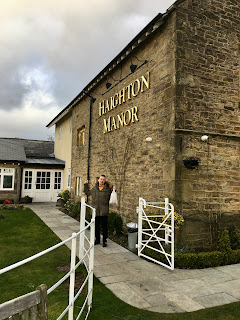 Hang on, there was something slightly familiar about Haighton Manor, Haighton (1721 / 2938).  Rural location.  Plush grounds.  Former country house hotel.  Roaring fire and rugs on entrance.  Quirky Victorian prints on the walls.  Uniformed staff trying to look authoritative but failing.  House beer.  Men in suits stood next to farmers with sleeping dogs.  Oh yes, it just had to be a Brunning & Price.  In a 'pub moment of the day which amused me far more than it should, Dad sensibly orders a coffee, and as she gives him the options, he chooses cappuccino.  She's not concentrating though.  "Did you say latte?"  "No I said cappuccino (though to be precise, you said cappuccino and I said yes!)"  replies Dad.  Then Whitney Houston belts out "I Feel So Emotional" as Dad's cappuccino arrives and he theatrical plops a sugar lump into it, our hapless barmaid returns to try and light a candle for our table but nearly fails and sets the table alight.  Oh I don't know, it might not sound much in retrospect but I didn't laugh this much in Clitheroe, and certainly not Blackburn later on.  The Brunning & Price Spotify playlist then blasts out a bit of Billy Joel, Queen and probably Savage Garden and Runrig.  Dad suddenly looks shocked and exclaims "WHY DO THE BEERMATS HAVE A PICTURE OF THE  CORONAVIRUS ON THEM?" 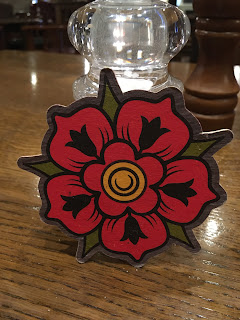 "Errrm Dad, that is the Lancashire rose" I tell him gently.  Though similar effect on us Yorkshiremen, I admit.  Warm and amusing with good ale, Haighton Manor had done the job for us.


Still time for two (three if I was very lucky) pubs, as well as the match.  Could Hull City win?  What would our pub of the day prove to be?  And why did a man start chasing us down the street, shouting?

Find all of the answers to the questions you never asked, and more, tomorrow night in part two.