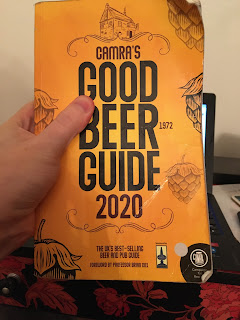 For this title to be even more impressive, I'd have to have bid Dad farewell in Crook, and caught the next train to Hook in Hampshire, walked to Hook Common and visited the Crooked Billet.  Not sure how it would compare with today's pubs, but if you've been, please comment below and I'll almost certainly forget to reply!

Just to recap, Father BRAPA and I were having a rather splendid day on the bus 101 route west of Durham City despite some rather inclement weather.  Stanhope, St John's Chapel and Frosterley and all delivered, and more.

Back at the bus stop in Frosterley, we had one more stop en route to Crook, to a place called Wolsingham.  I kept pronouncing it Woll-singham, but the locals kept correcting me "Wul-singham" and I might be wrong, but I maintain they all need to read a bit more Hilary Mantel or C J Sansom.

As we waited for the bus, and thank the lord we had a shelter, the weather took yet another turn for the worse, which I tried and failed to capture on camera, both with and without filter ..... 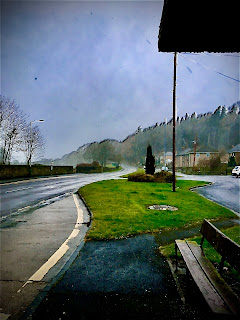 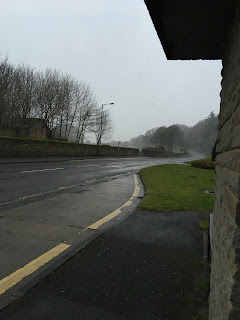 Bus mercifully arrived with me waving a desperate frozen thumb at it, and the village of Wolsingham wasn't far off.  A quick uphill manoeuvre off the main drag, and the pub was buried down a side street with a majestic pub sign, which had it fallen down in the wind, would have almost severed this hapless pub ticker in two ........ 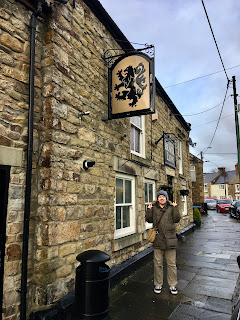 Another understated (apart from its commitment to Cider fame) gem from the west Durham stable of top pubs, the Black Lion, Wolsingham (1732 / 2949) only suffering slightly in that it wasn't the magical Black Bull at Frosterley.  But with pubs like Square & Compass in West Cornforth and Frog & Ferret in Spennymoor in mind, there is something unique about a pub atmosphere in a no frills boozer late on a Saturday afternoon.  I ordered a pub's own 'Old Herbert' ale cos it had a silhouette of a cat smoking a pipe on the pump!  And all became clear when we went to sit at what appeared to be one of the only free seats to find a pub cat curled up asleep.  This must be Herbert then?  Because I respect cats more than most, I softly sat on the bench at the far end, resisting the urge to go in for a stroke too soon!  But Herbert seemed unfazed by any amount of pub clamour, even when some young lads at the bar got excited by Sunderland suddenly starting to win comfortably.  We'd been instructed by Stanhope landlady Diane to say hello to her best friend, Sarah-Jane who works here, but without wishing to 'assume gender' I didn't see anyone who fit the bill ..... so I assume she was off on some Sarah-Jane Adventures (that one's for the kids and nerds of 10 years ago).  Not a lucky pub for Hull City either, we'd been winning 1-0 when we arrived, but lost 2-1 as soon as we got settled here.  Boo!  A fourth really nice pub, could Crook keep it going?


The bus into Crook was surprisingly, another one of those minibus things I thought were only reserved for those hairy journeys west of Stanhope.   We were soon back in the town, the rain had stopped, it was getting dark and all was well.

Rewind back to a bright sunny day on 3rd November 1962, and a 15 year old Father BRAPA was one of 9.484 at Boothferry Park watching Hull City's 1st Round FA Cup tie at home to Crook Town.  Despite taking an early lead, we were 1-4 down by 49 minutes and the ground was stunned.  But a great comeback saw us win 5-4 and Dad has been intrigued by Crook ever since! 57 plus years later, and he's finally got to go.  I hope it lived up to expectations (It didn't).  Another noteworthy moment from that day is that it is the only association football match that Duncan Mackay hasn't attended since 1945, and that my friends, is a #BRAPAfact 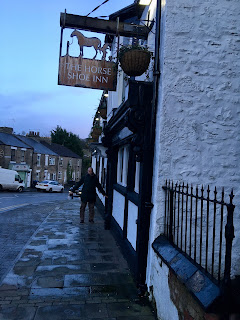 I'm not one of these anti-Spoons pub goers like I know some people are, but despite having read that Horse Shoe Inn, Crook (1733 / 2950) was indeed a Wetherspoons, it didn't look or feel like the usual model from either the outside or in - and I kind of really appreciated that.  The biggest clue was the heaving clamour at the bar, and if the mean streets of Crook had been deserted since we'd stepped off the bus, well, it felt as though the entire town was here!  The Double Maxim was as warming and health giving as you could hope for, strong though, which may or may not be connected to my classic 'hazy fifth pub of the day memories'.  Fair to say we both viewed the experience positively, though my notes make little sense, particularly the part where I've written "women does it look like the face of someone who could be ....." What does that even mean??  On the way back from a typically Everestian climb to the upstairs gents,   hungry Father BRAPA was fumin'.  "There's a girl there with a totally untouched bowl of chips.  She's just crying to her Dad.  She's never going to eat them!  Tempted to pinch one".  Well, on the way back from my pee, the sobbing girl had been picked up by her Dad and they were on their way out, table all but deserted, I pinched one and should've probably brought Dad the bowl for efficient staff were cleaning the table within seconds.  It wasn't a good quality chip in fairness, and I made myself sound worse on Twitter than I really was.  "Free styling chips from the heart of a crying child!"  someone commented with probable raised eyebrows.  Quote of the day.  And an enjoyable 'Spoons experience from what I remember. 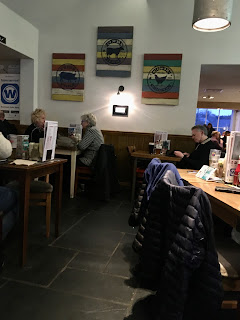 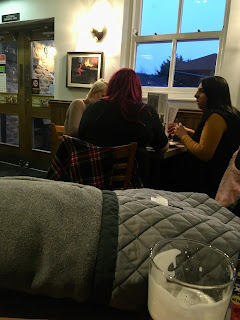 We couldn't linger though, as our other Crook pub was for some unknown reason, a mile uphill away from town.  So we had 20 minutes to march up the hill, and 30 minutes in the pub before the last bus arrived to take us back to Durham.


Yes, perhaps naively of me, I'd thought 'Crook', 'out of town', name like Copper Mine (1734 / 2951) , it is gonna be fabulous rugged, probably verging on a WMC, or at least a WC!  But never assume anything in this game, this was a restaurant, but in a pub's body with a pub's atmosphere which made it all the worse.  At least 'Running Waters Three Horseshoes basically said "oi pubber, don't expect much of me", at least Metal Bridge's Old Mill said "yeah mate, we're a posh gastropub, deal with it!" and at least Sedgefield's Dun Cow said "we are fantastically upmarket, charge a fortune, but at least you can see we do it with style!"  And none of those three, or to my memory ANY pub I've visited in the GBG has had a sign telling you that you can't just go and sit down.  Okay, a couple of them have moved us after the event, which is sort of worse, but here Dad and I felt all we could do is perch at the bar and feel like second class citizens.  Only toilet anti L**ds Utd graffiti by a West Ham fan who'd made the Hammers kind of phallic brought a smile to my face, and two drinkers next to us also wore gloomy expressions.  Reading the GBG entry now, it talks about 'distinct drinking and dining areas' so I apologise if it has a drinkers bit we simply just 'missed'!  Oh well, you can't win 'em all, the other 5 experiences had all been good (or better). 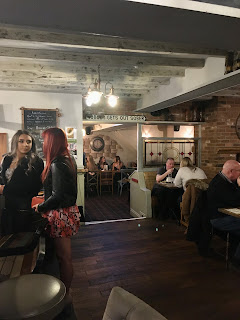 But at the bus stop, further disaster as the bus listed on Google Maps and the timetables online wasn't showing on the sign!  Nooooo.   Only thing for it, back into the 'pub' for a swift half and a taxi (and the beer was 'fine', but surely there must be limits as to what the GBG lists, even if it is a BEER and not a PUB guide?)  The staff weren't exactly bending over backwards to help, until the first number failed us, they saw the desperation in my eyes, and got me a card with a more reliable number on!  Good job they'd not seen my thoughts on their restaurant.

Just when we (well Dad) were panicking and trying to get into the wrong car, the right one turned up, we breathed an all mighty sigh of relief, and were back at Durham station with time to spare!  Phew.

So a chaotic end to a day which had for the most part been brilliant, so it didn't spoil it!  And if I could rehydrate myself, get a good square meal, and an earlyish night, I thought a cheeky rare Sunday trip might be on the agenda......

Join me for tales of that one tomorrow.  Oh look, Hull City have lost at home to the bottom team.  League One beckons.  Bring on exciting new towns and pub ticks!