Back in glorious Durham again (they'll have to start giving me a loyalty card, or the keys to the city or something) and this time, Father BRAPA and I had no problem finding the bus station, despite it having the most low-key dingy entrance in bus station history.  Where are the bright flashing lights beckoning you in?  If Rotherham, Peterlee and Consett can manage it, surely Durham can?

The X46 took us to Crook.  Father BRAPA has a special affinity with Crook dating back over 50 years which I will explain in Part Two, but when I started Co Durham, this was the one town he was desperate to see first hand.

In squally icy rain with a gale blowing (it is becoming a habit), we sheltered in the shelter looking for bus 101 to take us west, Crook acting as the last bastion of civilisation.  Yes, it was THAT desperate.  A series of ageing men who all looked identical waited alongside us, gurning furiously against the bitter wind.  One whistled.  For ten minutes.  I've heard of Whistler's Mother, now I've met his Father.

The 101 bus route is perfect for the GBG pub ticker.  EIGHT pubs I counted across it, including the two in Crook.  The 'interchange' to use the term in the loosest sense is at a characterful little town called Stanhope.  Hourly buses run here from Crook, some terminate, some carry on west into even more rural climes.  It is wild out here!

Of course, being BRAPA, we were on the 'wrong' hour to carry on west so we terminated in Stanhope, meaning we had an hour to enjoy our first pub, the sun had even come out ....... 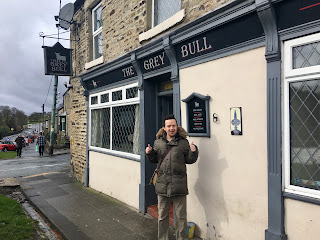 And enjoy it we did.  The Grey Bull, Stanhope (1729 / 2946) was the thriving, bustling community local that you picture in your mind's eye when thinking of classic north eastern boozers.  Despite the weather and the relatively early hour, it was awash with high spirited locals of all ages, 50/50 male female split, all presided over by Mr Grey Bull and lovely wife Diane.  Here, we were made to feel entirely welcome from the get go, and the sight of my Good Beer Guide and green Stabilo only enhanced their sense of curiosity.  Dad just beat Diane to the highlighting ritual, but she came over to read the description, and righted a couple of GBG wrongs (the phone number, and no, they don't offer accommodation, but you might be able to sleep on a bench if things get desperate!)  With two of the three ales being Marstons (we went for the Allendale, and quality it was), I asked if they were owned by them but was glad to hear they were a free house.  Turns out it was in Mr GB's family two generations back, it then skipped a generation, before the option to buy it came available when the previous landlord ran off with a barmaid!  'Everything happens for a reason' we agreed.  She then told us about her temperamental hens and Stanhope's popular open air swimming pool, which (if open) you'd have to have been brave to jump in on a day like this! 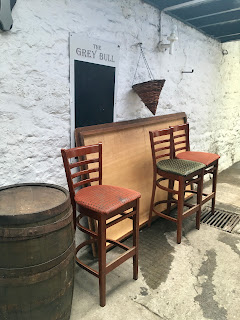 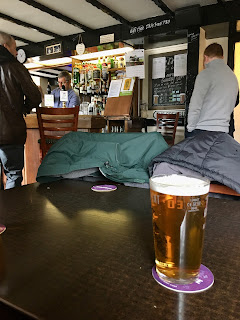 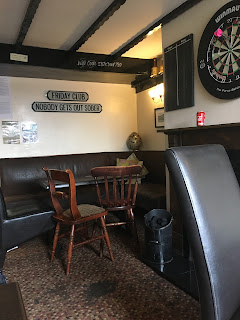 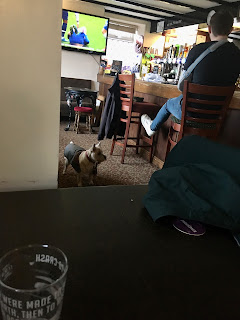 Back at the bus stop, unfortunately situated in the middle of temporary roadwork traffic lights for added 'will they / won't they' peril, the rain was sideways again by now.  A bus appeared, but he just opened his door and shouted "I'M NOT YOUR BUS, BUT HE ISN'T FAR AWAY" or whatever the N.E. accent equivalent is.  Just sounded like a load of vowels to me.

And as if to accentuate the feeling that Stanhope was the absolute end of the line and anywhere further west was the back of beyond, it was a minibus which arrived to take us on to pub two, the furthest one out at St John's Chapel.

As we hit barren landscape, the rain turned to heavy snow and we were both paranoid as to whether this pub would actually be open.  I won't lie, 'twas a HUGE relief when I saw the door open .......


We were greeted by a very pleasant young barman at Blue Bell Inn, St John's Chapel (1730 / 2947) and gentle giant pub dog, Boris, who dropped his favourite toy at my feet, perhaps hinting it was in contention to be Martin the Owl's replacement as BRAPA mascot 2020.  Still no decision has been made, but I politely declined Boris's offer.  The barman was shocked when I announced I had a better phone signal here than in Stanhope, and then there was the inevitable but amiable 'weather' chat.  With a roaring fire in the front room, pool table at the back, and every single customer (okay, there was only about three of them) saying 'hi' wherever in the pub you went, this was a glittering village gem, and although it perhaps wasn't as memorable as the Grey Bull (we were here for a limited time before the minibus came back the other way), part of me enjoyed it just as much, as it was a pub that kind of allowed you to 'breathe' away from the relative jovial mayhem!  A local went to take an eager Boris for a walk, Dad meanwhile was suffering from the kind of nosebleeds he only usually gets in a Catholic club (remember Billingham?) with the constant change in temperature.  I had to neck my pint to some degree, and when I told the barman we were sad to rush and leave so quickly, I was entirely genuine, but he was so much in his element watching Sco v Italy Six Nations in front of the fire, we seriously doubted whether he minded that there were customers in or not!  Lovely pub. 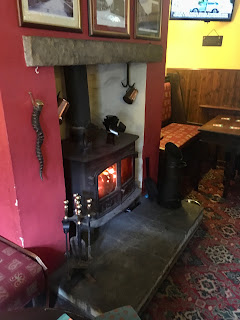 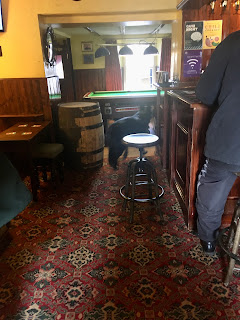 We couldn't afford to miss the minibus as we'd have a two hour wait, and strictly speaking, we'd set off from York a lot later than we should've done so were already working off a tightish schedule.  So it was a good job the bus services was reliable today.

He turned up on time, true to form.  Now the next GBG village along was Westgate which didn't open til 6:30pm so that was out of the equation.  I'm hoping summer hours are more generous.  After that came Eastgate, we'd seen from the window that it was open, but it pairs well with Westgate and being on the '2 hourly route', I decided we should get back to Stanhope and get back to the '1 hourly route' as we could still make up six pubs for the day.  Phew!  You keeping up with these tactics?

Bit of a surprise when the minibus actually stopped to let a bloke on.  Even more of a surprise that rather than saying "Single to Stanhope, driver" he just launches in with "I'll tell you who's died .... Keith Reid!"  I couldn't stop laughing.  Tricky in a confined space.  Dad gave me a sausage roll to shut me up.  RIP Keith Reid. 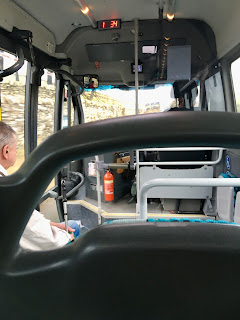 Back in Stanhope, of course we had to hop off the minibus and hop on a bigger one, which took us down to our next village where after the help of the lovely Diane in the Grey Bull, we knew was the one just down the bank nestled in the valley that Dad spied earlier....... 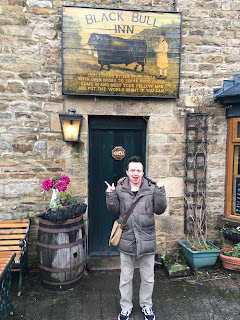 On a day of scintillating pubs (especially the first four), the Black Bull, Frosterley (1731 / 2948) managed to be the ultimate stand out favourite of the day for us both.  It had one of those unquantifiable timeless qualities from the moment you stepped inside and saw the sepia / tobacco tinged walls, the impressive collection of jugs hanging from the ceiling, the creaking mutli roomed layout, it even smelt of your mother's finest Christmas dinner!  It didn't so much feel like a pub from another era, but from a different dimension.  The Scottish landlady was super welcoming, and the Sonnet 43 Milk Stout was the dark beer we'd been crying out for, and lacking up to this point.   'There's no weird ale in Weardale'.  I'm trademarking that.   'No we don't want to look at a menu, we're smuggling our sausage rolls from Dad's bag' is something I didn't actually say out loud.  One gripe, the ticking clock.  Tick tick tick, non stop, for an hour.  A very small gripe!  A lady overheard me bemoaning the lack of phone signal down here in the valley not allowing me to check the exact time of our next bus.  Her attempts to assist were fairly hopeless, but with the help of the landlady, we soon got it figured out.  Humphrey Smith would've barred me.  But don't think there was no drama here.  "We had a frog causing chaos on the doorstep earlier, customers couldn't get past it!"  I wondered how big this frog had actually been?!  You know, there was the odd dining family and even an element of twildery in here, and yet, it didn't damage my enjoyment of the pub in any way.  Sign of a true classic. 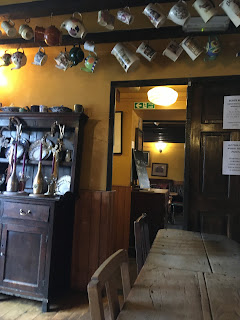 We were clawing back the time nicely.  Could we get our remaining three ticks in?  Could the day stay this great?  Of course not!  Join me Wednesday (probably) for part two.

Thanks for reading, it is always appreciated.