BRAPA is ..... BURYING THOSE SHEFFIELD DEMONS

New Year's Day 2020 might go down in BRAPA history as one of the most depressing days of pub ticking.  Nearly everything in Sheffield was closed, 'flu was starting to envelop me, and Martin the Owl declared he was a Wednesday fan.  So scarred was I by the experience, I've vowed to never try and visit a new pub on NYD ever again!

But by the last day of the month, I was clawing back my numbers nicely, and if I could visit three on the night of the 31st, I'd end January with 31 pubs for the month.  A pub a day keeps the doctor away.

Speaking of which, my hometown of York was now the U.K. epicentre of the Corona Virus outbreak, and it was time to use it to my advantage.  Walk into a bar, announce I'm from York, cough dramatically, and watch everyone dive out of the way.  Result = no problems getting served. 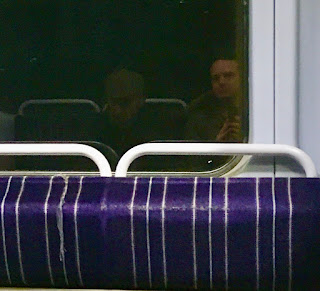 Not that anyone told Mr Flatcap on the painstaking pacer to Sheffield on Friday evening, he had the whole carriage to aim at but still sat with his leg on my left knee.  Old men sitting on me has been a January theme I'll hope doesn't spill over into Feb!

A probably pointless tram to ShALEsmoor and an irritating ten minute walk to my first pub followed.  Back on NYD, police from Newark heard I was in the area, hoping to perform a P.I.S.S. (Planned Interception of Si, Sharpish) operation, so I had to hide in the Shakespeare ....... 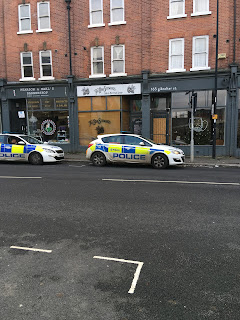 But the coast was clear today, though I pulled my fluffy hood over my eyes on entering, just to make sure ...... 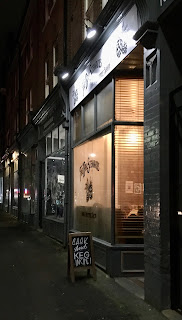 Bar Stewards (1707 / 2924) was the place, and everyone was far too hipster and chillax to take heed of any York coughing.  Service was brisk and high cheekboned, and the place was teeming with folk dressed as French mime artists and jugglers.  A couple in their sixties who looked like they should be on Stones or Tets in a WMC carefully poured cans of craft beer and discussed sediment and temperature.  This was a serious beer place.  I only stepped away from the bar for a second to take a photo and I immediately lost my perching place.  Soon, I only had a beer fridge to perch on and had to play the waiting game until a corner seat became available.  This place had a fresh vibrancy and warm character which set it aside from some micropubs I've done in Sheffield, there was even a Bowen / Grosicki hybrid chap with bright blue eyes who pissed twice in quick succession - nice to see players coping with Transfer Deadline Day in the best possible way i.e. drinking good beer.  I even ended up trapped in my corner, and nearly knocked out an arty looking group with my giant rucksack on the way out, cutting short hushed talk of a microbrewery in Loxley.  Tough times. 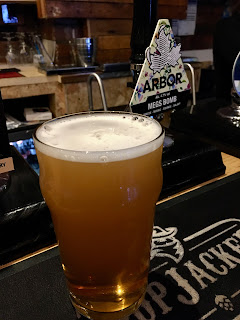 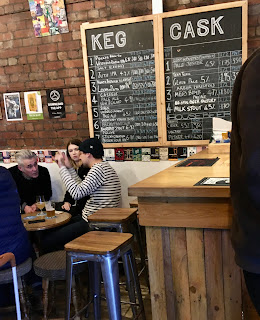 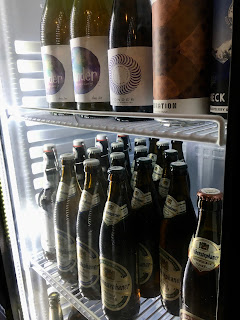 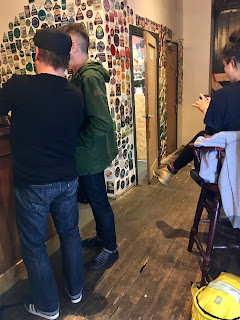 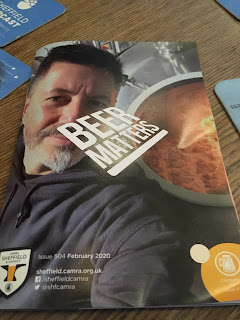 I continued the walk down the main road to the pub that looked 'most closed' on NYD, with no discernible pub sign even making me wonder if it was closed down altogether.

Nothing could have been further from the truth tonight, and even from the bridge across the river, I could see a heaving chattering balcony with a huge red neon sign with 'Let Love Speak Up Itself' on it, a reference to a Beautiful South song.  They might be one of Hull's most famous exports, but Mr Heaton is still a Blunt. 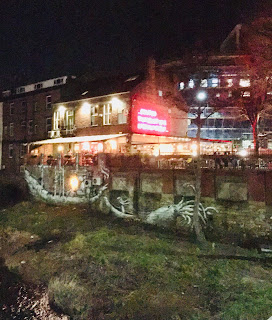 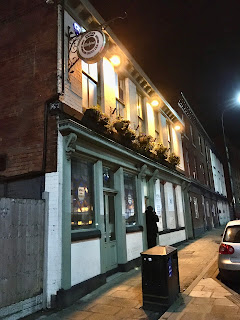 Remember my recent strategy to make Thursday my new Friday for 'after work' pub ticking?  Well, the Riverside (1708 / 2925) would be the perfect illustration of why this might be a good idea.  If I'd thought Bar Stewards had been busy, I'd seen nothing yet, as this, on tonight's showing at least, was little more than a student fun pub selling excellent real ale.  I went for the 'Reveller', it seemed wholly fitting, and apologised to about 15 people as I fought my way onto the heated balcony where at least I could breathe, perching my a bench overlooking the river, smiling gingerly at two large groups of what seemed to be Spanish students having a smoke and a laugh.  Not that at any stage of my half hour here I resented the atmosphere, it was quite novel really.  Rare you get this in BRAPA, and everyone was happy and it took me back to my student days in Sunderland.  All that was missing was a bit of Hooch, Metz, Smirnoff Ice.  And a bit of Madonna covering American Pie, Santana doing Smooth with Rob Thomas, Clint Boon's White No Sugar, and Natalie Imbruglia belting out Torn.  I think this current crop wondered why I was stood along looking down into the river with a twisted smile on my face,but I was definitely less suicidal than I looked, and that I guess, is testament to the Riverside! 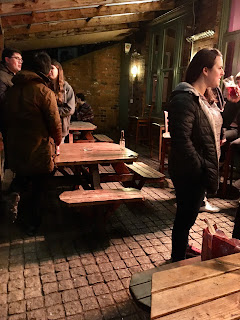 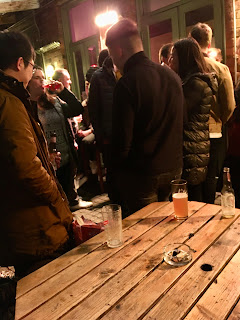 I was down to my next fiver so tried to use this cash machine, but the buttons didn't work!  A crazy old dungaree dude tried to help, thinking I just didn't know how to use cash machines.  He followed me for a bit trying to shake my hand, I think he meant well, not sure I've seen my bank card since.

I then dropped my fiver in a patch of soil by the roadside for added peril, the wind blew it, and I had to dive to retrieve it, and was relieved to finally reach my third and final pub of the night even if my phone did fail on me at the vital 'outdoor' photo moment so here's one Dad hastily took on NYD to try and crop out Tom's 'Allam Out' poster, when there was a light on but no one home. 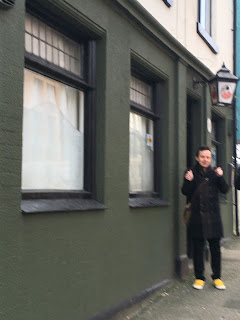 I decided to take an immediate 'right' turn rather than go straight on when I got inside Fagans (1709 / 2926) which as it turned out, was the 'alternative' course of entry and I ended up in the tiniest but most perfectly formed pub room.  A nervous student looked up from his stout and gurgled 'hello' and the erstwhile landlady looked at me expectantly.  There really wasn't room for many more than two people in here without being squashed, so glad no one else tried to join us!  I'd read in both the current GBG and one from about 10 years ago that Tetleys and Abbeydale Moonshine are the two ales, which I thought was kind of great, but with no view of the pumpclips, I felt it best to ask.  When she told me, I felt there was a bit of a defensive tone in her voice, so I wondered if CAMRA tossers come in, sneer at this limited range and walk back out?!  Surely not, sad if they do.  She was nice though, as was the jovial Mr Fagan, telling me not to lean on the bar cos pint glasses would spring back up at me, like a dog or something?  Crazy.  Mrs F told a joke about Dracula ordering from JustEat, and a trip to the loo showed me that the main bar room was just as great as the small snug.  I've been to so many Sheffield pubs, many classics, but this for a first time visit, well I'd rank it in my top 10 for sure, apt as was chatting on Twitter to TwoBeerGeeks who did just that, and it sounds like my (albeit limited) views on Sheff pubs match theirs, so that's reassuring!   Great contrast between all three pubs tonight, kept it interesting and enjoyable. 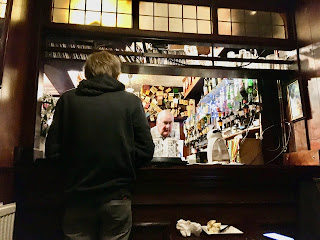 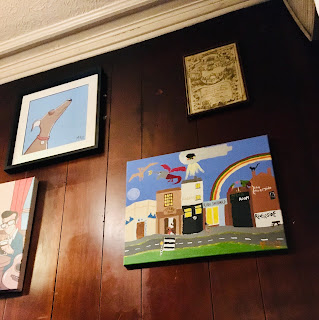 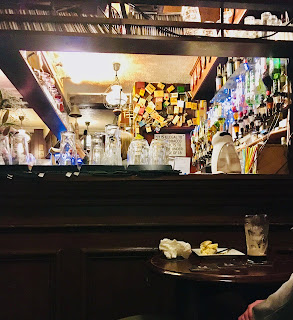 So a successful way to end January.  Feb was only a few hours away and I was determined to hit the ground running, probably literally with the day I had planned!   Join me for tales of that later this week, but I'll do a month end review first.  Betcha can't wait. 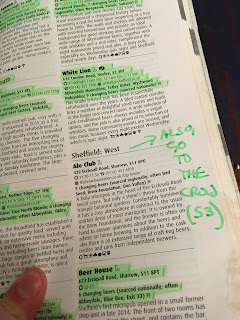