BRAPA in ..... ALL THE FUN OF THE SEASIDE IN BRIDLINGTON 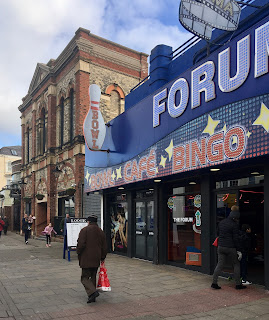 I was due at a very special 60th Birthday do in Barton-upon-Humber in the evening, so 1st Feb meant I couldn't exactly be too outlandish in my pub ticking quest, the likes of Ravenglass and Tanfield Lea on ice for now.

With Dad driving across to Hull to watch the mighty Tigers tackle Brentford (we'd sold our two best players the previous day, what could possibly go wrong?) I snuck in the back and got him to drop me off at Paragon Station and slip, slided away up the line to Bridlington.

Brid has a special place in my heart as my late Grandma Betty lived here, in flats above GBG regular, the Marine Bar #PubGran

So it surprised me that this year I had two new entries to tick off in the town, and also what a big sprawling place it actually is, the two pubs half an hour apart ....... 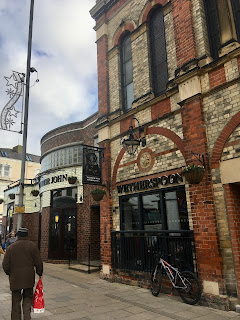 And Grandma also used to get taxis to and from Prior John (1710 / 2927) , a Wetherspoons that has had new life breathed into it (the first new life breathed in Bridlington since the 1960's) following a  refurb which has given it a cheery, light and clean feel, but also had a fire rumbling away at the end of the pub where I sat which must be something of a 'Spoons rarity.  I knew I'd mess up ordering a beer called "She Sells Sea Shells" so I think I talked myself into it.  A grumpy oldster alongside me wasn't laughing, especially as he went off for his coffee refill only for the barman to forget to tell him that particular machine was broken.  "We'll have to call you Arthur instead of Alan, as in arthur (half a) job!" chirped the chirpy bleached barmaid, channelling her inner cockatoo.  Poor Alan looked thoroughly beaten down.  I was just relaxing into my excellent Gadds' (not Gary Glitter) when a sinister blackcurrant squash wielding shadow appeared at my shoulder.  Tom Irvin.  "I thought you were still in Hull!" I croaked through a mouthful of Kentish bitter.  "But why wouldn't I have got into Bridlington early to ride the local buses?" was Tom's reply, and quite frankly, I had no riposte.  Turned out to be useful as it was only now I'd noticed the other 'required tick' was a 30 minute walk.  Tom had a bus solution, and after he declared all the staff 'stupid' (can't remember why), I pissed atop the spiral staircase and we set off for the 'bus station'. 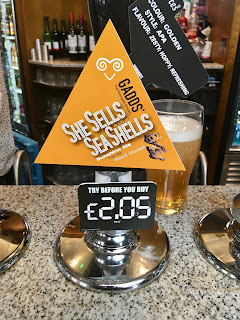 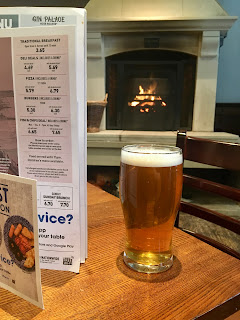 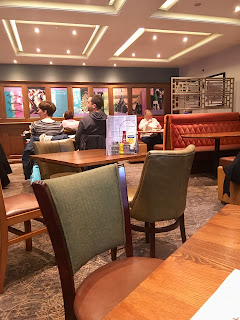 Tom's bus plan worked perfectly, and it took all the pressure out of what would've otherwise been a very rushed 25 minutes in the next pub.  Glad we didn't have to, as it was worth savouring. 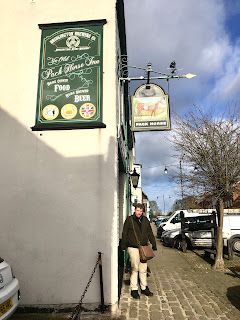 Yes, Bridlington actually wowed me last time out when it pulled the Board Inn out of it's unlikely magic hat, and whilst the Pack Horse (1711 / 2928) didn't quite have my jaw hitting the floor at the same rate of knots, it had a dark, calmness to remind us we were in the Old Town part of Brid.  It could've perhaps been a foody pub, but the pizzas are only available in the week, so 'twas just Tom, myself and two portly old boys playing pool, amusing as they were very relaxed about foul shots, like when cue ball got lost in a beer belly, it was just 'carry on like it never happened'.  I bet Bill Werbenuik would've appreciated it, but then he probably liked most pubs!  Like so many East Yorkshire (no, NOT Humberside you heathens!) pubs, it had a Marston's flavour, not always the loveliest of flavours, but enjoyed my Hobgoblin Gold muchly, before we dashed off for a predictably delayed bus in the chilly east coast breeze. 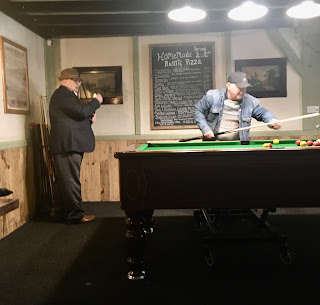 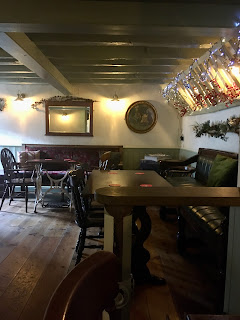 It was time to start working our way back down the train line towards Hull, where I was due to meet Dad before 3pm (our match had been a lunchtime kick off) and sadly, there just wasn't quite time to do both the Driffield AND Cottingham new pub ticks so we opted for Driff because Cott is near enough to 'Ull to make it potential do-able if I ever come to a Hull City home game.

Walking through Driffield in direction of today's second Wetherspoons, Tom noted the Iceland still had the 1990's frontage, retro!  Sadly, that had him surveying neighbouring shops, one of which was Boyes.

"I LIKE BOYES!" exclaimed Tom rather too loudly on the bustling main street, even worse when you can't hear the silent 'e'.  With the local authorities about to swoop down on him, I managed to smuggle him into the 'Spoons just in time. 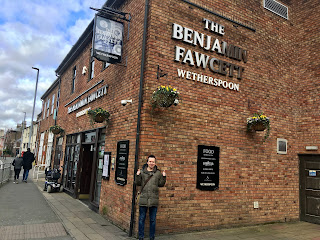 I don't think the Benjamin Fawcett, Driffield (1712 / 2929) was anywhere a near as good a 'Spoons as the Prior John.  A quite drab atmosphere, a higgledy-piggledy clutter of chairs blocking the entire floor space made navigating your way around the pub difficult, and the customers generally miserable as sin.  That was with the exception of our new friend at the bar, a kind of sturdy Scott Major (Lucas Fitzgerald in Neighbours, if that makes it any less obscure for you.  It won't!) in a bright green tee shirt who complained to us how cold it was in here.  Errr, trying putting a jumper on mate?  I didn't say that, a Tom had been temporarily distracted by a milkmaid (barmaid moving milk into the pub kitchens, can I call her that?  Probably not) , even offering to help her.  Perhaps he was trying to shake off the 'Boyes' comment so it didn't feature in this blog, it didn't work in any case.  'Close your eyes and think of Newton Solney' I told myself, as I supped my Burton Bridge ale, but try as I might, it was hard to forget I was in a bang average Driffield 'Spoons.  You could say it was 'Farrah' away not the best Fawcett.  Sorry.


Time to get ourselves back to Hull.  Had Hull City easily brushed off the sale of their two best players and demolished Brentford?  How would subbing off Tom for Father BRAPA fare?  Could I get a bonus pub tick in Barton during the evening party?  And what of the BRAPA mystery guest debutant?  Find out the answer to all of these in part two tomorrow.