A rare Sunday BRAPA outing last week was brought about by several factors.  My sickness and diarrhoea bug (which I don't like to talk about, but seems to have longevity!) had ruined my previous weekend, I'd done all my Sunday chores on the Friday, and with Lanzarote looming large, I need to get my quotas in where I can.

Still, I didn't book my Newcastle train ticket online until about 1pm, hot footed it to York station, from where I took the Metro to Whitley Bay and then a bus to Blyth, for a rare foray into Northumberland.  (I could've got a bus direct from Haymarket, but it was broad as it was long).

For once this month, it was a glorious sunny day despite a stiff, icy breeze.  This was my first glimpse of the Northumbrian coast that people wax lyrical about, even this far south, it looked beautiful in the low afternoon sun and I'm looking forward to delving deeper, with trips to the likes of Alnmouth, Seahouses, Holy Island and Everything-by-the-Bloody-Sea in the coming months.

It was a debut for me in Blyth of course, it did look rather 'Spartan' (haha, sorry) though the two minute walk from bus stop to Wetherspoons and back again probably means I'm not in a position to judge the town fully! 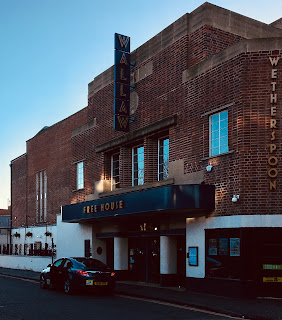 I was a bit confused on arrival as you enter into a sort of foyer, doors going off from every angle, the odd staircase, and an original rust bucket of an old projector as a centrepiece, to signify the former cinema use of Wallaw, Blyth (1735 / 2952). Luckily, I chose the correct door (always go left if in doubt, BRAPA rule) and saw the bar in the distance of the giant sprawling room.  I wasn't prepared for what followed.  Probably a result of the newly released £20 polymer, a crazy dude had various notes strewn across the bar and the barman was talking him through them.  "But why is the queen on the £20?"  he asks.  "She's on them all!" replies the barman, giving me a glance as if to say 'you see what I have to deal with on a daily basis?'  It then got more bizarre when the bloke replies "well .... well, why don't they put someone younger on like Princess Diana".  "BUT SHE'S DEAD!" squeaks the poor barman.  "Oh" replies the bloke and shuffles off.  Coming in from the left, a middle aged lady with one of those 'I want to speak to your manager' fringes.  "I'd ordered a double vodka and coke for table 74, but I'm convinced it has NO vodka in at all!" she says, passing it over.  Barman, patience personified, gives it a sniff, murmurs to a colleague who does the same.  "I can smell the vodka" they concur, and so could I, from where I was stood!  No wonder that, in all the mayhem, I couldn't find a 50p off 'Spoons voucher in my bag.  One of those experiences where I suspect they plant 'actors' in pubs for my benefit.  Dumbfounded, I plonked myself and my powerful Jurassic Coast bitter away from everywhere, and I supped it carefully in the midst of a Sunday afternoon gentle hubbub, wondering exactly what I'd just witnessed! 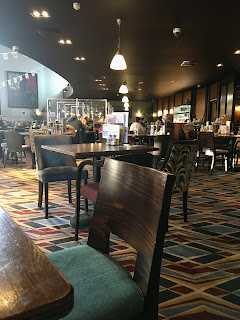 If Wallaw is one of the more modern Wetherspoons, then I think it is one of the nicer ones.  I feel that compared with some of the early examples in North London (New Crown in Southgate and Railway Bell in Barnet), new ones (I always think of the impossibly shite Hain Line in St Ives Cornwall) don't seem to have had as much care taken over the design etc.

Anyway, the Jurassic Ale wasn't the most neckable but neck it I did, and ran around the corner to where the bus was standing, ready to take me back down the line to Whitley Bay.

I hopped off next in a place called Seaton Sluice - I once met a friendly guy from there at 5am in L**ds after we'd both missed the last train home the previous day, and he had to be a best man at 3pm!

I crossed a road, walked across a grassy knoll, and the pub was standing alone, looking proudly North Eastern and welcoming with one of those blue stars that appears in the Newcastle night sky (like the one in Batman) if the football team are about to win a home game.  Hasn't been seen for a while. 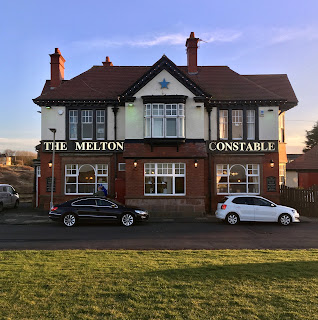 And the sense of 'good feeling' continued into the Melton Constable, Seaton Sluice (1736 / 2953), a pub that felt as though it had been designed with a lazy Sunday afternoon in mind.  Traditional bench seating, wood and glass partitions, good shag on the carpet, and a mixture of wary and welcoming glances from the grizzly blokes at the bar.  All the needed was for the 'human centipede' of lingering Sunday diners to fuck off, and the atmosphere would be perfect.  Fuck off they eventually did, but not without blocking the doorway to re-position their pashminas, scarves and snoods for eternity.  Impatient locals wanting to get out at the same time decided to use the rear exit.  The young barman impressed me also, one of nature's 'great communicators'.  You may think this quality is a pre-requisite of working behind a bar.  Alas, you'd be surprised how many are uncommunicative lumps of misery and silent hatred exist up and down the British Isles.  When he told me to enjoy my drink, it sounded like he meant it.  The perfect seat opened up for me, at 9 o'clock from the bar, enclosed to an extent but within earshot of the regulars, and with a clear run to the bogs.  Perfect BRAPA positioning can 'complete' a pub experience. An old gent appears at my side to hang his coat on a hook, nodding 'alreet' at me.  Proper pub.  The Tyneside Broon went down a treat, another barman told everyone he wasn't going to go to anymore Newcastle Utd games until 'things changed'.  Everyone just said 'HA' and I realised it was time I got a shuffle on.


With the sun rapidly coming down over the south Northumbrian coast, I crossed the road and walked along down to the next pub, which was less than a mile's walk - and the fresh air and exercise did me good, even if I did feel like I could be blown into the sea at any moment, oh well, at least I'd have gone out happy!

Our next pub was listed under the location of 'Old Hartley' in the GBG, and this was all I could think of ..... 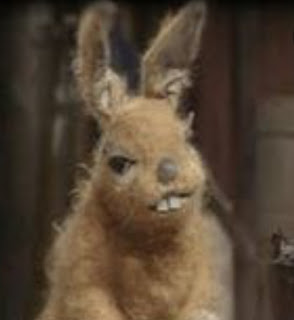 
It seemed impossible to believe that Delaval Arms, Old Hartley (1737 / 2954) wasn't a hotel, or residential in some respect, it just felt so much like some of those hotel bars I've visited in Cumbria, West Dorset and the Isle of Man in recent years, but the GBG doesn't have the 'bed' symbol so there we go (even if the 2020 GBG seems to contain more inaccuracies than any Guide since the ill-fated 1999 edition).  I walked around to the back right of the building, opened a frosted door (yum) where a long narrow room contained much doggage, happy old walkers, and a smiling barmaid.  Like the barman in the Melton Constable, she stood out as 'above average', frequently glancing smiles at me in that sympathetic 'I hope you are ok being the only loner in the pub'.  I smiled back reassuringly in a 'I'm used to it, but if it was 29th Feb, I'd be asking you to marry me right about now' kind of way.   1748 this pub is from, and Grade II listed, and it did have a nice atmosphere as with the dusk outside came the rain, reminding me just how out on a limb you are on this coastline.  Not sure playing 'Coldplay' has ever really enhanced a pub atmosphere, but it says a lot for the Deleval that it didn't ruin it like it would in North Bucks.  The long thin dogs stretched themselves over the limited floorspace towards me, but even then, I couldn't summon the energy to feel anything but love for this pub, this ale was good stuff, zzzzz.  Hang on, I've got a bus to catch, wake up Si!


Much to my relief, the bus chugged up only a couple of minutes late, and soon I was unceremoniously dumped in Whitley Bay town centre, like the last passenger of the day which I probably was.

It was pitch black now, and with the wind and rain whipping up a storm around my lugholes, you could say the next (and final) pub was apt ....... 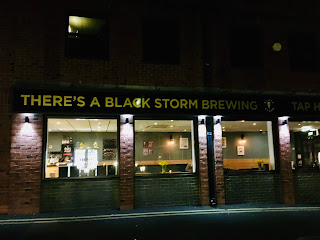 I never take heating for granted on entering a micropub, brewery tappy thing, or similar ('bottle shop and tasting room' in this case, says the GBG) , so was delighted to feel the immediate transition to warmth at the Storm Cellar (Tap House), Whitley Bay (1738 / 2955).  The beer serving solutions expert (I'm not sure that was her official title) seemed very motivated, friendly, even offering me a loyalty card which I took with good grace though offering me a pub loyalty card is the equivalent of a TV Quiz show hosted by Armstrong & Osman i.e. Pointless.  I ordered one of their porters with my usually lazy spiel about being 'much needed on a night like this blah blah' and I must say, it was absolutely superb!  One of the best beers I've had all year.  If I could understand my tastebuds and gave enough of a shit, I'd described the malty chocolately coffee-ee overtones and biscuity viscosity, astringent arrangement, like a string quartet playing Beethoven inside my mouth, but I know you don't read my blog for that type of thing.  It warmed the cockles anywho.  A few other customers arrived, good.  Three young lads seemed canny but discussed pentagrams for the most part, or a few seconds at least.  I'd already noted our loyalty card givers lack of North East accent.  So no surprise when she bonded with another bloke cos they were both from Somerset.  "I'm only 30 and I live 20 minutes from Bath" she says, I wondered if there were maths to be done there.  They then both spoke of how they missed the south, finding it a bit of a one horse town up here.  "Croydon gets a bad press, but I love it!" one of them said, switching their attentions to the south east.  "Yeh, but fracking is dangerous" said someone else, I couldn't keep up!  "It sounds weird but I actually like sirens blaring at 3am!".  Errrm, yes it does sound weird.  And I had a Metro train to catch.


As tempting as it was to jump off the Metro at Tynemouth or Wallsend for required ticks, I knew I had an early start of Monday, so I grabbed a coffee, juice, and got myself back to York as quickly as I could.

I'd be back up here the following Friday, which I'll tell you all about in the coming days, though I might do my month end review first!

Thanks for reading as always, Si