BRAPA - Hebden, Brig and Tod Too (Doing the Hard Yards in West Yorks) 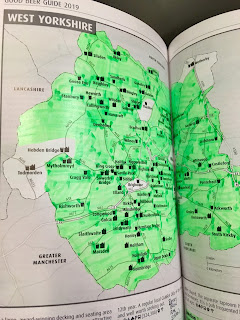 In Good Beer Guide ticking life-cycle terms, I remain a mere twild.  Snotty, snivelling and entitled, I sort of still expect every pub outing to be brilliant, and failing that, at least mildly amusing.  After all, I still haven't been to so many of the 'classics'.  The Nursery in Heaton Norris, the Tandle Hill Tavern, Bag O' Nails in Bristol, Owd Nell's Canalside Tavern in Bilsborrow.  The stuff of legends.  Errrm, the Maidenhead Conservative Club.  I've still never ticked a pub in Slough for heaven's sake!

But for my longer in the tooth (I'm not calling them old, kind of) contemporaries, the yearly process of 'mopping up the new entries in counties they have completed several times over' must sometimes feel like a chore.  All the classics are gone.  You are left with a dangerous combination of new micropubs, improving Wetherspoons, dining holes with pretty staff selling good beer and pubs that have been open so bloody long, the local TWAMRA committee have finally cracked and given them a one-off place in the Guide based on length of service.  A sympathy vote if you will.

For me, it is only on these icy winter evenings as I complete West Yorkshire for the third time that I get a glimpse of the flip side of  that glamorous life of the pub ticker!  If I thought the new entries at Ackworth and Alverthorpe had been dull a few weeks back, I was in for more of the same tonight.  Even the journey was boring, the highlight when a stripey dude pulled a can of Camden Hells out of his sock at Halifax ..... 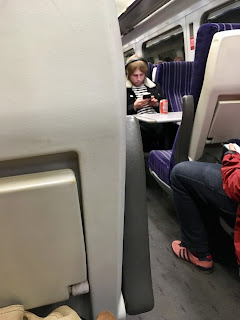 Todmorden is a place which has filled me joy over the years.  Some of the friendliest folk you could hope to meet in the street, a UFO abduction at Eagles Crag, the wonderful Staff of Life staff, Sunday arvo karaoke in a pub called the Polished Knob, something called Barearts, and plenty more.

But it was in mean, miserly mood tonight as soon as I stepped off the train, straddling the Yorkshire / Lancashire border hungrily like Rose West on one of her West Indian gentlemen.  Our first pub was called The Pub, surely nothing good can come of calling your pub The Pub ....... 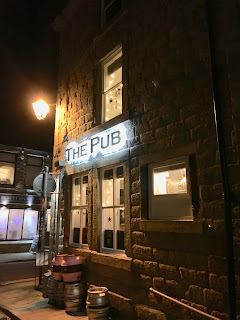 Actually, I was expecting great things having recently read two reviews from local pub legend Chris Dyson and also that cheerful bloke from the Fens who likes Bass (not Ian Huntly).  I walked in to a rather chilly scene, it smelt like a summer beer festival in a tent - that heady mix of stale ale, old man arse crack and soil.  Everyone was munching on crisps, and the sound of that many people munching on crisps in a confined space in stereo is quite irritating.  Luckily I spied my 'beer of the moment', that chocolate milkshake mild I got in Vintage in Hull recently, it was amazing again.  I perched on a side seat by the bar, a lady with a bad knee she didn't like to talk about  that had seized up in the cold briefly smiled (bad knee unity!) but the scene was dominated by three locals chatting with the barmaid, all quite insular and League of Gentleman.  I kept smiling and blinking around the room, even put my GBG on the table, but nothing doing, and throughout, I felt like I was in a waiting room about to be taken through to view the corpse of a dead loved one.  One of the blokes drank three thirds, another revealed how he accepted his wife's marriage proposal because "I thought, well you ARE really nice", talked about his hand lump,  and another one revealed Tiki Fire Gin and Lemsips are a good cure for the common cold.  The humour was stilted, a bit like an episode of Friends, you could smile to yourself but it all felt a bit forced.  I'm sure there's a 'micropub banter' script that Hiller flogs to them all for a fiver and a glass of Whitstable Bay.  As the blokes left, three old men who'd been on a hike came in and they seemed lovely chaps, so perhaps I just caught it at the wrong time.  I lingered for barmaid to finish serving nice bad knee lady so I could say thanks for a great pint on the way out, but even then, barely a nice goodbye either!  I've now been to two pubs called Pub, and disliked both equally! 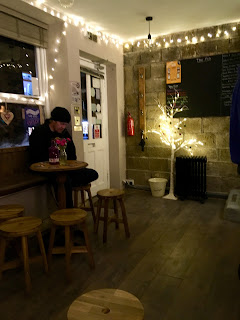 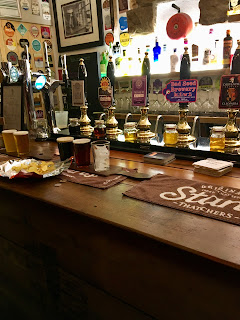 But if I felt a bit guilty about slagging off a town I'd previously had nothing but love for, at least I was consoled to see there was a Twitter account called 'Todmorden is Shit' on my side: 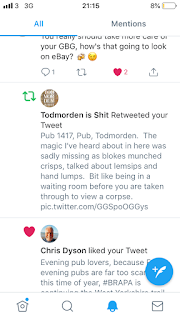 Next up was Hebden Bridge, and unlike Tod, not a town I've had any problems disliking over the years, pushing the locals to the edge of town to drink Buckfast and do heroin whilst art students, ghosts, patchwork quilt enthusiasts and vegans take over.

Pub-wise, the GBG always gives you something new to go at and whilst I quite enjoyed Calan's micropub the other year, Old Gate was a little bit crummy.  And it was across the road from the latter where I found this year's debutant, and there was a question mark hanging over it before I even entered! 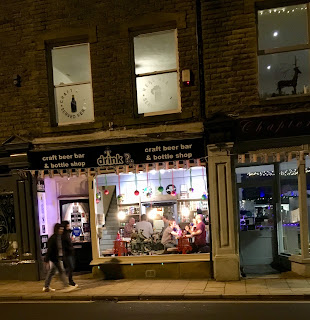 I said the same last year about pubs with a capital letter halfway through their name, and I'll say it here, no pub needs a question mark.  It looks pretentious, it screams of uncertainty too.  It should be Drink! Drink! Drink! if anything with a nice picture of Father Jack on the pub sign.  Drink? makes you think 'doesn't really matter if I don't bother'.  Imagine your favourite pub with a ? on the end.  I bet it makes it 5% more rubbish doesn't it?  Yet, to confound me, I entered to a table of check shirted 30 somethings welcoming me in!   So bewildered I was, I went through to the bar where a lady was saying to the barmaid "can I get this on tick, you know I'm good for it?" like she thought she was Jack Ford in When the Boat Comes In.   Not what I'd expected.   The place itself wasn't too cosy, my coat didn't come off for a second pub in a row, though my gloves were at least removed here unlike in Tod.  It was a bottle shop in truth, baskets full of cans and bottles reminded me of those heady summer days when me and Martin Taylor went to Willingham.  A bloke called Dario appeared, (not Dario Gradi) he seemed to be known to all.  There was a secluded warmer upstairs area but with no folk on it, no good to BRAPA really!  Just as I was relaxing and thinking "this isn't too bad I s'pose" a bloke didn't close the front door properly and one of the bearded blokes from earlier span round and shouts at me "YOU BORN IN A BARN OR SOMETHING??"  Well, it wasn't even me.  I could've cried, I suspect Streatham had turned me into what we call a 'snowflake'.  Two blokes admired each others Andrea Pirlo shirts, surely an in-joke and not a coincidence but still a bit weird.   Then a young lady got incensed when her friends suggested the first single she bought wasn't Killing me Softly by the Fugees "It was even on a cassette tape so there,  waaaaah!" she concluded.


Back into the freezing night air, and a bit of a painful long wait for the next train towards L**ds, so I sat in the waiting room and munch crisps loudly a la The Pub to upset an old lady trying to keep warm.

The great news was that this train stopped at Brighouse, where I had a new tick to do.  Three in one night would be a consolation for the poor standard of pub.

Over four years since my one other visit to the town, where I quite enjoyed both the Red Rooster and the Richard Oastler 'Spoons.  Luckily, it was a short walk to tonight's effort ...... 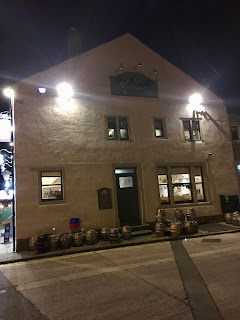 There were two ways that this place could've been excellent.  It could've been full of clones of my work friend Joanna Miller, or it could've been Rotherham Utd themed with old blokes in string vests clutching hand me down toothbrushes swilling six packs of Stones at the bar.  But there was to be nothing of this level of amusement.  It somehow managed to out-bland the previous two places tonight with it's bare boarded dining feel, felt like being in South Bucks and I can't be any harsher than that.  Quite a large place, very much empty with all the folk concentrated around the bar area.  Luckily, two identikit barmen were on the ball and saw me from over top of a crowd of people to serve me.  I only saw one of them first, so when his colleague asked if I'd been served 5 seconds later, I thought it was the first guy with severe short term memory loss!  In fact, one was bearded and one wasn't but I didn't notice this at the time.  On the plus side, the pub was warm and I sat at a distant table and was finally able to remove jacket and gloves!  A barmaid came out and gave a back massage to one of the blokes, and a local lady said "you alright there?" which was the nicest thing anyone said to me all night.  I nearly cried again.  A young woman who seemed to be drinking outside to avoid the crush (possibly had read Garden Hermit's suggestion on my blog for Christmas time pub drinking) had a rather spectacular penguin top on so I nodded at her, but a touchy feelie Dad with an air of the guy who played Brian Clough in Damned Utd stroked and kissed his son from behind.  The food menu looked good, the real Joanna Miller (not one of her imaginary clones) tells me there is a restaurant upstairs which is rather good, but we'll just have to take her word for it. 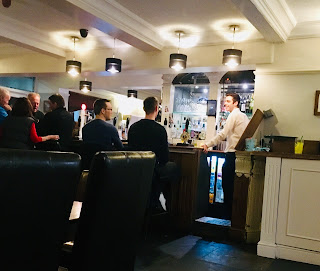 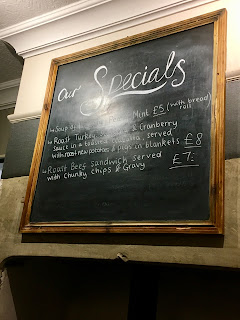 To pass time on the boring journey back to York via L**ds, I started a new career of New Star Soccer and the club I got offered to play for were Bradford Park Avenue, who came up like this ......


So there we go, three more ticks is about the best you can say after that mini-shambles.  5 left, the plan to finish them before the end of Jan is still on, though I doubt I'll get one in next week cos am out Tue, Wed and Thu, need Mon to recover from weekend, and "Mad Friday" is a day I'd encourage anyone who loves the Great British Pub to stay the hell away from them!