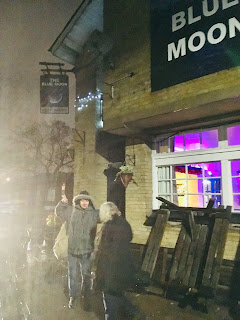 Halfway through Saturday then and I was already sobering up in the Taylor Lounge (not a micropub) with a good strong cuppa, reflecting that this cosy spot is very much the drunk tank of the Fens.  As Canadian(?) 70's Christmas tunes soothed me even more, and awesome teenagers ran around slamming doors, listening to sk8 rock and making vague promises about trying hard in mock exams, it was soon time to get back on t'track towards Cambridge proper where I had pubs aplenty to do.  Yes, I'd almost forgotten I was on a BRAPA day, you know, that thing where I tick pubs and judge everything!

Christine 'Mrs RM' Taylor joined us for what would be her official BRAPA debut (she came to the Sun in Waterbeach when I did it, but it was only a pre-emptive then so didn't really count as there was nothing to highlight in a book).  She may soon have been regretting her decision as the icy rain and gusty winds lashed into our faces as we boarded the busy Waterbeach Express (a bit like the Polar Express but colder and more full of idiots).  A quick check of the Hull City score, 2-0 up after 29 mins, whatttt??  I blurted out the great news to CT but she looked un-enthused as most people are when I talk Hull City.

The walk to the first pub wasn't far, but just as painful, I couldn't hold my hood up and my hands were blocks of ice.  Of course, the pub had to be at the bottom of an unlikely cul-de-sac and poor Martin was dying for a pee so sped off around the corner like a man possessed.  The little complex this bar was in was like the kind of place your fave gypsies keep the tastiest chickens .......

You had to slide the door to get into this oh so basic little bar (door handles are sooooo 2017), it felt a bit like going into a shed and there were so many lurkers, it was hard to tell who was drinking and who was simply sheltering.  The bar, if you can call it that, was right there, and Martin being the expert told us what to drink.  "It might be card only" whispered Martin, and there were four of them all lined up looking like desperate Whitechapel wenches vying for position hoping you'd insert your Goldcard into their slot.  In all the mayhem,  it almost passed me by how much the drinkers in here were caricatures of 2018 Brewery Tap regulars.  "Uh oh, my 'zine is out on the same day is yours!" said a young lady to the beardo serving me.  "How much is yours, mine will be £1.25?" he replied.  "Ouch!  Mine is £3.50" she replied, before adding that it came as part of a meal deal or something insanely quirky befitting the persona she'd created for herself.  What were these 'zines?  What are they about?  I'd love to have known, but this wasn't the type of place were any old randomer could engage the cool kids in convo.  We sat down towards the back on these benches and Christine said what I was thinking, this is somehow a nice place to have a drink in.  I don't know how, when you look at it from afar, but it really works!  It was cosy, happy, the beer was fantastic btw, and as Martin says, how often when they brew their own stuff at places like this it is dire, but the porter was cracking.  Might sound silly but it was almost so pretentious, it had gone the full 360 degrees and totally lacked any pretension.  Owl on the glass too, bonus point, and when I queried whether this was the pub on the front of the GBG, a member of staff jumped in and gave us a potted history about the building that absolutely no one had asked for, but was still appreciated.  And then came the highlight of the day (excuse the pun) as Christine highlighted the GBG and declared 'green' as the superior highlighting colour!  Hurrah.  It then all turned into the famous Eastenders Christmas Special of 1986 as Martin almost word for word quoted Dirty Den.  "This, my sweet, is a letter from my solicitor telling you that your husband has filed a petition for divorce." 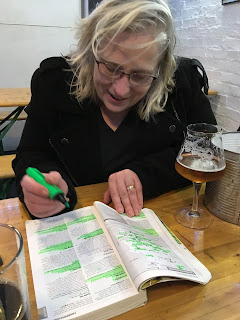 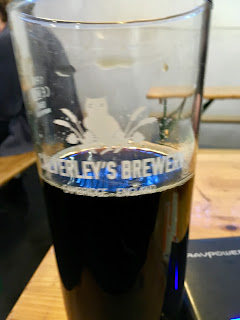 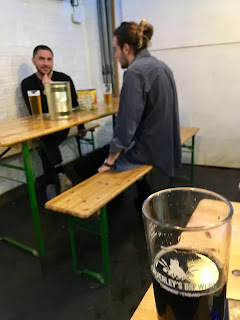 The weather wasn't letting up and the fabled pizza van which sits outside when the weather is better than this offering amazing pizza to all was nowhere in sight.  Martin thought it might be nice to 'break our journey' to the next BRAPA tick with a visit to an old fave ..... so we did.

Yes, The Cambridge Blue.  I picked this out as a pre-match Hull City pub on 7th Aug 2002.  Me and Dad liked it so much, we returned 25th Aug 2003.  The modern day BRAPA is horrified at such a revisit, but I was young and naive then.  An old lady said I had to tell her how to pull real ale cos she wasn't an expert, we sat outside, it said 'don't smoke near the rabbits', 'don't feed the animals with apples falling from the tree' and I had a cracking plate of liver n mash.  Oh and Hull City won both games.

So this was my first visit and over 15 years and wow, what a pub!  Felt a lot nicer inside these days, the crummy conservatory was gone and airy feel vanished, better beers and all round a very enjoyable pint.  And the news coming through Hull City had won, a lucky pub this too!

Back out into the harsh conditions and soon we were at 5pm opener, hence why we were happy to hang about a bit, the Blue Moon .....

What with the neon lights and banging music, my first instinct was 'bloody 'ell, turn it down a notch' but then I realised there was a live gig on, and the band list in the loo confirmed they'd been open all afternoon so we really could've come here sooner, not that I'd want to have missed the superior 'Blue'.   Well, 'Salamander' (unless it was Watford themed metal band 'For the Hornets' but the guy just didn't look Elton John enough) were giving it their all but it looked like you had to pay to get into a separate section so we didn't really try.   Somewhat annoyingly for me, the beers all seemed to be from Brew York, probably one of those Twap Twakeovers the beer bods so love.  Christine of course, put us to shame and showed how it should be done with the 8.7% Don Peregrine whilst I no doubt got tiddly on the 2.5% Debaser.  Not a huge fan of Brew York but certainly seemed great ales today.   We sat at these low black leather settees, I kept sticking to it, but only in a good way and no one else did anything interesting. 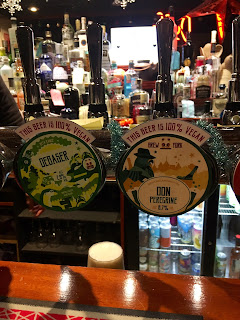 Still time on the clock so Martin's next move for us was even better than the Cambridge Blue bonus as we got a great pre-emptive tick in called the Alexandra Arms.   Well listen up Cambridge TWAMRA, you need to get this pub in the 2019 GBG.  The Oakham Citra was absolutely fabulous quality.  Pint of the Day.  And how often can you say that on your 7th pint of the day when your palette is shot to smithereens?  Very rarely I'd say.  Nice cosy pub, friendly, perhaps lacking a tiny bit of character of some of the others but as people like to remind me, it IS a beer guide, and if I think of some of the bang average Cambridge pints I've had in the summer in the likes of Geldart, Haymakers and Flying Pig (though the latter was better), I'd get it in the reckoning.  Oh, and to prove how amazing Martin & Christine are, they got two lots of burger and chips and cut it three ways so I could share.  So comfy, nearly missed train and had to run, they ran with me, Martin got me ticket and apparently was shouting "SIMON, SIMON" in the centre of the station but I'd already legged it to just make the connection to Peterborough.

Phew, a crazy end to a wonderful day, great hospitality, and now only NINE Cambs pubs to do, 5 in Jan and the other 4 sporadically when I get the chance!  And then I can get focused on Cumbria and Derbyshire.