BRAPA - Driving Homerton for Christmas / Wanstead Beyond (Part 2 of 2)

Alas, it was more 'smells of rear' than 'sounds of Chris Rea' as I yanked the door open to the huge well established Wetherspoons, which felt rather grubby, on Tuesday afternoon last week.  I'd already seen a bloke sat in the floor outside, scribbling in a notepad, hood up, flask of weak lemon drink in bag.  With the pub directly opposite the station, I wondered if this was some elaborate trainspotter who liked having a back rest.  There are so many London 'Spoons in the GBG, I always feel it is a good idea to get at least one ticked off on each visit, two if you are feeling brave.  Unless you designate yourself a 'Spoons day and do six, and whilst I don't dislike the chain as much as say, Tristan Fortescue-Smyth, I'm not about the organise a day like that!  As a smiley barmaid served me a vanilla cream festive ale which just tasted like a pint of smooth, a bloke next to me patted his beergut and exclaimed "it all goes here by the time you turn 40 .... my wife let herself go, so why should I bother anymore?"  MERRY CHRISTMAS!  The bloke he was telling shuffled off in the other direction, I did the same, to a raise area which smelt suspiciously of wee and stewed veg.  Tempting to try and make a connection between this and the pensioners Christmas dinner happening in the main floor space, but it smelt stronger in the area where I was sat (no it wasn't me!)  A new mousy barmaid was being shown the ropes by a scary giant one,  but I couldn't see much due to Xmas decorations blocking my view.  There was a demonic old chair, one of those I think you get pregnant in just by sitting in it.  There's one in Nottingham, and Scunthorpe I believe.  Still, I guess for post-dinner entertainment for the oldies, it beat the usual charades. 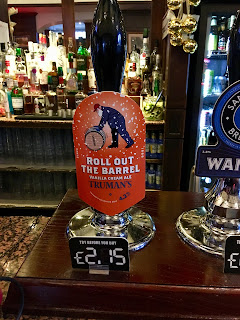 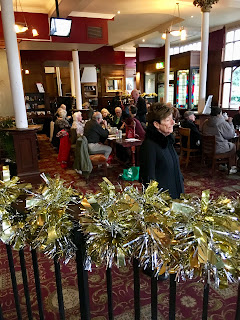 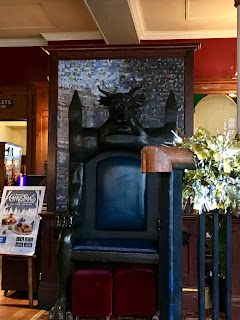 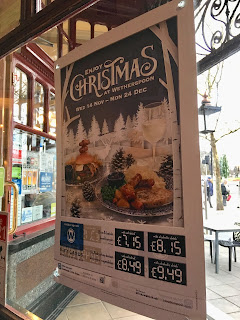 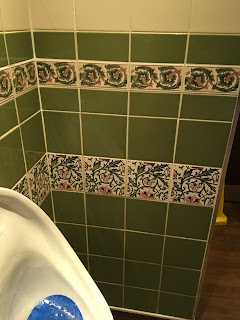 Time now for one of the harder remaining East London ticks.  In fact if you extrapolate London pub ticking into Cumbrian terms, this was very much Near Sawrey.  Not sure I did it very sensibly either, going on this long winded bit of the Central Line which took me past fictional places like Chigwell and Grange Hill, when I'd probably have been better going back one stop to Leytonstone and straight up.

Woodford station was about a 15 minute walk from the pub, and it was dark and raining by now but on the plus side, there was a nice church and some green bits so I could have a pee in the bushes, a rarity for London and a sign how Essexy it was all getting. 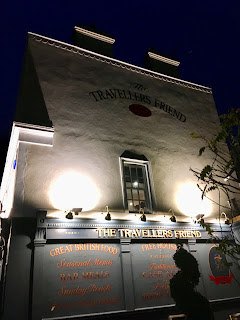 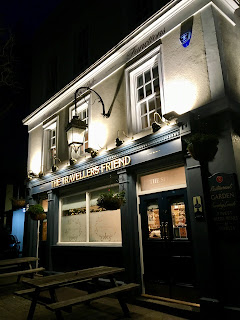 The weakest pub of the night, and the week, this pub managed to offer a 'worst of all worlds' in trying to make the classic pub faux pas of 'catering for all'.  All a bit galling when you rarely have to work so hard for a London pub tick!  Loud local nobheads to the left had voices which echoed around the soulless building, the barmaid of advancing years was a real Columbo, acted all dithery but was probably the most switched on person in the whole pub. I ordered a pint of 'Spiv' cos I wanted to say the word, and it was exactly the reason why people sneer at London beer - tepid, half dead, increasingly cloudy, shite glass, it tasted of sweaty socks and self righteousness.  A dog which I named 'Frazier Campbell' slurped it's way through a huge bowl of water, and then its jolly owner with sight difficulties demanded it had more, and it got better service than any human.  Greedy bastard!  I sat towards the back of the pub, where I series of non smiling staff appeared through a back door.  The pub smelt either of a really underdone pastry, or play doh.  I tried to see what a couple were eating just near me, but accidentally made eye contact so smiled weakly, strangely hearing the voice of Martin Taylor in my head telling me off for watching people eat.  This pub had a strange effect on me!

I battled my way back across Woodford for the Tube station, and changed at Stratford for Homerton where my remaining two ticks of the night were, and my last on page 290 of the GBG if you have your Beer Guide and highlighter pen ready, and are ticking this interactively with me - a fun game for all the family! 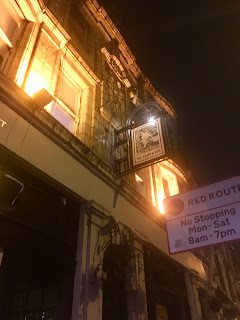 Well would you Adam n Eve it?  My pub of the day was this one, a really grand interior and all dark and smokey within.  Very young and trendy, busy for a wet Tuesday evening, but experience tells me that often leaves room for welcoming staff and good ale, and that's what I found here thanks to afro-dude (who even asked me if I was having a good day and seemed to mean it!) and Five Points, their ales never seem to let me down.   Because I'm secretly young and awesome, I joined some Christmassy beards and Twumpers in this raised area, but a young lady arrived, somehow wedged herself in behind me, and when her friend arrived with the most giant rucksack known to man, or woman (it put the BRAPA bag to shame), there was much seat rearranging and awkward stilted apologies and suddenly I was pinned between seat and railings.  I think one of the barmaids tried to respond to my S.O.S. , as she passed a tealight through the railings.  Errrm, extra atmosphere isn't really  what I need in this situation!  So I just accepted my fate and thought, if I die here, it isn't a bad way to go.  I did finally manage to prise my battered corpse from the depths, and went in search of my final pub of tonight. 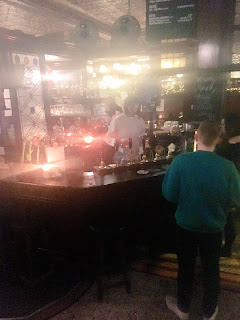 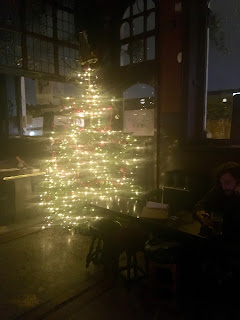 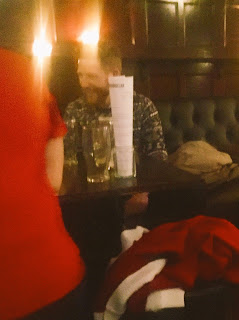 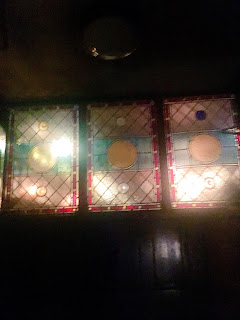 Just down the street, I arrived, but just as I squared up to take the outdoor photo, the battery on my phone went and this was to set the scene for a bit of an unlucky pub for BRAPA .......

Not that I'd have particularly enjoyed this pub even in prime circumstances, it was your classic London pub in many ways, had more of a North or Central vibe than an East one if I'm being honest.  It was heaving, took me a good while to get my pint of that sweet Milk Stout from Bristol, but I was in the mood for a dark one and couldn't see too clearly what else was on.  A quick reccy of the pub told be space was at a premium, somehow there was even twildlife playing amongst their mothers feet to the left, which seemed even wronger than usual in a busy evening pub situation.  So I edged back towards and perched on a radiator next to a long haired lover from Liverpool Street and tried to take what us pub blogging photo experts call an 'establishing shot' into the middle distance, nothing in particular, just a pub scene to capture the essence,  but too crowded with bodies (but not Boddies) so gave up.  But then LHLFLS tells me off, not cos he's on a moral crusade, just he's worried he'd be in it.  Told him I'd not taken even one (if I had have, he'd not've been in it anyway!), explained my blog, but he didn't believe me and demanded to see my recent photos.  When he'd satisfied himself I was being truthful, it was too awkward for him to remain and he left stage right with his remaining half pint, but did have the grace to say 'good luck with your blog' out of the corner of the bitterest side of his mouth, and I never saw him again.  Suddenly I had a seat!  Hurrah.  Okay, so Spaniards kept barging in to me and apologising, and a rubbish Milk Tray man vaulted in with a huge pizza for some ladies to my right.  If I stare longingly at it, will they offer me a slice?  I'd finished my snacks and was famished.  But then I heard that ghostly RM voice again "don't watch people whilst they are eating!"  And THEN, to top it off, I realised my train was at 19:27 and not 20:27.  Nooooo! A traumatic experience. 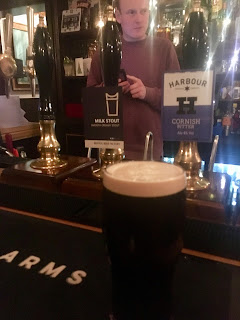 Probably won't get chance to tell you about Saturday's adventure until after Christmas so have a great one all, thanks for reading, oh and of course we've got the "BRAPA Year End Awards" coming up on NYE night so look out for that one, I promise to write it drunk.