If there is one day of the year I'd choose not to venture to the pub, a pub, or any pub, it is tonight.  "Mad Friday". Friday before Christmas.   So instead, I sit here with a nice cup of Earl Grey (tea, not a Bergamot IPA, I'm not a monster) and two fig rolls (I know how to live) trying to piece together last Tuesday in East London from a series of drunken scribbles and fuzzy hasty photos.

It all started gently enough, as I headed to Gidea Park from Kings Cross via Stratford.  As I swiped out at the station, a cat who I named Oyster, was perched, arse on card reader.  The two guards, who'd obviously not been on Twitter in 2018, were trying to assign it a gender. 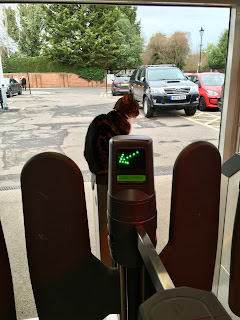 Well this gave me reason to smile, and a walk down a leafy suburban street past some cheerful old ditherers and signs like the below were giving me reason to believe that the micropub I was aiming for was going to be a great experience, full of well being: 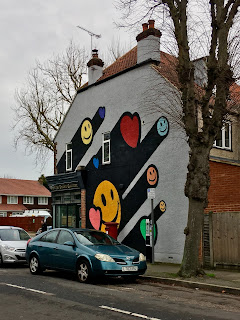 After all, I'd been to Gidea Park once before and visited the delightful Ship with Dad and Tom a couple of years ago.  Soon, I spied the pub just around the corner:

But my early sense of well being was shattered as the pub had recently changed opening hours to open later Monday-Wednesday.  Nooooooo!  How unlucky can you get? 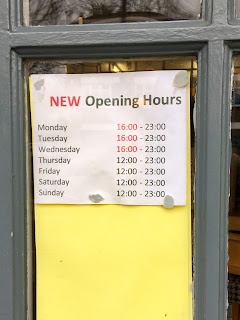 Nothing to do but take a deep breath and walk back to the station, where I passed the cat trotting behind an old bloke.  Had it been waiting for owner to return?  As it went into a different driveway to sniff around, the man shouted 'KEVIN'.  Kevin?  Not even Oyster?  Oh, my Gidea Park dreams were totally in tatters by now.

Much later in the day, the brilliantly always on the ball SE London CAMRA had seen this on Twitter and alerted the Gidea Park micropub to my misfortune, and I received such a nice reply and apology.  AND the bloke was called Trevor.  I know 3 Trevor's, all very likeable chaps.  And let's be honest, a schoolboy error on my part not to double check WhatPub which HAD been updated. 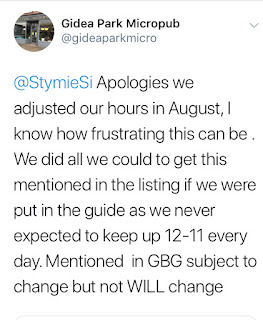 On the plus side, Ilford was only a few stops away where it had a fabled pub Martin Taylor had been telling me weird and wonderful things about. 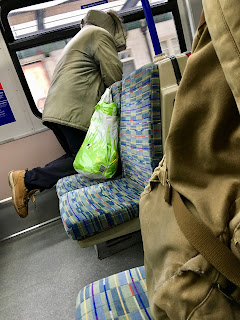 Despite the train being about 500 carriages long, a crazy bloke with a bad cough and a local radio station blaring out of a stereo came and sat right near me.  All the young ladies including Polish Sally Phillips and Romford Rebel Wilson got up and moved, leaving me alone with him.  Though I must admit, when 'It's the Most Wonderful Time of the Year' started playing from his stereo, his menace diminished somewhat.  He got off at Ilford, he'd have fitted in perfectly in the next pub.

And nothing to do with an iconic beer blogger of the same name I hear a lot about, Jono's was a delightfully dark and dingy boozer with a top atmosphere, nice dark wood, mirrors, tiles, that sort of thing.  Even on a Tuesday early afternoon, it was choked to the gills with cockney lager drinkers saying facking mappets so I hid at the end bar where the two beers, Castle Rock Harvest Pale & St Austell Tribute (now a seasonal guest in the most exciting ale change in here probably witnessed in centuries) were.  As if it display her barmaidly credentials and the no nonsense nature of the pub, she shouted across to me and a Fosters drinking German local, served us in conjunction, took money off us together, gave change together.   I was determined not to linger here so I could get back on track after a slow start to the day, but this was easily a place you could get settled, even if I was back to back with a very stern bulbous nose who went to the bar 3 times in the 27.5 minutes I was here!  All that could pacify the locals was piped Johnny Mathis doing 'When a Child is Born', though I must admit I can only hear the Amateur Transplants version of it* now!    Finally the day was up and running, and I headed back to the station, bound for Wanstead.

* "A baby boy, pops out caked in shit
And Mary screams, it feels like something split
The wise men come in, and confirm she's badly torn
That's what you get, when a child is born."

And I'll get part two of my blog to you, featuring Wanstead, Woodford Green and two Homerton pubs, hopefully by lunchtime on Sunday.  For now, to prepare for tomorrow's London return, where I'm doing two East London pubs and then 4 North London ones all being well.  But a bit scared cos on the Grand Central with Sunderland fans travelling to and from Pompey so that should be fun.

See you on Twitter tomorrow morning, or here on Sunday.  Happy weekend all!