We all want to be Chris Packham in the 'Cambs Pub Ticking / Really Wild Show' analogy, but I'm probably more Michaela Strachan, or dare I say it, Nicola Davies in truth.  Martin Taylor must be Terry Nutkins,  which I guess means Christine Taylor is actually Chris Packham.  You, dear reader, will have to be Steve Backshall, whether you like it or not.


It was a bitterly cold morning in Ely as I arrived just before 11am for the first of my remaining 14 pub ticks in the county.  'Bitter' isn't a word you see associated with real ale much any more cos it sounds like something old men drink, so I guess we should really call this weather 'Hop Forward' whatever that means.

It felt a far cry from my warm April visit when I ticked off two pubs, the Drayman's Son Micropub and the Prince Albert, but like all good towns, it had added something new to force my return.  The Cathedral was still standing: 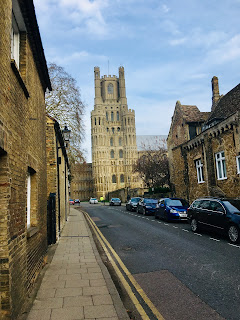 And I skirted around it and the main shopping drag to find our pub across the road:

Quite a spacious place, guess it did feel like a 'town house' in some ways if you ignore the terrible bookcase wallpaper, strange brickwork and totally unnecessary conservatory style back bit.  There was an ale on called 'Tundra' so I ordered that, trying to make a joke to the veteran barman about it being fitting in the climate.  He laughed mirthlessly, my comment deserved no better in truth.  He had a wrist support, possibly from too much pint pulling.  I learned Ely TWAMRA were due in town later for their annual xmas knees up, and from what I hear, they are a strange bunch who's calendar revolves around an obsession with their breakaway beer festival from the Cambridge one, the bloody renegades!  I sat in the front room, it felt a bit more 'pubby' with a degree or two more warmth, and a bar billiards table.  Martin Taylor arrived and ordered a coffee, which came in a clear glass, and looked more like bovril, or just gravy in truth but he nibbled those pointless little biscuits you get with such things, and we chatted about Brentford, Belgian Blue and other B themed things.   Not a bad starter pub, bit ordinary but eminently a nicer place to drink than the three I'd done on Wednesday! 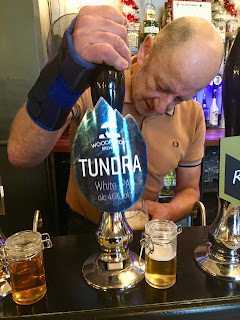 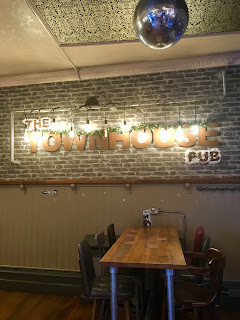 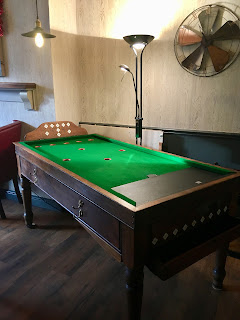 Like the chauffeur of the year he (probably) is, the Mart-Mobile was parked not far away and we sped off to Little Downham across flattest flat Fenland for a pub which had been shut on my previous visit here back in April, 3pm on a Saturday, possibly because the Sunderland supporting landlord was sulking about impending relegation, or so sources told me at the time.  All that was left to do was talk to a man from March with a horse, like you do.

The ancient inn sign was still creaking on its hinges in the wind, but this time, there was a light on and the curtains were only slightly drawn.  Message to pubs : You can run but you can't hide, BRAPA will track you down! 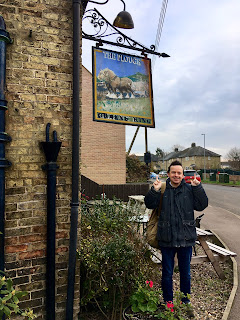 It wasn't my most graceful pub entrance, as the door split into two, the highest section separating first, the strong wind made all the pieces of paper on the noticeboard flutter, and they hit a bald bloke in the face.  I apologised but he told me I wasn't responsible for the weather, which was very decent of him considering he was the moody Mr Sunderland I'd been told about.  I was served Bath Gem by his Thai Bride, in a woolly hat (I'd been in warmer pubs, the fire struggling to get going) who then controlled a Thai child (not a twild really, he was a great lad) called Jayden(?) who despite his youthful years, was being taught how to pull pints by his Mum.  Very cute, "ahah, we start 'em young in 'ere" said the landlord, about the closest anyone got to properly engaging with me in here.  Otherwise, the locals were chatting about a trip to Sutton like it was on a different planet, and when I later learned there's actually a Cambs village called Sutton, it could've been seen as even more tragic.  The pub itself was as much of a gem as the beer I was drinking,  some nice stained glass and old features, gorgeous smell of rice, and I was told where the bogs were before even I'd really made up my mind I was looking for them in a great psychic ending to my time here. 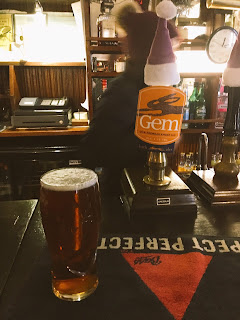 Martin had braved the cold and gone for a walk, having had several recce trips to the Plough this year, but he was more than up for pub three, in the village of Rampton.

First, we took a quick detour to one of the most mysterious pubs in the UK, the King's Head (just to peer in through the window), can't remember which village it is in but it doesn't feature on WhatPub, there's no record of it on the internet, yet it does exist and opens very occasionally, problem is, they never tell you when.  So imagine Martin's delight on seeing a sign in the window saying they are open next Friday evening!  The pub sign is even more ancient than the Plough in Little Downham, but looking in through the window, looks quite rubbish actually.

Rampton then, where Sebastian Faulks set the novel Engleby.  My Dad once compared me to Engleby, the bloke, but when my sister read it, she said that was quite harsh, even on me!

Now you know a pub is going to be shite when instead of having a picture of a Black Horse, they have the letters 'BH', AND you can see a man with a waistcoat in the window stuffing his face......

And the entrance woe theme continued.  A sign on the front door said 'use the side door', but when I pushed it, it was being weighted down by a fake old Scrumpy pump as the door doesn't close properly when it is windy.  That might be ok if you were in some ancient grade II listed heritage untouched jewel of centuries past, but when you are in bland purgatory, it is harder to accept.  Especially as the locals at the bar and their super judgey hound tried to make it we should've known that!  And what's more, where the eff were the ales?  This pub was seriously winding me up.  Through to the other room then when Mr Waistcoat and his overly privileged feeders stuffed scampi into their gobs like Jabba the Hut and his family, glaring up at me like "ugh, drinkers, how quaint!"  But on the plus side, the ale came straight from the barrel, wasn't Greene King, was top quality, and it was nice to see they separated drinkers in one room and diners in the other, even if you had to go into the dining area to properly see the ale but never mind!   A version of "Joy to the World" was STILL playing (must be the 20 minute extended version) as RM brought the pint and a half through on a tray like some German beer wench, and the door flew open a couple more times.  RM put my antagonism here down to fact I'd had three pints, probably right, and ordered me back to Waterbeach for a 3pm cup of tea sobering up session!


So back to Chez Taylor then before we resumed the pubbing in Cambridge with a BRAPA debutant, some abysmal weather, a pre-emptive, and a re-visit.  Join me tomorrow for tales of that one.