It was high tension as BRAPA crisis talks were held on Thursday when it soon became clear I'd only be able to do FOUR pubs on Saturday rather than the standard six.  Gulp!    Suddenly the pressure was on to maximise my Friday night in West Yorkshire, having admittedly had the added bonus of Hull on Tuesday.

And on Friday lunchtime, the 'greatest minds' in BRAPA strategy came together to put together a plan in L**ds Costa Coffee, to achieve three pubs rather than two, and by jove, we did it .....


I left work dead on 4pm and took that always traumatic 16:26 Skipton train as far as a weird place called Steeton & Silsden.

The journey was amusing when a man and woman bonded over being from the North East.  "I saw a woman tied to a tree and sprayed with a hosepipe in Whitburn" said the woman, a recent breast cancer survivor, with a haunted hosepipe look in her eyes.

"Aye, they (Sunderland presumably) don't deserve to be two divisions down even if I am a Newcastle supporter .... I like all the teams up there!" replied the bloke in a very un-Geordie comment, like he'd only half been aware of the conversation he was supposed to be part of.

Of course, the railway station was in Steeton and the pub was in Silsden, a 20 minute walk down a main road.  As I tried to find my bearings in the rain, I thought I was very clever when I saw a bus with 'Silsden' written on the front and hopped on, paying £1.20.     But we sat there for 10 mins, and due to rush hour traffic, crawled all the way, putting me behind my military style schedule already.

Gah!  At least the bus dumped me right outside the pub and for a moment, my heart soared as I saw a Tetley's lantern, some fine external tiling, and some moody old men behind frosted glass.  Don't be silly Simon, that was the pub next door!

So yeh, a bit jealous of people who are ACTUALLY ALLOWED TO CHOOSE what pubs they go in..  But this lively twinkling former bank (probably Yorkshire Bank cos it felt a quality establishment, yes), done out in a weird kind of 50's American Rock n Roll Baroque style was more than acceptable, as it turned out.  No matter what weird and wonderful decor they'd gone for, the pub remained staunchly Yorkshire, full of men in flatcaps looking you in the eye and expecting the same in return, lots of nodding and 'ow do's'.  The ale by Wishbone was phenomenal, a lady tried in vain to train her dog to "sit", and when it finally lay down out of pure exhaustion, she tried to make it out it had finally obeyed her.  One bloke was apoplectic after an argument he'd had with his missus earlier ".... and she says to me go 'ome and make yourself beans on toast!" concluded the story.  As Mulder & Scully by Catatonia played on what felt like a 25 minute constant loop, I leaned on a weird metal stool near the entrance and still felt content.  Never got so far as removing my scarf, coat or hat, not because I was cold but because it was a 'statement of intent', I needed to spend the minimum 27.5 mins (probably!) in here and shin it back towards the railway station.  A pleasing start to the evening though.

Now for the tricky part of the evening, getting to Haworth!  Traffic was still gridlock as I walked back to Steeton & Silsden station, sheep were sheltering behind a dry stone wall, so it still felt nicely rural.  I managed to get a 'delayed' train, so I got into Keighley sooner than expected, from where I walked to the bus station.

Next for a bus to Haworth, I was the only passenger so he turned all the lights off, and we went round the houses and bumpy lanes and I felt quite travel sick when we finally arrived at the top of the hill in town, where the wind blew in a real Wuthering Heights kind of way, nice and atmospheric. 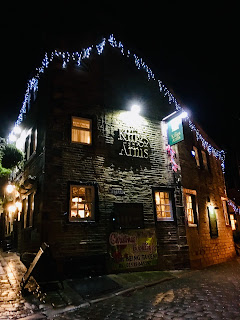 And they were obviously going for the 'Full Bronte' (no I don't mean it was full of naked blokes from  Sheffield) as I noticed the ales were all named after the clan -  Emily, Charlotte, Anne and Branwell.  I went for Branwell, the dark complicated stout which left you craving opium and laudanum from that Olde Sweete Shoppe next doore.  The blokes at the bar were all on the Anne, the consensus was that she was drinking well.  The pub had a strange kind of vibrant atmosphere, dare I say it, "Christmas Party season-ish" and a large space had been cleared for presumably some 'live act'.  The main barmaid I suspect fancied herself as a bit of a Bronte sister ghost, with her crazy dress, powerful presence and ethereal air.  She sounded a bit Irish, and I don't know if she'd got all her mates over from Belfast or wherever, but a huge group of blonde bastards monopolised the space, saying things like "awwww, you heard that wee dog baaaaarking, so it is?" and similar unanswerables.  Under the circs, I thought it might be amusing if I tried to adopt an 'anguished' Branwell persona, keeping my long black coat on and looking moody.  Not sure he wore a fluffy green hat or fingerless red gloves, but I was doomed to failure anyway, on when trying to pay for my pint, I mistook my bus ticket for a fiver.  Oh, of course the barmaid had to be attractive.  These things never happen when I am served by some pot bellied curmudgeon.   So with my persona shattered, I shuffled up to let a group of three sit down with a bottle of prosecco in an ice bucket.  Kept my ear to the ground re the forthcoming live entertainment, and found out we were due a stand up comedian AND a Johnny Cash tribute act.  Wow.  Wonder which was on first, could be important?  But we'll never  know, as I shuffled off into the night.

The bus actually turned up on time which seemed unlikely and soon I was back at Keighley, where I had more 'good luck' delayed train wise which allowed me to get one back to Bingley 20 minutes earlier than would've been the case for my final pub, and you might say 'key' pub (alphabetically I mean) of the night ......

Out of a side station exit, the rain still tipping it down, through  car park, across a road, up some mossy steps, and the pub was just to the right looking wretched:

Firstly, I don't know how to do a 'quarter' symbol on a keyboard, sorry.  Secondly, is having a fraction in your pub name acceptable?  Capital letters halfway through names have disturbed me before, and I'm soon to go to a pub with a question mark at the end, which I think is quite upsetting, or at least makes me think it'll be shit.  So was this Harry Potter themed?  That could be quite amusing.  No.  This was on the cosier side of the micropub fad, despite the high ceiling making you feel like you were in a barn.  A man with a beard (aren't they all) was sampling all the ales and failing to make a decision, so I jigged about frustratedly behind him and made a point of bellowing "BEST BITTER PLEASE, PINT!" before he'd even left the bar, for there was a pump with the London Underground symbol on and it simply said Best Bitter, no brewery, percentage, additional wording, perfect.  But I was winning any brownie points, as he was short on change and I paid using a tenner for a £2.60 beer when I had change aplenty (but had to save it for bus tomorrow morning!) so don't think he was impressed.  Took a while to get a seat, showing the popularity / failure to maximise the floor space in the pub, and I ended up joining two overly Emo middle aged drunken blokes on about relationship problems, oh dear.  I delved around for my green highlighter that'd gone missing, it felt like a metaphor for them searching for their manhood, perhaps!  Nice guys though but never EVER let BRAPA sit at your table.  And on that note, time to leave, but not before I noticed a great feature, a little model train set going around the bar, train disappearing into tunnels and getting failing to reappear, how very Northern or Transpenine.  I believe there's another pub or two with something similar, Nottingham?  Stockport?  but was a nice little quirk to end a good evening's ticking. 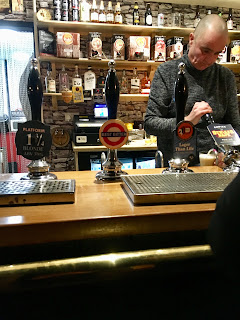 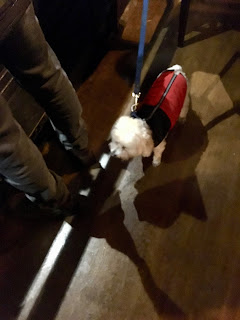 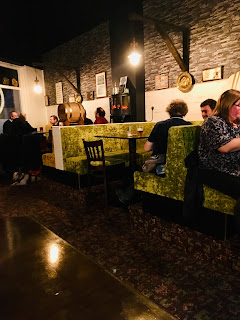 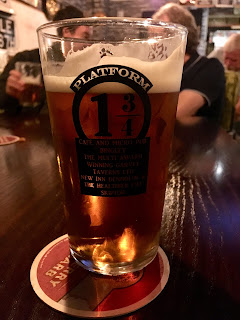 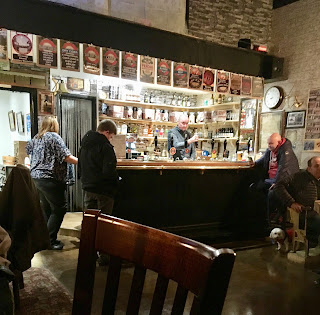 So that is November complete, a better month than expected.  I'll review it and do a December preview same time tomorrow evening.

Til then, so long farewell chums,