As I sat on the sand dunes above Gwithian and Phillack eating a bargain bin chicken tikka sandwich as the waves crashed in and twurfers (you guessed it, twat surfers) ran around in tight costumes like a cross between David Hasselhoff and Mr Blobby, I had to reflect it had been a difficult Thursday so far.

Four different beers tried, two in Driftwood Spars and two in the Victory Inn, all poor.  Consolation, both pubs had plenty of quirky behaviour to keep me entertained.  To make matters worse, I'd had to hop off the 20 minute delayed bus early due to urgent need for a toilet break!

But this was ok because unbeknownst to me,  my next pub didn't re-open til 5:30pm anyway.  After a few wrong turnings across the dunes, across caravan parks and main roads, it was 5:28pm when I arrived.

It was bucketing it down by now as I stood in the car park scaring the locals like a shadowy hooded  drug dealer, but the 'dealer' on the other end of my phone was actually my Mum telling me about our cat Ruby and her chest infection.  So take that judgey Phillack locals!

5:32pm when a back door of the pub was 'finally' unlocked (tsk!) and to my amazement, an oldish couple of droogs edged in front of me and got in first - how had this happened?  Daresbury all over again!

Ah yes, another one of those highly anticipated pub ticks, due to the pub name and associated gory legend relating to a pub ticker of old who wrote a bad review of the place and got pushed down a well never to blog again.  Am I about to learn those lessons?  Well no, not really.  The second warning sign (after gentler pub sign) was 'how come it isn't in the GBG this year?'  After all, with at least 33 appearances dating back to 1978, breaking an unbeaten run going back to 1995, there MUST be a reason.  Early signs were good, I even said 'hello' to a plastic bat hanging from the ceiling, and in the main bar, you could feel the electric old atmosphere, helped immensely by the ridiculously low ceiling.  I'm only 5 foot 7 but even I had to duck in places!  The couple, both rather statuesque (but very miserable and had been married so long, they'd morphed into each other, having the same short grey back and sides) found it impossible to stand in any kind of comfortable position.  BUT, and it's a bigger but than Beyonce's, apart from ONE seat facing the bar, every other table with chair attached to it was kitted out for dining with a 'reserved' sign on it.  EVERY ONE.  Try as I might to find a seat, and perch my pint on warped bits of adjoining wood, I couldn't get 'stable' so I ended up ignoring the signs and sitting in a reserved booth, just HOPING they DARED to try and move me.  They didn't.  What's worse, the landlord was a right old grump, and wheezy like a cat called Ruby with a chest infection.  I'd like to see someone try and force 2 tablets down his throat twice a day!  I drank the local 'Bucket of Blood' ale, probably something rebadged, it was better than what I'd drunk so far today.  But even so, you could see why if local CAMRA had come in here and witnessed what I did, why it might be de-guided after all these years.  I stole a sachet of tartar sauce in protest.  That's why I'm a punk.  They had the 'specials' board on a plasma screen FFS.  Talk about trying to kill a classic old pub!  Cornwall's already proved you can add food to the mix without going to these lengths.  Even a twild found his way into the booth in front of me.  His Dad had the voice of Paul McCartney.  That was the final straw.  It was time to leave.  Sad, such an anti-climax. 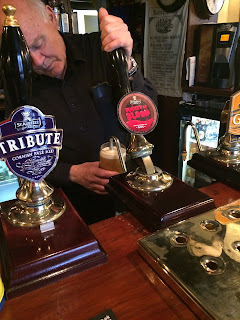 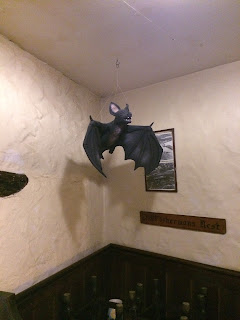 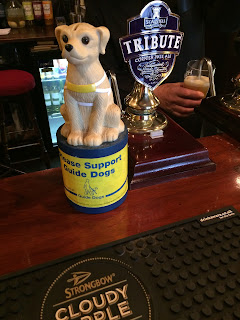 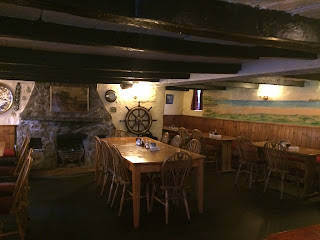 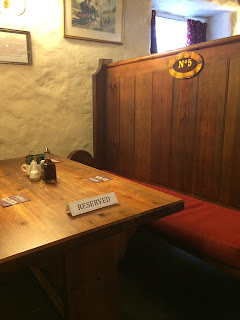 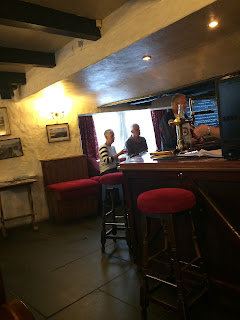 But not to worry, because my intense GBG research had made me notice somewhere else not far from my hotel which I could walk to.  Yes, a sign at Loggans Moor said a place called Angarrack was only half a mile walk, and with 12 appearances between 1989-2009, perhaps it had something to offer?

It is pronounced Anne Garrack rather than Anger Rack, just in case you ever go, a beautiful little place with a railway viaduct which apparently it is tradition to piss against if you see one on a pub mission, so says Cooking Lager, so it must be true.


I can't say my expectations (or arc of urine) were too high, what with no GBG appearance since 2009, a rather battered looking old building, and two men having to restrain their Rottweilers from eating me as I tried to get inside. 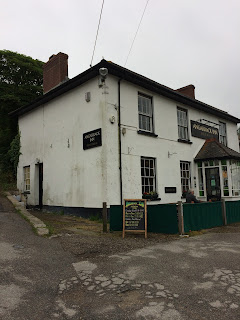 But what a surprise to find a lively bustling community local upholstered in green (green tiling, always a winner!) with plenty of smiling faces and friendly staff.  I'd generally say the GBG can be trusted to take you to the best places, but 'eckie thump, how can this not be in ahead of the other pubs I'd been to today?  Well, I'll tell you why I reckon it was - it only had two ales on.  And as better pub and beer bloggers than me have mentioned in the past, too many CAMRA folk think 'beer range' is a valuable decision making factor, you only have to note Rook & Gaskill winning York's Pub of the Year with depressing regularity to know that it happens in place more ale focused than Cornwall.  So, Lancaster Bomber or Dartmoor Legend?  I went for the latter, to the chagrin of the bloke next to me who was just swigging off his dregs.  "Don't sell him too much of it!" he says to the barmaid as he leaves.   As I sat in the corner, one of those 'moments of contentment' swept over me, for it'd been a trying day up til now.  People kept smiling, some actively leaning in to try to get in my pub photos and that never happens!  Eventually, the barmaid who was absolute first class came over to ask why I'd choose to come here, so I explained BRAPA and my geeky research of past editions, and added I thought this pub was better than a lot I'd been to this holiday and "I'm not just saying that!"  She whispers confidentially "go on then, what is the WORST pub you've been in so far this holiday!" which was a great variation on the usual boring question of 'what is the best one you've been in?'.  In my notes, I wrote she was like Angie Watts from Eastenders without the Dirty Den marriage traumas.  A few days after, Leslie Grantham carked it.  A BRAPA mention often gets too much for people.  Classic pub this, better get in next GBG or I'm going to live in a mud hut in Grimsby. 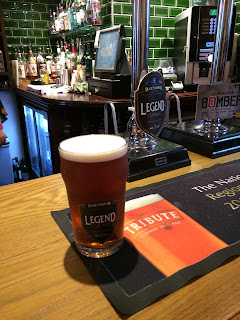 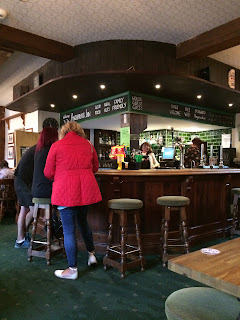 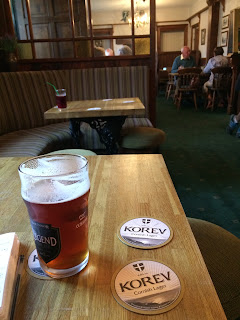 Buoyed by this experience, I thought it might be quite 'amusing' to pop into the pub joined onto my Premier Inn, a Brewers Fayre no less!  After all, it says on Whatpub it sells real ale, and can't be any worse than the Great Yarmouth version, nothing can.  Ever.

The chaos of food ordering in the midst of the most disorganised set up in recent BRAPA history went unnoticed at first, I was simply focused on getting served and getting the hell out of the bar area.  Not sure if I go more Yorkshire when I'm drunk, but I must've said "ey up lad, pint o' t'Proper Job for me, and an 'alf for t'whippet" because I've never seen a guy put the sparkler back on so quickly.  A nice touch.  What's more, the beer quality was better than any of the four previous pubs I'd been to today, wow!  I'd never have believed it, but it was first class.  As two Irish navvies started whining about the amount of food at the self service buffet running out, a woman on my other side kicked off at her boyfriend over similar unsubstantiated vague promises of plentiful food.  "Well, I'll go with it but I won't be happy if it runs out!" she concluded.  The staff looked decidedly edgy, blinking like rabbits caught in headlights, apart from my dude who was still fiddling with the sparkler in a relaxed manner.  Had I asked to do the "balancing a coin on the lemon" thing advertised at the bar, I don't think it'd have ended well for me, the coin or the lemon.  I walked through the curry-centric buffet area to a raised dining seat I had no right to sit at, but such was the confusion, the staff thought I was another man and tried to bring me 'my' prawn starter.  "Not me" I said, but when the real Prawn Man turned up (he was deaf so I interpreted buffet instructions for him on the premise he let me remain at his table, which he was happy with), I helped him retrieve the starter which had gone back to the kitchen 5 minutes ago.  A young couple on one of the least romantic first dates ordered dessert, but the boyfriend said 'pudding' which made her laugh uncontrollably.  Hope he binned her off next day.  "No idea what I'm supposed to do next!" said deaf guy when prawn starter had been completed.  "Just go down there and help yourself!" I told him with extreme patience but still a degree of irritability in my voice.  Why do so many people in life lack any kind of initiative?  Deafness is no excuse.  But this was an amusing end to the night, and a lesson to myself not to be snobby about Brewers Fayres in the future.  Who knows, they could be CAMRA's new Micropubs by 2020?

So that was that.  Could I squeeze in one last pub before my flight back tomorrow afternoon?  You know it'd make sense.  Join me for tales of that and more, coming soon!