BRAPA - Conquering Cornwall Part 5 : The Streets are Alive with the Sound of St Ives

My hopes for this blog title was that it'd sound like a punk rock album, but I've managed to only to achieve Julie Andrews levels of punk rockery (got some of that in my garden).

Anyway, just to re-cap, I was halfway through day three of the second year of my Cornish holiday.  St Ives was lovely, but the Wetherspoons had failed to enthral me as the Tinners Arms at Zennor had.  As for the Gurnard's Head, hard to judge, not being a pub and all.

It was onwards and down a narrow street to the bottom end of town, where the other GBG pub lay.  I had to wait patiently until passing by tourists (no doubt Germans) cleared to allow a decent external shot: 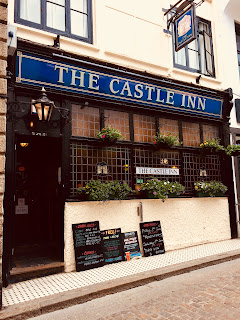 I might be the first person to compare St Ives to Doncaster, but have you ever been in Donny with all the disgraceful toothless chavs, deadheads, scroats and thugs in the street outside, and then you enter the Little Plough and the atmosphere just changes like switching a light on?  Well, this was like a less intense version of that.  Very much a locals pub like the 'Spoons, with the odd visitor wandering in randomly to this dimly lit, stained glass old fashioned joyful pub, not a million times removed from the Tinners Arms.  I was greeted by a few gurning barflies, and barmaid Louella , with her nose piercing and dungarees, a brunette of award winning qualities.  I tried to make myself 0.01% more attractive to her by saying I didn't much care for the try before you buy policy, and would rather dive straight in!  Hmmm, got a decent reaction. "Besides" she admitted "I don't know where any of these beers are from anyway, apart from THIS one, from St Ives" she said, indicating a beer with a huge pump clip that said St Ives Ale brewed in St Ives using St Ives recipes and a St Ives ethos.  Or similar.  How did she know?  It was slightly above average quality.  Music seemed to be main focus of this pub, and it seemed Louella was a musician.  I knew this because on four separate occasions, she started a sentence with "I'm a musician but ....." and she joined the old locals in some 70's prog rock meandering guitar singalongs.  Bizarre but amusing, they all sounded like cats being strangled.  She was bemoaning the fact she couldn't grasp "Boots of Spanish Leather" on guitar, and I'm assuming she means the superior Tony Duggins cover rather than the Dylan borefest.  Sorry Southworths.  I enquired on a pre-emptive I'd heard about called the Pilchard Press.  Louella told me it was "quaint", a bloke said "I'll see you there" and someone else said "doesn't open til 4 so you may as well 'av another 'ere arrrrrr" so I did, and it was better quality.  Really good pub this one. 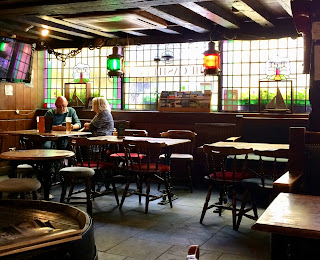 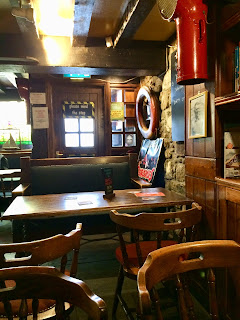 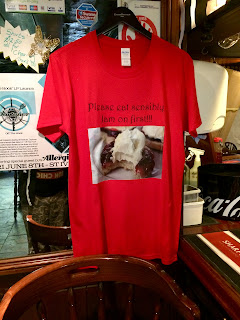 So I stepped hesitantly towards where I thought the Pilchard Press might be on the seafront, and eventually found an unlikely narrow opening which seemed to lead to it, as you might expect from any given micropub.

As pre-emptives go, this HAS to be a good one.  Not just because CAMRA insist on putting every single micropub in the GBG regardless of whether it's a chilly undecorated tiny square white room full of weirdos, a dog, a kettle and some lame microbrews you've never heard of, but because in the case of this place at least, it was rather wonderful.  It all started as I was having the usual 'phone troubles' that blighted me throughout my two week holiday, so was lurking in the above bin area waiting for my phone to unfreeze so I could take the above photos you see now.  A man appears from the pub, seems to automatically know I'm a first time visitor (cos he is there the entire time), grabs me by the shoulder, and leads me into the pub, giving me a running commentary and introducing me to barmaid and mates, telling them all about BRAPA, which I must've mentioned on the way.  Well, what a glorious place, dark atmospheric, mural of the town Bayeux Tapestry-esque, plenty of micropub hallmarks, but a bit beyond that.  So genuinely friendly and easy to chat and laugh without anything feeling forced or unnatural.  Like they tell you micropubs are supposed to be but rarely are.   Beer fantastic too, and actually nice to see ales that for once weren't Sharps, St Austell or Skinners.  This guy was almost too good to be true, must've worked for Hillier Enterprises Plc or something.  I saw the guy from the Castle Inn sat in the corner and shouted "IT'S THE GUY FROM THE CASTLE!" and waved madly at him.  He nodded.   I'd either had too much ale or was simply euphoric.  All was going swimmingly til I innocently asked "So, is this the only micropub in Cornwall then?"  Well, a thoughtful hush descended on the pub, one bloke ran to get a book from the bookcase, the barmaid scratted around in the till, and an Australian who'd been lurking menacingly behind us slumped over a nearby beer barrel and made a strange noise.  After much debate, the conclusion was "Redruth had one for about two minutes", "The Liskeard one is actually in Merseyside"  So it seemed perhaps it really was.  And now I'd killed the jovial atmosphere, it was time to run for the bus.

And that was that!  bad news was I can't remember the bus ride back to Loggans Moor, but the good news was, I'd had quite a steady day (was back early) and when I looked at my GBG map, I really didn't have too much left to do in my remaining day and a half.   But what weirdness would Thursday hold?  Plenty. Stay tuned.