After the traumas of Tuesday, where I walked the Lizard peninsula and beyond, dabbled in some Spingo Special, and paid a fortune in taxis, I needed a 'steadier' Wednesday, and was feeling surprisingly fresh as I took the bus to St Ives at 10am but maybe that's the Premier Inn mattresses for you.

The rumours were true, St Ives is a gorgeous little tourist hole.  Narrow streets and steep hills make it less than ideal for the pub ticker on a mission, it is far more suited to the aimless gawping wanderer, and despite being on the pavement, a car wing mirror hit me in the hand leaving a bruise!  When I looked up to shake an angry fist at the driver, I noticed the wing mirror was already damaged and taped up, and the registration number was German.  Make of that what you will.

This wasn't a good start, and no time to appreciate views like this ...... 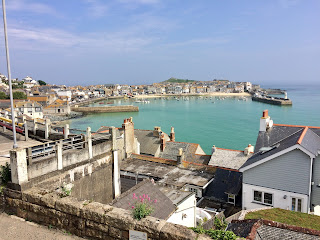 .... because a bussplainer was in my ear telling me I was stood in the wrong place for the Lands End bus and had missed it!  Noooooo.  I ran around the corner and luckily a queue of confused Germans was holding up the bus, so I just had chance to jump on.  German retribution.  Ich liebe dich meine kleine lieblings.

We headed into the beautiful yet desolate moorlands for my most western GBG Cornwall tick unless you count the Isles of Scilly (which I'm not, yet) and having seen a picture of it in a book, I could see it on the horizon from miles away.  Meanwhile, after a stirring rendition of 99 Red Balloons (ok, that was just me trying to fit in), the Germans all hopped off at Zennor hoping to see a Mermaid with hairy armpits, probably. 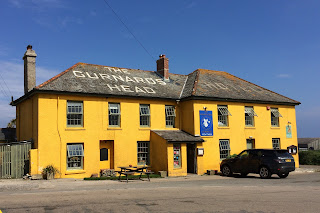 Quite spectacular isn't it?  Well, from the outside, certainly.  But when I saw the 'Eat Drink Sleep' logo, I realised it was part of the same chain as the less than convincing Coastguard in Mousehole.  And my fears were confirmed when I realised I'd walked into a restaurant, albeit one with excellent staff and above average beer quality, even if my early ale order and exact change did cause the odd look of bewilderment.  Now I wanted to sit inside, get a feel for the place, but apart from a tiny central room which wasn't much more than a glorified walkway, and no comfy seat, I sat at the picnic bench at the front of the pub you can see in the above photo, but not before being an idiot pub tourist and getting in the way of waitresses with my photo taking and bumbling apologies.  Oh well, with the sun baking down, the stray Germans who hadn't gone to Zennor were in the midst of putting walking boots on, looking at maps as birds of prey circled ahead.  People kept clocking me and my pint, and nodded respectfully at me in that "ooh he's got the right idea" (in German) way.  All was calm, serene and life giving until an old man with a wheezy chest parked himself next to me and started drinking fizzy water like the monster he was, two women scooped him up like a dried up dog poop, and took him to the back of the pub where he couldn't do any more damage to my sensibilities.  An excitable man who'd gone into the pub for a wee returned to his waiting wife in the car and exclaimed "there's books in there with secret pictures!"  No idea what he meant. 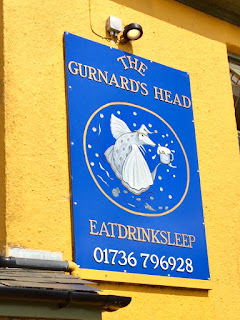 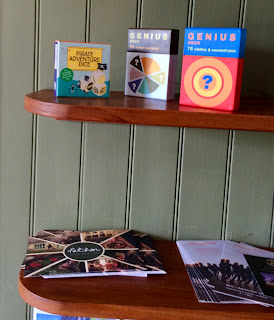 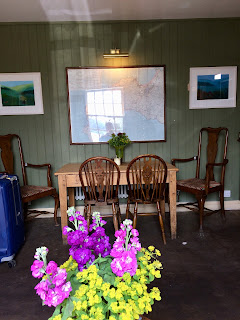 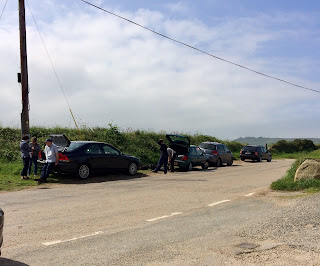 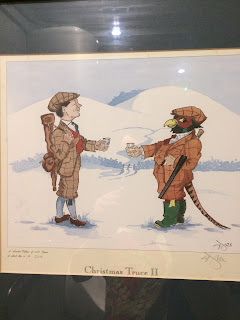 There was a nice little epilogue to my time in Treen.  I'd been getting increasingly paranoid that the bus times I'd written down were a load of cobblers, and when I saw a man stood up on a grassy knoll behind me waving his phone in the air trying desperately to get a non existent reception, I asked if he was waiting for a bus.

"No, I'm looking for my photography students but they've gone missing, we're supposed to be photographing Choughs". Cornwall's poster bird!  "Typical students!" he moaned.  Oh, this was BRAPA gold, I thought.  I told him my bus quandry and about BRAPA and how Zennor was my next stop.  "I live in Zennor, and I love that pub!" he replied.

After a moments hesitation, he told me he'd give me a lift down there in the absence of any forthcoming bus.  What a gent.  He thought he might find his students there, or see them on the road.  He dropped me off, and I wished him luck in finding them.

It took me ages to find the entrance to this pub, honestly!  Through a beer garden, skirting around the kitchen, past a toilet, under an archway, turn left, in through this little door.  Phew. 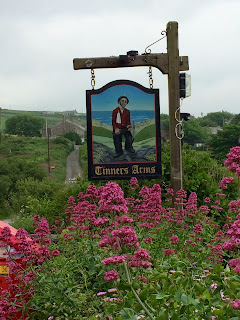 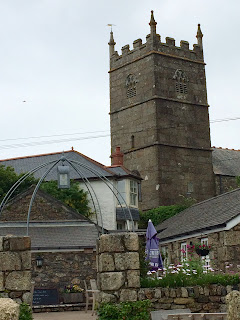 I wasn't expecting much.  7 GBG appearances in total, and this its first since 2011.  Yet the moment I stepped inside, I knew I'd found an ancient establishment of extreme quality.  Low ceilinged, deliciously dark, bench seating, soothing atmosphere, and I was greeted by a barmaid duo, a cheery young lady and a stony faced Russian with the driest sense of humour in central Zennor.  The former was telling a story, "all my friends had a horse when they were younger but I was never allowed one.  There's a picture of me sitting on a cow with a dress on!"  I blinked in the darkness.  "Sorry for the mental image" she added to me as an aside, which made me ordered the wrong beer, it was fine, ok, average, but not the 5% one they recommended to future customers.  A few colourful characters arrived, more tourist than local but still worth the entrance fee.  "What is the soup of the day?" asked an old couple.  "It is such a surprise, even our chef doesn't know!" But it later transpired it was carrot & cumin, and carrot & coriander yesterday!  If this was the Queen's Head in Newton, it would of course have been "deep red" and "slightly deeper red" which of course, isn't reverse snobbery in any way(!)  A woman then got angry at her hubbie.  They came in for lunch, well she was starving but he just wanted to have a drink then go on a walk.  She ended up storming out.  "SCENES" as the kids say.  I hadn't finished scribbling this down from my judgey dark corner, when an Australian couple arrived at the bar.  This was getting better.  "Can I have a darkish beer with minimum hops?" said the bloke, or Ozmudgeon as he was probably called.  Amazingly, they had one.  "And I just want water cos I've gotta droive these scary roads of yours!" shrieked his wife to the Russian barmaid, who gave her a look of such contempt, it convinced me this was one of the best pubs this holiday. 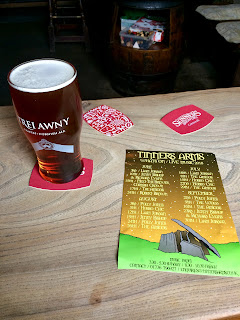 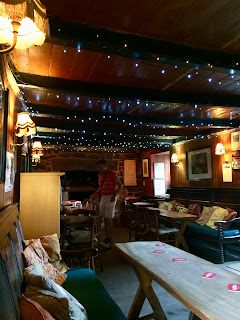 At the bus stop, I was glad to see the moody German bloke I'd sat next to on the bus was now waiting to get back to St Ives, and some surprisingly English ladies.  The bus was open topped, so I went upstairs, and it was a brilliant journey back, but when I nearly hopped off too early, I sat next to the English ladies and told them about BRAPA.  They winced when I told them Wetherspoons was next on the agenda, "waaah waaah waahhh why don't you go to the Sloop?" which everyone I've since spoken to about St Ives has said.  My reply "Not in t' GBG mate, not interested!"  But how interesting was a 'Spoons going to be that looked like this? 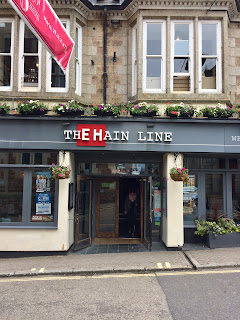 It seemed amazingly small for a Wetherspoons, which I suppose should make it 'cosy' but didn't really as it still had big staircases up to a second bar and toilets, just a bit squashed in really!  A GBG debutant, so presumably recently opened, does St Ives really need a 'Spoons?  York doesn't and has two, both quite useless, so there we go.  This isn't Maltby you know.  Staff were switched on, always good when someone with a 'trainee manager' badge gets behind the bar, puffs out their chest, and helps serve to clear the lunchtime rush, and then looks with disdain at their underlings as if to say "you'll never reach my awesome levels in your 'Spoons career".  Only chain I know where this happens.  High stool posing tables were the order of the day, and I spied a locals corner by a Cornish flag, which the local old blokes seemed to be trying to guard as their own little territory.  I wasn't having this, so I barged past them so I could get a seat out of the way.  It was perhaps the highest high stool I've ever climbed onto, practically nosebleed territory.  Uttterly ridiculous.  With local Peter Beardsley, living Keith Chegwin and a tracksuited slob with the voice of Neil Warnock holding court, I did wonder whether I'd have been safer upstairs with the tourists, but I'd made my bed and had to lie in it! 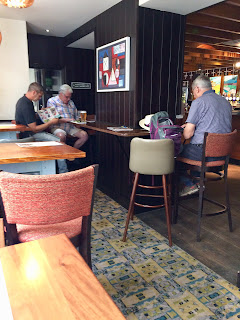 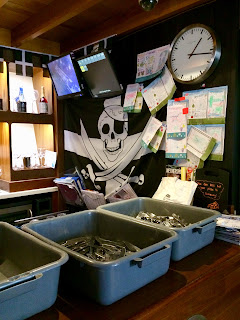 It was ok though, for happier St Ives pub experiences were waiting, and I'll tell you about them plus a couple of pre-emptives next time out.

I'm actually not pub ticking tomorrow, a rare Saturday off.  Punishing myself for falling too far behind on my blogs!  Plus I'm all a bit pubbed out after the holiday, a little bit skint, and dare I say it, actually enjoying the World Cup.