Redruth is a particularly scuzzy place for a county as delightful as Cornwall isn't it?  My second time here, both times waiting for a bus to take me elsewhere, both times inhaling vape smoke from an intimidating selection of tribally tattooed denim shorted hooped earinged blingy vajazzled (probably) mofos (whatever they are).

More people watch Love Island than Poldark in Redruth.  Fewer drink cask ale here than in any other part of Cornwall.  These are BRAPA facts.

My bus, when it finally arrived (everyone else went to Truro like it was some amazing vision of the future), was a rusty minibus with an engine of a lawnmower, driven by a slightly insane happy hippie dude, very much like the school bus driver on the Simpsons.

A weird lady started talking to me.  She was trying to be friendly but there was no 'clickage' and I couldn't wait to escape her clutches.  I was thrown off at a stop called 'Peterville' and walked downhill towards the sea, where St Agnes became a place called Trevaunance Cove.

It all sounded deliciously Scooby Doo, as the pub came quickly into view.  #RhymingWithSimon 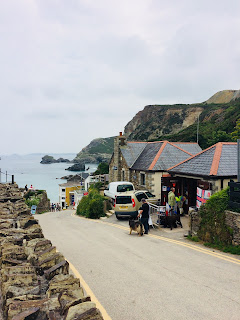 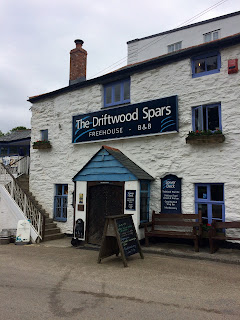 The pub wasn't open on time, so I tutted and went to look at the cliffs, sea, and a second hand book collection of dubious nature: 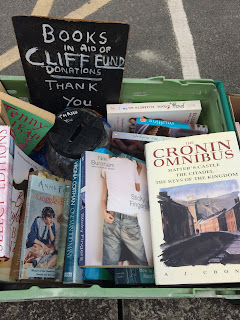 After buying my copy of 'Sticky Fingers' (it's what the cliff fund would want .... I didn't really), I turned around to see a robotic looking woman opening the pub and mechanically faffing with a blackboard, so I breathed huskily and glided my way inside (sorry, that book is getting to me).

Taking the pub on face value, and not thinking too hard, this was a gorgeous little place.  Decorated in that nautical style, obviously old, it was a pubby pub no doubt and evoked memories of other Cornish classics like the Star in St Just and Five Pilchards in Porthallow.  Yet, this part of Cornwall was obviously a bit of a tourist hot spot, and its attempts to cater for this crowd (it is also big on live music) meant it lacked something of that rugged Cornish edge which separates the 'good' from the 'brilliant'.  Our barmaid 'Sarahbot 2.0' was now behind the bar (I was the first customer of the day) offered me a range of locals beers which she proudly told me 'were brewed in that little building just across the road'.  That dirty looking shed I'd seen earlier?  Tasted like it too, flat, warm, and the most expensive pint of my holiday by a country mile.  Served in an awful straight vase of a glass.  To make things worse, I'd inadvertently handed over an old £1 coin and it was rejected.  "It happens" said Sarbot.  Yeh, it happens in isolated dead & alive holes like this, I thought, and turned around to glare at a judgey local fisherman type in oilskins who I was convinced had sat behind me and was enjoying this whole incident.  But when I turned around, NO ONE WAS THERE.  What's worse than a pub ghost?  A judgey Cornish pub ghost.  As I 'admired' the pubs attempts at quirky humour "Keep your pet rock on a lead", "Soup of the day ... Tequila", a few more barmaids appeared, all variations of Sarbot.  Such a funny bunch, friendly on the most basic of levels, programmed to chat with tourist family groups, but if you go 'off topic', they look uncomfortable like they are about to short circuit.  I'm sure they make them out of scrap metal in the shed out the back.  She tried to palm off some local 'Real Ale Guide' onto an obnoxious cockney family man, but he declined the offer on the basis that his pub gets a Canal Towpath magazine which he puts straight in the fire.  Twat.   I still had an hour til my 2 hourly bus, so I went up for another pint.  "Beep beep beep, how did you get on with that first pint?" asked Sarbot after a quick reboot, with a miserable local barfly looking on.  I had to lie, it'd been average at best.  So I deliberately, for comedy value, read straight off the pump clip "errrm, it had a light, herbal and fruity taste!"  But Sarbot wasn't laughing.  And neither was Mr Moodychops.  AWKWARD.  I returned, disconsolately, to my haunted corner, with a darker brown variation of the same filth.  Sarbot was bonding with a new cockney family who'd come in for lunch.  The Grandma character didn't trust contactless payment so entered her PIN.  "Ohhh good for you!" gushed Sarbot. Ugh.  'How about paying by cash ya dickheads?', I thought, but then remembered my fake quid coin incident.  In conclusion, I think you'd enjoy this pub more than me, and I'm being a bit harsh, it's just I was cursed by a dead fisherman. 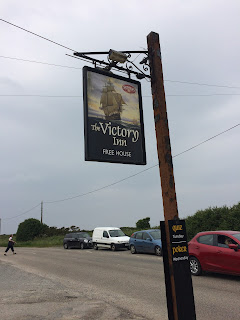 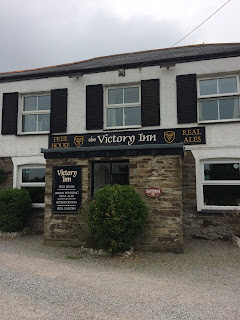 'Ah, this is more like it', I thought as I went inside, unpretentious comfortable almost estate style pub with teenagers with braces (on their teeth and obviously not 18!) playing pool at the front, a smiling if slightly manic couple at the bar, and a German barmaid who put the 'bots of Trevaunance to shame with her open friendly demeanour from the get go.  I'd barely sat down with my pint when the excitable bar bloke starts pointing in the general direction I'm sat in and asks the pool playing kids if there used to be a piranha in a tank where the model ship is, just behind my head?  No one knew, and his female colleague/friend looked embarrassed by this random piranha outburst and rolled her eyes.  "Everyone used to feed it crisps and it got overweight!" he roared with laughter.  After an awkward silence, he added "we are from Hertfordshire and we do house clearances" , as though that'd excuse his odd behaviour.  They left shortly after.  I got chatting with the German barmaid, she even gave me the 'real ale guide' that they were slagging off in the last pub, and about ten back copies (very much the Tim Thomas of Cornwall), but there was an increasingly large elephant in the room, and he tasted of vinegar!  Problem was, I'd drank so much before I realised how awful it'd become, and we were chatting so well, it took me an eternity to mention it.  She admitted it seemed to be 'on the turn' and to give the pub the benefit of the doubt, I had a half of another beer.  Utterly dreadful.  "Is that one better?" she asked hopefully.  I lied and said it was better, wrong I know but all a bit awkward.  I simply figured 'there's no hope for some places' left half my half, and went on my way.


Such a shame as this pub was so likeable, yet beer quality like this is truly unforgivable and if this pub appears in 2019 GBG, then there's something wrong.  Luckily, it isn't a regular though 6 appearances since its 2011 debut isn't at all bad.  I'd been warned about Cornish beer quality, but I must admit, up until this morning, I'd not had any real problems.