BRAPA - Conquering Cornwall Part 2 - Helston is Bad for Your Lizard

In our family, I don't know why, 'liver' is always referred to as 'lizard'.  I think it might go back to Spanish family holidays, so if someone has too much to drink (usually me), the cry will go up "Simon, don't drink too much, it is bad for your lizard!".  And then we all laugh.  Everitt life.

There were no pubs 'on the Lizard' (little tricky bit like a boil that needs lancing on the south coast of Cornwall) in the 2017 GBG, but this year, presumably cos they knew I was trying to complete west Cornwall, they gave me two right buggers that'd hadn't been in for years, Manaccan and Porthallow.  Not even Martin Taylor has done these and he's been to Little Downham.  More on those pubs later.

But first, I was in Helston after a ridiculous double decker bus squeezed down country lanes from Penzance, the highlight of which seeing the Ship in Porthleven from across the harbour, sadly a GBG pub I didn't manage this time (it was 10:20am so not open at the time).  It's not a Guide regular anyway despite appearing in 1974, only FOUR in total.

Helston had a bustling little main street of mainly German tourists, the pavements had little streams of water you had to hop over on each side just to make tourist dodging that little bit more exciting.  The warm-up act before the 'main event' was a Wetherspoons making a GBG debut ..... 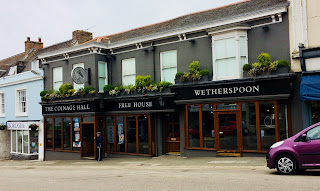 A one eyed man smoking propped up on a stick said 'arrrrrr' as I entered.  From what I'd read, he was the kind of chap I'd expect to see in the Blue Anchor (the second pub I was due to visit) but he obviously mixing things up a bit which was nice to see.  At the bar, a miserable looking lady served me some decent local honey beer, and then a posh English version of Crocodile Dundee came in and asked very politely if he could use the toilets.  She simply scowled at him, as if you say "can I even stop you?" and after an awkward stand-off, he went on through.  I don't approve of people using toilets in pubs without buying a drink, but we all get caught short on occasions (especially me), and his behaviour versus hers meant that I sided with him.  You could tell this was a modern 'Spoons as the colour scheme and decor were more post 2010 than the earlier efforts, i.e. no vibrant patterned carpets and cosy booths, but beige and pastel 'safe' colours, which created a chilly slightly drab air, especially at this early hour.  Sure there was a grand staircase, roof terrace, and it'd all been done to a high standard, but it lacked the charm of Camborne's equivalent last night.  You could tell it was new because the staff were actually signing the toilet wall chart to say the hourly cleaning check had been performed, and that NEVER happens.  One girl had even signed it with a smiley ;)  And when another staff member, 'chiselled Dean Gaffney' approached me to ask if I was ok and wanted anything else, my view of pub staff in here had totally turned 360 degrees.  My table had crumbs all over, and when I tried to pick up the pub magazine so Tim could tell me what I should be thinking, it stuck to the table, so maybe this was more traditional 'Spoons than I'd first thought. 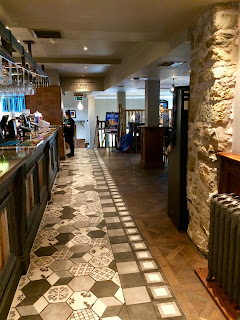 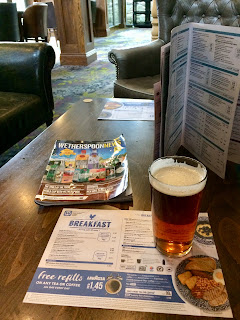 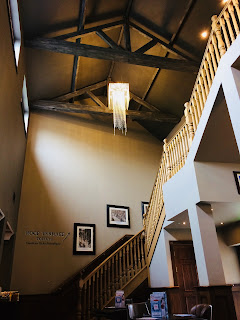 Anyway, there was no time to dilly dally, we ALL knew why I was really excited about being in Helston, and this was to visit a pub I'd heard about when I first became fascinated with pubs, probably over ten years before BRAPA begun.  With 40 GBG entries, it is second only to the Seven Stars in Falmouth for totally appearances on my list.

Anticipation built as my phone did it's usually 'freezing' trick (in for repair next week hurrah!) so I had to hover opposite the pub before I could take these two photos...... 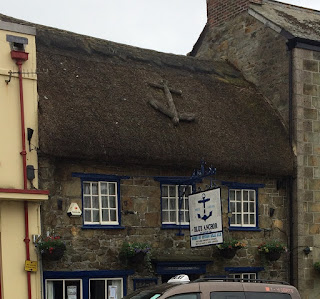 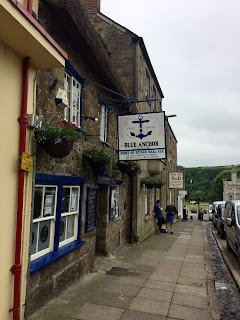 I decided the best way to approach this was to pretend as though I knew nothing about anything (DON'T!), and had just wandered in randomly off the street cos it looked like a pretty building with an anchor on a thatched roof.  The corridor was kind of 'open air' with various side rooms almost like chalets off to each side, beer barrels cluttered at the bottom by the bogs.  It felt incredibly olde worlde and very 'harbourside', you could feel the hands of invisible drunken scurvy sea dogs of old on your shoulders .... and this was before even a sip of their ale.  Oh yes, I'd heard so much about their home-brewed 'Spingo' beers, and knew the 'Special' was famed.  I opened the clattery old door to the right, and was immediately mobbed by a puppy called George.  As happens so often in local Cornish pubs, someone said "don't jump up George!" with the unsaid 'he's not one of us, you don't know him' lingering somewhere in the Cornish ether.  Soon I was asking about the ales, secretly driving her towards the 'Special' by asking 'so what do the locals drink?' but she kept pushing back towards this guest pale, and the 'middle', even giving me tasters of both , before I decided that playing games was a waste of time and said 'gimme a pint of Special please!'  I wasn't going to waste my once in a lifetime visit to here and NOT have it.  There were only two customers in, the bloke suggested I should've had a pint of 'mixed' which is half 'middle' and half 'special' to "take the edge off" alas it was too late.  I told him I'd only ever had a pint of mixed in Lancashire, but he looked at me like Lancs was a concept beyond his reach.  When he took George for a walk, I was left with a moody woman cos the barmaid went out the back, so that was my cue to explore the pub, and I sat in this delightful side room which I christened 'the BRAPA suite' as brewery blokes rolled barrels up and down the corridor.  Less than a third of the way down my 6.6% pint, the room started to gently spin!  Spingo Special. Now I know 6.6% is a strong beer to have at 11:30am after a 'Spoons pint, but I actually think was stronger.  Magical place, almost other worldly.  And for me to say that after a ten year build up in my mind means it must be a very good pub. 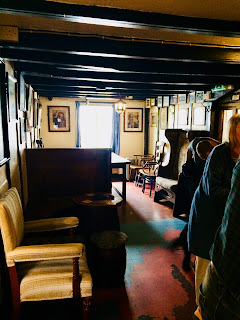 Coincidence that there was a taxi rank outside the pub?  Probably not, as I crawled from door to taxi and breathed Spingoey fumes on a poor Eastern European lad and asked him to take me to Porthallow.  I knew it'd be expensive but it was now or never, and I probably couldn't be better situated in terms of being near to civilisation but on the cusp of the Lizard.

Like so many Eastern European drivers I've had, he didn't give much away in his facial expressions, almost like an Iron Curtain of pokerfacedness.  As the lanes became narrower to almost farcical level, and we started taking wrong turns, I wondered whether he was loving this adventure or wondering what he'd done to deserve picking up a weirdo like me.  I kept apologising anyway just to be safe.

When we arrived, I thanked him profusely and didn't tip him on the understanding that this made up for the wrong turnings!  Which was more than fair.  Honest.  Or do I protest too much?    Anyway, glorious location once more, I breathed in some sea air as that Spingo was still making me feel woozy. 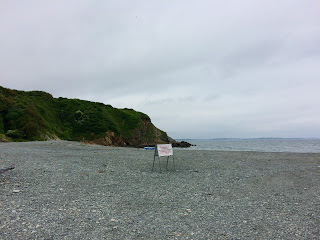 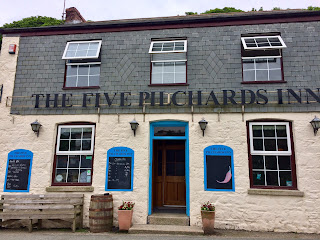 Following the Blue Anchor must be the pub equivalent of going on stage after Chas n Dave on a Sunday afternoon in a pub within earshot of the Bow bells.  So I feared for the Five Pilchards and that 'come down' factor.  But I needn't have worried, this was one of the most delightful Cornish pubs I've visited to date.  A totally serene atmosphere greeted me, one of those where you almost tiptoe to the bar and whisper your pint order (Trunk Bitter whatever that is) and take it to a table as carefully as you can, trying not to creak on the ancient floorboards, nudge a table, or scrape your chair on the floor.  A local who looked like a well fed cat glanced up at me from his copy of The Times, as if to say 'don't you dare disturb the peace, meow'.  I was happy to go along with him, what with the great nautical decor, another atmosphere that engulfed you.  Sadly, the peace was spoilt by a nobhead in a Christmas jumper and a cockney accent, who'd got lost finding the loos which were hidden outside in the garden.  I tell you, outdoor pub = great pub.  I went after him and the artwork was utterly frightful and uninkeeping with the whole situation, like something Beryl Cook painted in her 'acid farmhouse' years.  A Dad and his odd kids commented enthusiastically on the food, too much for Cat bloke who peered over his glasses and gave out a small 'mew'.  'Whisky' the dog came in and got much attention, which upset the other dog 'Jenice'(?) and then growling began, Cat Bloke looked terrified, hid under his Times, and the serenity of the past half hour finally died.

14th appearance in this GBG for this pub, but only its first since 2005, which surprised me, but a top Cornish BRAPA stat I'm sure you'll agree.