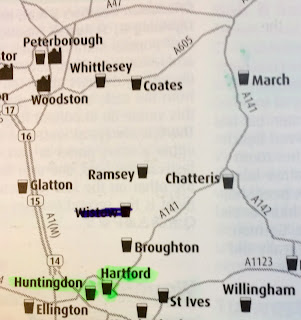 It was time to be brave and go it alone, sans-Taylor, for the third instalment of my Cambridgeshire leg of GBG ticking.  I was in Ramsey for just after 11am, the hour long bus journey from Peterborough had been a whitewater ride, I've never hung on so tight since I was on a bus in Ibiza (probably the Vengabus)  in the early nineties.

It was muggy, grey and damp as I saw the pub door ajar and walked in to that familiar 11am pub scene of a woman trying to balance the books using a giant ledger that's been used since 1722.  Oh hang on, pub photo ...... 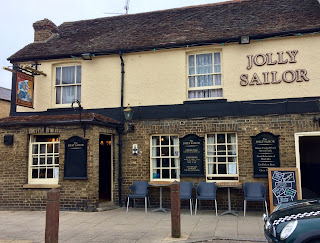 She looks up at me and says "how can I help you?" as if she was expecting me to say absolutely anything in the world, apart from perhaps "I'm after a pint of beer".  As the first customer, I couldn't test out my new 'Martin-way' of ordering by asking what has most recently been pulled through, so I went for a pint of Tribute, firstly because it had its own lamp, and secondly, because I am Cornwall bound soon.  A baggy man in baggy trousers (not Suggs) walked in with a stick and a limp and ordered something in an ethereal voice, and tried to talk to me through in the other room about what, the weather?  I couldn't tell so leaned forward into an ancient beam so I couldn't see him.   The piped music was doing nothing for this beautiful old building, especially when Ed Sheeran stopped me from hearing what the chef was saying to the barmaid.  I was also a bit too near the Saharas nuts dispenser, something as a nut allergy sufferer, I cannot abide in pubs!  A barmaid dropped a packet on the floor (looked like blood you have in a hospital) and got freaked out by the buzzing of the extractor fan, but that was as exciting as it got, and I was left to contemplate that when they hang jugs off the ceiling, do they ever fall down and injure people. 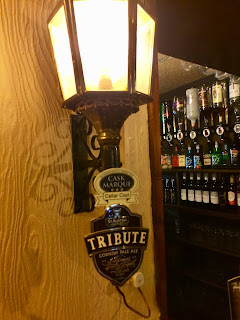 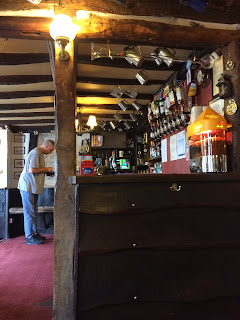 And that was that for Ramsey, or so I thought, because the plan now was to get a taxi from the company next door to the village of Broughton.  But the taxi company, strangely called Chaucreme, which sounds more like a boutique in Knutsford, was applying micropub laws of opening hours with a sign saying"OPEN" but being locked and totally deserted.

Ramsey is a total phone signal blackspot (but you get one bar if you're with Vodafone apparently) so all I could do was return to the pub and ask for them to book me a taxi.  Luckily, our erstwhile landlady branded Chaucreme a 'total waste of space' and rang this woman she knew.

But the woman was picking someone up from Worboys (as if that was supposed to mean something to be) and couldn't get here til 12:30pm.  "Well, this goes against the grain, but I'll just have to have another pint!"  I moaned, and baggy man looked at me like 'hashtag firstworldproblems'.

I propped in the main bar and explained BRAPA to a burgeoning crowd of old man, and baggy man, who was just as softly spoken close up as he was from a different room.   My ale (from Tydd Steam which I believe is Wisbechie, I have no brewery section so can't check!) was much better, the locals were great, landlady loved York, and I was just getting into my stride when Mrs Taxi rang back to say Worboys booking was cancelled and she was coming over now!

"Ho ho.  You'll have to neck that pint now!" said an old bloke who'd practically sat on my knee cos I was in HIS SEAT.  And I was just gulping down the last third when Mrs Taxi appeared, I said bye, shook hands with all, and left.  Well done Jolly Sailor.

Taxi lady was a redoubtable character who'd moved down here to get away from her annoying family, so assumed that's why I was doing BRAPA.  We wistfully drove through Wistow and spied the deleted GBG entry Three Horseshoes, closed but locals trying to take it over, an evil property developer blocked cos it's a listed building, and a beautiful thatched thing it looked.

Taxi lady waxed lyrical on my next pub, she seemed a bit in love with the owner Mark and said they did a great beer festival recently, and went the extra mile, by which she meant they give dogs extra chilled water from an old cask in the summer.  Hmmm, hope she wasn't building this place up too much, for as picturesque as the location was, the pub sign didn't scream "ONE TO ENJOY!"

There was no sign of Mark (as I had to pass the 'love' on from my taxi driver) but I got served by a PISS redhead with impressively framed specs, and said hi to a couple with young child who managed to just avoid slipping over into twild territory by behaving impeccably for the most part.  The 'pub' was as I'd feared, a restaurant in pub clothing.  "....And are you eating with us today?" is not what I want to hear when you've walked into a pub and eagerly ordered a pint.  I paid with exact change, she blinked like she'd not seen a coin since 2005.   I turned to find a suitable seat. A random pile of logs was mocking me under a chalkboard menu, and the emergency beer mat needed to come out for the first time in quite a while.   A couple arrived, "you got any drinks with elderflower in it?"  The request was dealt with a lot more sympathetically than it would be in Oldham.  Soon, they were having tasters galore of various ciders, wines and gins with elderflower hints.  But something was amiss, some heated whispered tensions coming from the barmaids, and eventually, a young airbrushed chap who wasn't Mark.  The cause seemed to be a group of shifty looking old blokes in the other room (who belonged here even less than me!), I'm not sure what the issue was but smiley blonde barmaid and evil ginger were getting a bit stressed with each other.  I was on blonde's side, for she hadn't been PISSY with me.  Some men with denim shorts came in and started guffawing so now was my time to make a break for it.  12:58 and I had an appointment to keep.  PISS wished me a good afternoon, blonde said a cheery goodbye, not at all my kinda place but by no means useless. 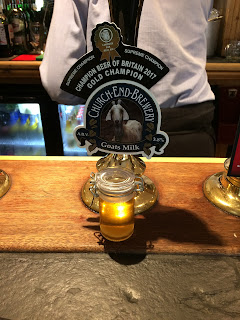 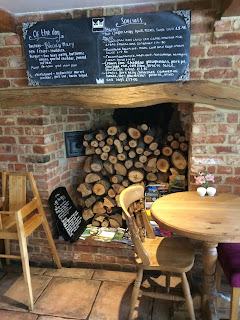 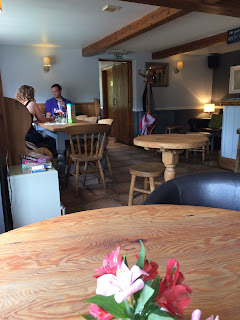 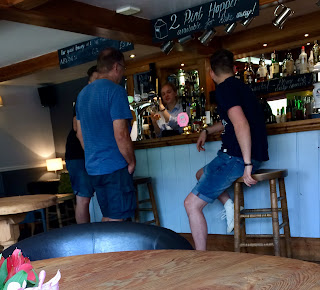 Yes, I'd asked Mrs Taxi to hang around for 27.5 mins and take me onto pub 3 at 1pm, for the two hourly bus service which still required a mile walk just didn't appeal.  She was happy to do so, and in true Taylor-esque tradition, I was there at 12:59 wondering where the heck she was, and was relieved when she swang back into the carpark at 13:00 on the dot.

I'd actually offered her chance to join me in the pub, and I'd buy a drink for her, seeing as she loved this 'Mark' so much.  But this was no Allgreave, and she declined.  Besides, she told me she now knew Mark wasn't working today, as she'd bumped into a member of staff outside and told them what I was up to.  Could this have been the smiley blonde?  We'll never know.

Onwards to Chatteris.  "Ooooh you're in proper fenland area now, the locals might be a bit weird" she told me.  Everyone I'd spoken to in the Ramsey pub laughed like mad when I said I was going to Chatteris.  Martin had told me a similar thing, and so had someone in Ely.

The pub looked closed.  "Nooooo, can't be!" but Mrs Taxi saw a man walking to the door, he turned it, and it opened, against all the odds!  Hurrah.

As I turned the door handle, I actually thought it'd be an anti-climax ...... and I don't so much mean the pub as the weirdness of the locals.  Probably everyone would be totally normal.  Wrong!  The barman however, did give me a friendly welcome and I ordered the same as the tall grey guy as it 'had just been pulled through' (see, I'm learning!)  But the way the four customers regarded me was more Royston Vasey than Royston Vasey.  Especially the old woman, like she'd never seen anyone from outside Chatteris in her life.  Maybe she hadn't.  I sat behind everyone so as not to be in the glare, where I noticed the most dreadful 'beermats' ever, these huge wooden blocks.  I spilt my pint about three times trying to get to grips with them!  The beer was good, but the pub was so drab, like they'd started decorating and then forgotten about it.  It just made the place feel sparse, chilly and dull.  I went for a well deserved wee to relieve any tension(!) but my Mum rang mid flow, I still answered cos I'm a good son like that.  I did have to put her on speaker whilst I sorted myself out, but back in the room, the locals were blatantly listening to my conversation.  Rude.  The woman was even turning round and mouthing something to me, I wasn't even being loud.  So I decided to do something a bit cheeky, and when Mum asked where I was, I recounted what the Ramsey locals had told me about Chatteris.  This was "they'll probably make you take your shoes and socks off on arrival, and if you haven't got six webbed toes, they'll turn you away!"  And it had the desired effect, for when I said bye to Mum, grey haired bloke marched over and asked me about it, saying he'd heard what I was saying to my 'mate' and how they aren't all like that, but of course some are, and of course, he isn't really one of THEM cos he lived in Cambridge for five years.  This sparked something else in his brain, because he then turned around and started talking transport chaos at Cambridge Strawberry Fair.  Before long, he started doing an impression of a Scottish midge biting an Englishman's neck.  "Tek that ya wee sassanach!" he said, before then doing an impression of the Englishman replying "stop biting my neck and getting all erotic with me."  So, believe the hype, Chatteris is barking mad. 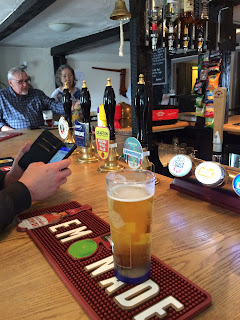 I had a bus to catch to March.  And although I did three more pubs today, I can't really remember much so expect a vaguer and happily shorter blog in part 2.