BRAPA - No Turning Back in Blackburn

FA Cup round 3 Saturday, "the magic of the cup", and Hull City had just avoided Crewe to send me to the marginally better (in terms of the pub ticking) Blackburn instead.  I said if we got anything away in a league one or league two town, I'd go, so here I was!

I was never gonna achieve my magic '6' allocation, but 3 or 4 would be a good outcome.

It all started smoothly as me and Dad arrived in sunny Blackburn early enough to get a swift half (which despite what my glossary said, this was a swift half and not a pint masquerading as one) in the Wetherspoons with a post office themed name I can't remember.


Although the 'Workie Ticket' tasted suspiciously like a 'half o' Wetherspoons' it was in good nick and friendly staff, toothless locals with baggy jumpers, a nice building and the odd  Hull City fan cowering under a newspaper (probably spying on me) made for a positive experience.   I did think before we arrived "in a town of pretty much zero ale options, this Spoons must be diabolical not to get in the GBG!" but it was okay.  Pre-emptive?

A local train took us out to Clitheroe between 11-12, where the bearded figure of Tom Irvin loomed like a wraith, but a wraith with unpasteurised milk he'd got from a farm shop, because he could.

Clitheroe looked quite a nice place compared with the black painted buildings with white crosses daubed on the doors and green skinned witches (twitches?) cackling I'd been imagining since I first heard of the town "Clitheroe". 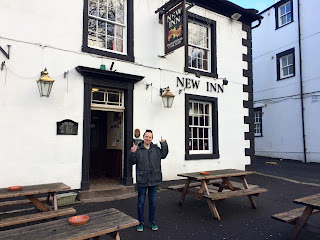 This was to be a rare moment of utter joy in a tricky start to January pub ticking, as a multi roomed pub led to a little bar parlour, where a group of curmudgeonly Lancastrian old blokes looked at us with mouths like they'd been chewing a particularly hoppy brand of wasp for the last hour.  I nervously said hello to the room out of the side of my mouth, until one man winked (but it could've been a nervous twitch ..... twitch?  This could get confusing!)   and we ordered some White Witch beers (I told you it was confusing) and a blackcurrant for the princely sum of £6.30ish, but still expensive for Chorley.  We retreated to the gorgeous room, front right of entrance, where sun shone in and bench seating was reassuringly worn with 250 years of Lancastrian arses sitting on them.  Dad told Tom and me an amusing tale about how too much unpasteurised milk causes testicular cancer, we stayed for another drink, a man said 'ow do' on way back from the bogs, and that was that, another surprising gem in the always rewarding East Lancs pubby portfolio.

We weaved our way through the market (Dad expecting to see a "Bob Inn" after recent Chorley and Bolton trips) and the train station was full of idiot twilds blocking the way by sheltering from the cold, on the way to the bright lights of Blackburn.


We hopped out one stop early, at Wilpshire where one of Blackburn's three GBG pubs (which aren't actually in Blackburn) were located, seconds walk from the station. 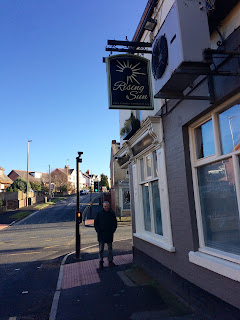 Another no nonsense classic boozer awaited us, the type that's sadly almost becoming the exception rather than the norm on my pub ticking adventures.  We walked through the pub to the bar at the back on the right where a tall bald imposing bloke gave us a warm welcome and helped us choose between Robinsons Dizzy Blonde and more Moorhouses.   I went the latter as something always goes wrong when I have Dizzy Blonde.  The barman was just about your archetypal northern landlord, the type who'd tuck his old Mother into bed with an extra blanket, before going out and strangling a crocodile to death which is terrorising the local community, which I know sounds unlikely in Wilpshire but you'll have to go with me here.  We sat in the sun again, and I did my Hull City quiz for Dad and Tom, Tom starting well, fading, Dad coming back late on but Tom holding on.  Here's some of the answers if you wondered:
1. Jan 1947 FA CUP AWAY 2.  Andy Payton 3. The Lambada  4. Peter Swan 5. John Motson and his Sheepskin Coat  6. Wycombe v Peterborough  7. Squeaky Aussie Richard Garcia 8. Bloody Meyler.
So there you have it.  I went to order a taxi to take us to the ground as I bought another round, landlord didn't seem to dial any numbers, just summons it from nowhere in his capable manner.  A really lovely pub, could easily have stayed longer.

The taxi arrived exactly when ordered, bit of a shame we hadn't really had time for the 20 min walk to the Hare & Hounds but there'll be other times.  The taxi took ages to get to Ewok park but he didn't charge us much, and unlike Bolton, some fans turned up and we played quite well (in a top half of League One kinda way) and won!

Buoyed by the pre-match pubs and win, I said goodbye to Dad on the way out of the ground and wandered towards south west towards Livesey to visit the Black Bull.  Now the fun really started.  I got so far down Heys Lane, burnt off the final few homes fans,  when in the puddles and dark, the pavement gave up and with cars whizzing past and not even a grass verge, I decided not to risk my life and try and approach it from Gib Lane, which meant an extra mile walk through Livesey's giant housing estate.

Gib Lane was closed to traffic, good news for me, so in the pitch black, I squinted past road signs and pot holes and crossed a busy road as the GBG App told me to do down a little track.

Past more pot holes, two cattle grids and under some sizzling pylons I went.  "No wonder they call the road the pub is on 'Broken Stone Road'" I thought, but soon, a mad dog barked and I'd entered a farm.  The pub must be plotted wrong on the GBG App!  Noooooo.  I was amazed the owners didn't come out with a shotgun.

I then realised why they hadn't - when I walked back up the track, they sped past me in their car coming back from somewhere.  I jumped into the soggy muddy field and ruined my shoes!  Then I realised the main road I'd crossed had been "Broken Stone Road" and the pub was out to my right.

But with even more pitch black no pavement, cars doing about 70 mph, I thought it wise to give up and head back up Gib Lane and begin the arduous walk back to Blackburn, beaten.  Ugh.

Had I known that the pub was actually on the corner of Heys Lane and Broken Stone Road, I'd have braved the slightly less scary pavementless walk at the beginning.  Arrrrgghh!  To be fair to the GBG, the description tells you where it is TWICE even if the red dot was wrong.

I decided to veer slightly North in the hope I might find myself nearer the other pub, the Hare and Hounds than I thought, but when I saw a Station called Mill Hill with a train delayed just long enough to get me back to the centre, I had to stop and wait.

I'd half given up and was thinking pre-emptives again when I saw the station sooner than expected - it was bang on 18:57, had I just missed it?  Amazingly, it was 3 mins delayed (first bit of luck all evening) and I sprinted up the ramp to get it!  Phew, saved me ages plus a change at Todmorden!  I read a Superdrug magazine for what seemed like hours - "Why Little Mix Love Christmas" and "5 Things You Didn't Know About Your Vagina" being the highlights, as an aggressive Strongbow man fell asleep and shouted at the train for being noisy.

Changed at L**ds, and was home in relatively decent time, starving, couldn't even be assed with York Tap.  Two more pubs, but slow progress so far in Jan and continuing Northern Trains strike on Friday means my Kimberworth plan could be in jeopardy.

It can only get better!