So, the White Swan at Barrowby and the Lord Harrowby not at Barrowby, had both been excellent BRAPA pubs, and it was time to see if the home of the Milk Snatcher could produce more cream of the crop, or would it be a lonely bottle of Cresta for the journey home?  (What AM I talking 'bout?  Even I don't know). 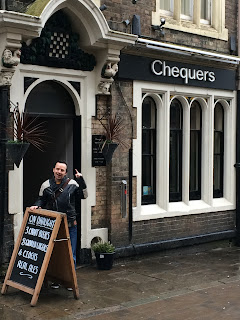 It was now open after our earlier failed attempt, where some local Twamra had published crazy opening hours uninkeeping with the reality of the situation.  Has a BRAPA pub ever produced such a bunch of punters who don't fit with the decor and ethos?  I cannot recall, for here we had a modern attempt, all dried flowers, low impossible seating and polished, beermat free tables.  But the punters, pubmen the lot of 'em.  All they cared about was ok beer (SBS C) , horse racing and taking the mickey out of each other.  And wasn't that quite reassuring in amongst all that top locale - THREE breweries I've actually heard of from Grantham.  Almost outnumbering GBG entries.  A depressingly common theme in some parts.  As we sat down opposite where the ghosts of a Really Wild Terry Nutkins and Bookish Mark E. Smith were hassled by the local weirdo, menacingly eating a sandwich through the window, tapping on the glass and generally being sinister, Dad observed how this atmosphere would be unrecognisable by 9pm tonight, funny because the GBG write up says almost exactly that.  I just like to think some newbie owner tried to revamp the place into a wine bar, and the local blokes were like "no, this is OUR pub".   Not my fave pub of the day, in fact the weakest, but more signs Grantham is a proper pub town.

We trotted on down the road to see a familiar logo rearing it's blueish head ......

Yes, as the great Tom Irvin once said, any pub that has a name ending in a 'Z' should not be trusted, and I think he has a point.  I'd been to the Retford 'vehicle' on the New Year's Eve prior to last, a bit of a stood up rushed job if truth be told, the layout and service here in Grantham was a lot more personable and relaxed.  I was served by a bloke with the size, shape and colour of beard which you'd expect to tell drinkers of cask beer to "fuck off you old CAMRA bore, I got mi £6.50 330ml DIPA", but luckily for me, the man inside the beard was a very pleasant helpful individual and we took two pints of some unfined glorious muck from Dorset (SBS A-) to a table out of view where we could smuggle more pasties.  There was a frightful wail from upstairs, a hired out for a private party, but a clear walkway to let you visit the "ladiez" or "gentz" which again, really don't need 'z' on the end.  A huge 'vegan friendly menu' blackboard didn't surprise me one bit, but despite these unhealthy concessions towards the 21st century (they probably let women in without their husbands), we went away feeling this pub had been a very positive experience.  And no Twildz either.

Probably not a good idea to save the weirdest pub for last i.e. the most intoxicated time of the day, and after thinking the name was weird enough, and hearing tales of a famous lurking giant spider, two quirky nice barmaids served me Newby Wyke beer (SBS B+) and Dad coffee in a bid to win a 2018 brunette award.  And we settled down in front of Gillette Soccer Saturday knowing we had time to relax before our train home.  The moment that most stood out was when Dad went in search of the loo.  Well, an old odd local at the bar wearing the bluest jeans in Lincolnshire was loving that he couldn't find it, and started giving an increasingly impatient Dad cryptic clues as to it's whereabouts!  Eventually, he had to be shown, you had to push this bookcase!  Ingenious and quirky most people would say, "bluddy annoying" was Dad's conclusion and that might be a direct quote.  Not sure what else happened, but it was enough!
Oh yeah, weirdest of all, Hull City won......


So that was that,  journey back was event free as we changed at lovely-ish slightly overrated Newark, just, and were back home for Cluedo, Red Wine and Cottage Pie.  Great day.