It was Dad's 71st Birthday, and as a "special treat", I booked us on a 'mystery' BRAPA train day out, totally unaware whether we'd strike Chorley-esque gold, or Stamford-esque misery.

Before he'd even worked out that the ultimate destination was Grantham (despite the ticket on the back of his seat saying York-Grantham), he told me how it was also Mozart's Birthday today, though Dad prefers a bit of Demi Lovato in truth.

But determined to upstage these two fine men was an 80 year old woman, who'd put on a party hat and cracked open the Prosecco well before Doncaster: 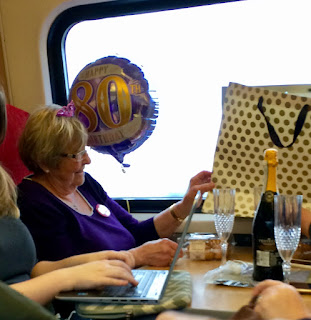 Once in Grantham, it started to rain.  Heavily.  It was freezing cold too.  And the so-called 11am opener Chequers had opening hours listed outside the front door which couldn't have varied more from the GBG's advertised ones if they'd tried.  Dad's third nosebleed of the morning made the walk even more painful (it's hard being 71) and I was beginning to think the Lincs curse had returned.

But we took a little taxi out to the village of Barrowby to kill that painful 11am-12noon slot.  Our taxi driver was a jolly motormouth who didn't hesitate or deviate from his given subject for the entire journey.  Shame as he'd been watching YouTube videos on flooding in York in 2000 (why I'm not sure) and we could've offered a local perspective had he BREATHED.

Dropped outside the pub at 11:50am but not so much as a light on.  Uh oh!  One theme we noticed today throughout our trip was how every clock in the area was set 5 minutes behind GMT (Greenwich, not Grantham).  Look out for that next time you visit. 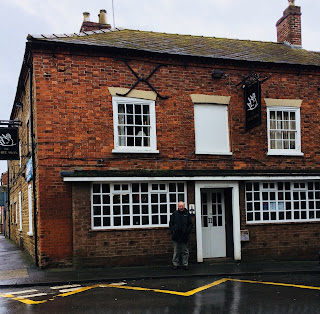 By 11:53, a shady silhouette moved from within.  By 11:57, a light came on.  11:59, an outer door opened and the inner door was locked again.  But Dad found a back entrance on 12:03, and I found Peppa the cat (variation on the theme) who gave a very friendly welcome for a notoriously 'naughty Tortie' brand of kitty. 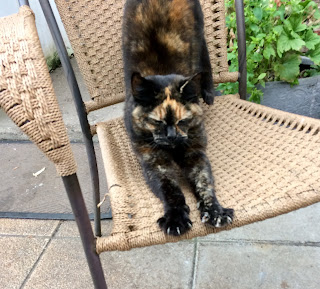 The feel good factor continued on into the pub, banishing those memories of dull pubs at places like Ryhall and Belmesthorpe which have been palmed off onto the almost imaginary county of Rutland cos the likes of Lincs and Leics are embarrassed by them.  Three ales on, and despite being skeptical, we went for some Burns Night themed thing from Bellhaven, but it was dark, meaty, rich and glorious (SBS B+) like a good Scotch Oxo whisky gravy.  Probably.  The three locals were like illustrated village locals from any century, and the landlord, who'd been here 25 years, presided over this cosy village classic with the effortless air of a man who knows his trade inside out.  A pre-prepared fire was quickly lit, and Dad wouldn't have been Dad if he hadn't sat back and said "eee by gum, I could in stay 'ere all day!" (which he now does cos he knows it'll annoy my BRAPpy senses).    Peppa had gone into her cat cave so I couldn't say goodbye, but after a tricky first hour, the omens were suggesting a good day.


We took the bus back to Grantham (despite me trying to stand on the wrong side of the road when I knew full well where the bus was coming from - Bottesford if you must know) and we walked from bus station over a little river to the furthest out pub, down an unassuming side road...... 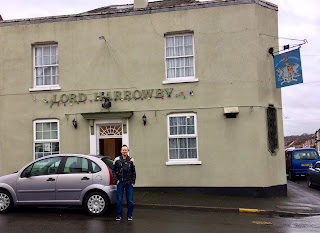 There's nowt much more rewarding I find as a pub-ticker than a traditional back street local, though this was pretty huge, it had a uniqueness about it that was impossible not to love.  It had at least one darts lounge, some real fires, and toilets where you needed to cross which seemed like about 5 hallways and rooms to reach!  The landlady was a traditional brilliant local crone and the OTT jam jars were probably the only irritating thing, save for a bit of weird leather sofaness at the front.  It was the kinda pub you could lie across some bench seating and noisily eat your own pies without the pub caring, which is what we did.  We'd gone from Barrowby to the Harrowby, and it rhymed.  Again, it had 3 locals.  The young lady was complaining about her dog doing this strange bark in the night, which she'd been googling.  She was debating having the poor thing put to sleep, trying to pass it off as 'the dog's getting old' but it was more a case of 'it's annoying me so I want it dead'.  Even the unshockable hi-vis man, sat with her at the bar, seemed shocked.  Though he made up for it by telling an improbable tale about the time he set a rat on a spider in his bathroom.  No wonder customer number 3, Mr Moustache. who has been out of fashion since 1984 left in a hurry, too much animal cruelty for one bloke.


So that had been two great pubs, it was now back towards Grantham centre for the remaining three.  Things were about to get weirder, so join my for that write up on Wednesday evening.

I'm off the debate the cruelty of an FA Cup draw which has pitted Hull City away to Chelsea on a day when I'm supposed to be finishing Bucks.  So I have London train tickets.  So I should go.  Or should I?  Arrrghh why couldn't we have been at home then I'd have no decision to make!  Maybe it'll be moved to a Sunday or something.