BRAPA - A Bolt-on from the Blue 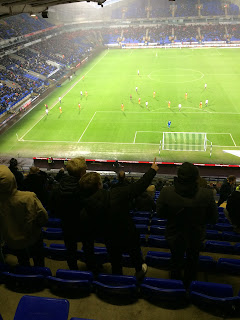 You have to go all the way back to 2003 to find a time when I last went to a new New Year's Day pub that has counted towards my 'BRAPA' tally.  That was in Bury.

Not far away in Bolton, 15 years to the day, the same brand of New Year's litter was blown around by the same bitter wind.  We had the same type of fruitless walk to pub(s) that should have opened 11am but being NYD, was shut.  And Hull City provided the same level of inept performance (just two divisions higher), resulting in the same 0-1 outcome.  It's reassuring how little life changes isn't it?

We passed a 'Bob Inn' and after 5 seconds of temporary Chorley-esque excitement, Tom spotted it was keg only, not a good pre-emptive, so didn't go in.  The 'other' market was open, and seemingly so was 'Great Ale at the Vaults', after all, there were two staff behind the bar.  But when we quizzed the barmaid on opening time, she said "errm not til one .... errrrm, half twelve?  errrm ..." If we'd stayed and quizzed her further, we might've got her down to 'we're open now'!

Churchgate was a funny pedestrianised street.  If you've ever been to Coventry, firstly, you have my sympathies.  Secondly, it's Bolton's equivalent of Spon Street.  Everything is "Ye Olde Somethinge" to the point of feeling forced historic, shame cos there was a famous Civil War execution here I read so really no need to hit you over the head with it!  York would never do that(!!)

A strange young woman with a gap in her teeth saw Tom peering into the closed Olde Man & Scythe, our other "required tick", and helpfully told us 'Hogarths' down the road was open.  It did cask beer amongst it's gins, so we went in.  Less than 12 hours earlier, I'd written "Pre-emptive pubs are overrated nonsense", so of course, my 2018 pub ticking began in one!

And you can't tell me this doesn't have GBG potential.  It was warm.  We had a friendly welcome, "Happy New Year" squealed a barmaid from beyond, before a decent young bald bloke (bald men always seem to make the best bar staff, more streamlined to serve you quicker?) served from about 4 ales, and yes my 'House Beer' was a bit warm due to the old 'first pulled through of the day' problem, but it was tasty in a 'broken your tooth and swallowed some hoppy blood' kind of way.  Some nice Hogarthian (if that's a word) murals on the way back from the loos and Dad & Tom had found a comfy corner booth and all was well with the world.  So I was a bit surprised to see our gap toothed friend, sat with us, nursing half a Fosters.  She was a nice lass, but had probably had a difficult life, you could surmise.  She was from Hartlepool, didn't like the locals calling her a Geordie cos she'd been here 10 years, so I gently told her she was a monkey hanger (I say the sweetest things) and we told her about our football trips, visits to 'Pool, BRAPA etc.  which confused her but she tried to keep up.   Her fave Hartlepool drinking place is called "Loons" or something and is half disco, so probably doesn't have BRAPA potential.  Still, Reading's Purple Turtle got in the GBG so you can never tell.  Even the sun came out for the only time today, shining in her eyes so Dad advised her to move round the corner cos "there's nothing worse than having the sun in your eyes!" but she's probably experienced worse in her life.  It had gone 12 noon, so we said farewell, raised an imaginary pint of Camerons and hoped the two BRAPA pubs had now opened.


After passing the Olde Pastie Shoppe, the Olde Musicy Shoppe, and the Olde Twilde Sanctuarye (probably), we reached the pub again and were glad to see it open .....

I normally scoff at claims like 'fourth oldest pub in the country' and 1251, but this pub actually did feel PROPERLY ancient in a way only a handful I've ever been to have.  The friendly barmaid/landlady who might well have been here since it was built (that's supposed to be a compliment but doesn't sound like one) served us jolly ales in the main bar, and the pub opened out into a multi-roomed warren (always the best).  Perhaps a roaring fire, more enjoyable beer and a bit more comfort, and this could have been wonderful, but it strangely fell a bit short for me.  And this was despite her putting tasty pasties into the oven (I didn't brave the cheese n jalapeno, but by 16:30, was wishing I had!) but as Tom said, they had 'some version of dead animal' ones.  Flippin vegetarians!  I had meat n potato cos I'm a dude.  And back to the beer, and it could've been me.  I had a greasy film (not staring John Travolta) in my mouth all day - too much New Year's Party food and Bucks Fizz?  But neither beer I had was enjoyable, but don't wanna criticise pub in case it was my knackered palette!  Great pub, but didn't quite seem as brilliant as I'd have expected on entry. 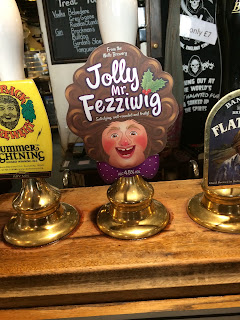 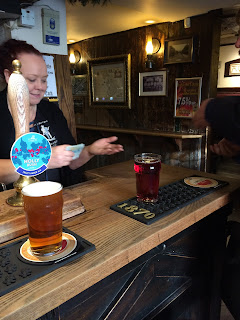 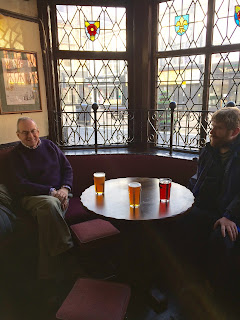 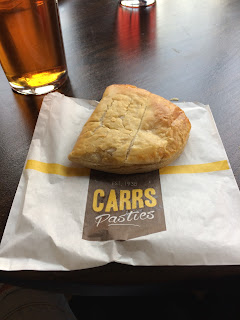 Back to the soulless indoor modern market then, down the escalator, and the pub of uncertain opening time was open as predicted: 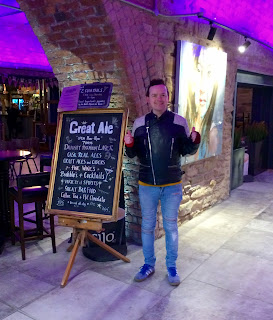 It couldn't have been much more different from the Olde Man & Scythe, and although I like to champion 'proper' pubs, and all my pre-conceptions were telling me to 'hate' this and 'love' the Scythe, I ended up preferring this Vaults bollocks!  How is that possible?  Well the same vague barmaid was now helpful and friendly, "your beer is supposed to be cloudy" she told me, I nearly used the word "unfined" but didn't wanna sound like a Twamra Bloke so tried to look like a wide-eyed Carling drinker who was ordering his first ever real ale.  It seemed politer that way.  It was very nice but again, wayyyy too warm.  In fact, about the same temperature as my tepid coffee on the way back from Piccadilly later on!  But this was the only time today my bones felt relaxed and comfy, and that's such a key point, jeez I'm getting old.  Going to the loo was less fun, miles away other side of shopping centre, where a Twild and Dad played football, I was tripped, a certain penalty, but I was booked for diving, can you believe?  The clincher came when Dad went back to the bar (we'd resigned ourselves to the latest train to the Macron Stadium possible by now) and asked after the mince pies.  Were they well?  They were free, and she said we could take as many as we wanted, and my beer was cooler!  Best BRAPA moment of the year so far, am I easily pleased, well I don't care?!  Should we have stayed & missed the dreadful football like Tom did?  With hindsight, yes.


So yes, we just about got into the ground for kick off, it was terrible (sorry, I keep saying that), but at least the 'Mansfields' (our back row friends from Suffolk) and the 'Gooligans' were on good form, we learnt this new chant about our team:

We are getting relegated, of that I have no doubt.  But League One will have good BRAPA potential so who's the real winner?  Right, am off to have a cry before bed.