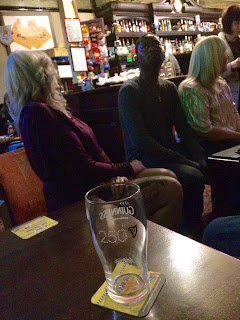 Every time I combine BRAPA with a football match this season, I seem to be telling you Hull City have hit a 'new low'.

So if I told you on Saturday, Hull City hit a 'new low', I hope you believe me.


Sunderland were a poor side bereft of confidence as you'd expect, but we were dreadful and they picked some lively kids, scored a good goal and fully deserved the win.  At the end, I chanted "you're not fit to wear the shirt" to the players who were the passionless equivalent of an Ember Inn in Maidenhead with the brain power of the people who managed the now defunct Hope in Richmond.

But our owners are to blame more than the manager and players by a million miles.  Killing our club.  It is so sad.  I was sooooo depressed (for a few minutes).

But as Steve Bruce (god rest his large soul) would say, it was time to "dust worselves down" and find post match BRAPA pubs.  He'd actually favour a kebab and a Guinness with Big Sam.

Tom pretended he knew where the Metro station was, and when he fluked his way into the queue (Tom will tell you he knew it was near the giant Tesco so just had to aim for that), we had a bit of a wait with several jolly Mackems and squeezed on the next one.

It didn't stop at Sunderland itself for reasons too boring to remember, and Dad decided he didn't quite have enough time to get off at Felling and join us.  "Why ya gerrin off at Felling lads?" said a jolly group who'd overheard us, "yous are brave, it's proppa rough like" and everyone said "aye" and "marras" and "canny" and stuff as we said bye to Dad & our new friends and skidded down the ramp, avoiding any flashpoints.  Well, it was deserted.

And as we rounded the corner, pub looked pitch black.  Uh oh we both thought, it's closed!  I'd been here before on a Bank Holiday to find it closed, but on closer inspection, a small green glow was emanating from within ........ phew!

The green glow was a small TV screen in the far corner showing local 'heroes' Newcastle Utd getting rings ran around them at Man City.  The rest of the pub was pitch black, well no point wasting electricity is there?  Perhaps ironical in the circs, all the ales came from the wonderful Big Lamp local brewery.  My Prince Bishop (SBS A-) was perhaps pint of the day.  There were filled rolls and chocolate bars on the bar, Tom swooped for a cheese n onion roll and we sat under the TV, just as reception was failing.  Which should have been a relief to any Mags watching!  Two men fiddled around with reception for an age, even phoning the local TV expert/owner to give emergency over the phone instructions in the dark.  It was all very exciting.  The pub was wonderful, reminiscent of one in the West Midlands we both agreed, outdoor gents as you'd expect in a place like this, and eventually they put a light on (booo) and a jolly babe sat near us with her 'eclectic' friends (remember the CAMRA code, that word means some were not male, white, bearded and over 60).  She thought she'd scared us off but we were on our way any way.  Pub of the day, easily,  All cheered up again!

We rejoined the Metro to Newcastle, where we walked down to the Quayside for the final BRAPA tick of the day, and my final pub in Newcastle in the current GBG. 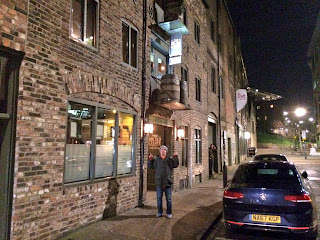 The outside photo gives you an idea of what lay within, a bustling bright bar with restaurant area and plenty of over privileged middle class middle aged Geordies with their faces in the nose bag.  It smelt of food, mainly fish, and the sound of rattling cuttlery and champagne corks popping rang around the building.  The upside of this difficult start was the house ale, recommended to me as the ONE reason I should come here by someone on my blog a while back, Wylam Writer's Block simply fantastic (SBS A-) giving the Big Lamp a run for it's money.  Undeterred in our quest for a seat against all the odds, Tom did well to get his arse and bag between a grey pointed oldie and some raucous scroats, and we squeezed into the area.  We sat in silence for a bit, and Tom said what we both were thinking .... "I should hate this place, but it's kind of alright".  Not sure why, but very true.  How I cannot describe.  Especially when a drunken man who looked like a homeless Gazza sat on my knee on his way back to his seat, and was told off by his fellow drinkers for not giving us enough personal space(!) but they left soon after anyway.  A man in the loo saw my City shirt, he was a Sunderland fan (course he bloody was!) but hadn't been today because he was babysitting his neighbour's poorly rabbit - I think that's what he said, the hand dryer was loud) and he seemed a canny lad all the same.  Weird kinda place, but you might want to go during the day if you are planning following in my footsteps for a Wainwright-esque BRAPA documentary when I'm dead.

We weren't doing bad for time and I'd spied a pre-emptive across the road from Newcastle station, so we popped in for a swift half.

What with Head of Steam, Centurion, the 'Vomit' and that big Wetherspoons, you have to wonder how many pubs Newcastle needs within a 30 second radius of the station but Jimmy Five Bellies and his mates won't be denied.  And the Pivovar owner bloke told me about this place too so time to pop in to see what was all the fuss about.  Well, hard to form an impression really, very yellow, three deep at the bar, young clientele with no spatial awareness, staff a bit slow, one of those 'cask beers' up here, 'keg beers' over there tiny blackboard tap affairs designed to confuse your average Twamra.  I got a nice half from somewhere good, it tasted of ale, me and Tom stood in the middle and chatted.  Wouldn't mind giving it another chance, but it didn't feel as characterful as York or Sheffield's equivalent, but maybe if you get a seat and explore, it might be better.  Or not!


Me and Tom took the 20:43 fairly trouble free thanks to Tom's uncanny knack for getting in the best coach.  Back in York , I said bye as he was off to Donny to restore his misery quota for the night and popped into York Tap which was spookily deserted for 10pm on a Saturday, I blame the Dryanuary scum.  Someone might have weed on the floor next to me, a barman looked like he was going to hit me with a stool (not a poo), and the regular 'three quarter length shorts' beard was in looking like he owned the place.  His legs haunted me with their paleness. 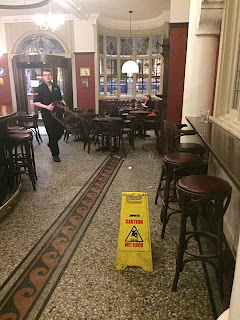 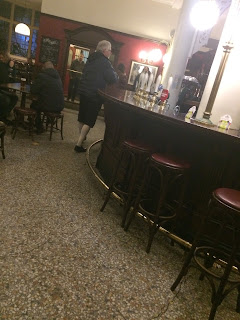 It livened up a bit and a young man (a Twhat) tried to steal my hat.  "He's been doing that to people all day" said his very tired looking friend, and made him give it back, so it was fish & chips and home at the end of a great day.

Like Central London, only SIX more Tyne & Wear pubs to be had so again, should be a completed county before 2019 GBG comes out and then I don't have to worry about it for a few years.

It's not been a vintage BRAPA month by any means, but I'm planning a Fri pub trip, and the aim is still 25 minimum by month end with Dad's mystery birthday trip on Saturday.