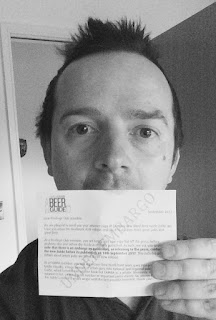 "The embargo is over, there's a bunch of demons in my head" as a Norwegian folk-punk band once (nearly) sang.

As you have probably been able to tell from recent posts, cross-ticking hasn't been kind to poor fragile downtrodden BRAPA.

Below is my slightly self indulgent strategic ramble on the subject.  The headings could be titles from my debut punk rock album, "Never Mind the Balloch House Hotel" (12 songs coming in at 19 minutes and 4 seconds long, tell me your favourite track).

1. The Figures of Doom

So was I unlucky, or do I just need to find ways to do BRAPA "better"?  Maybe a bit of both.

I'm not sure who would do the following analysis (even I'm not this sad) but I wouldn't mind betting that the 2017 to 2018 turnover of pubs is higher than ever.  And one reason for this, and one that is obvious from scanning the new book, is this growth of the micropub.

Don't get me wrong, there are some great examples of micropubs out there and I went to two in August alone (Grocers in Cadishead, Chiverton Tap in Cheadle Hulme) and though they can be entertaining, I'm gradually getting the feeling (as twitterers have said already) that 'opening a micropub' is one of those fly-by-night 'latest crazes' of the semi-retired bloke/couple.

If the 'Good Life' was set in 2017, Tom and Barbara would have strangled the chickens and sacrificed the pigs at the expense of putting two handpumps in a whitewashed former chippie.

Opening hours often bear out the perceived lack of commitment, leaving a "pub ticker" like me skeptical as to the longevity of such places.  After all, why should I tick a Micropub in the 2018 GBG if it is going to be dust and rubble (or an Aldi Express) by 2022?

I've read about one in Birmingham that opens for 13 hours a week.  5-9 Friday, 12-9 Saturday.  The GBG entry is three lines long and reads like even the local CAMRA haven't been able to form an impression of it.  We feel here at BRAPA Towers that CAMRA could bring in a "minimum hours" rule for GBG admission, though I guess this could be controversial for some of those ancient country pubs run by immobile 91 year olds (if they still exist).

But it'd be too easy to blame the emergence of the micropub alone for my poor numbers this year.

I've spent the last fortnight working out how I can make BRAPA more productive.

One idea, slightly relating to the micropub conundrum above, and this has been in my mind since a Hull CAMRA chap suggested it back in 2015, is to focus on those entries that get in the GBG year after year.  Much easier to say in theory than to do in practice, of course.  But when there is a toss-up between two or three, for example, I'm in Central London 7pm, last pub of the day, I've got to think "Right, this is a pub I've seen from flicking through past GBG's for ages now, get this done, and leave the 'Mirth, Marvel & Maud' for a year or two, see if it has staying power."

Pubs like "Royal Oak (Th' Heights) in Delph and the Tandle Tandle Tandle Tav may be hard to get to, but 25 consecutive years or whatever means they should be a rewarding visit in more ways than one.

Too many times in the 2016/17 'season' saw me happy to spend the last two hours of a post Berkshire or Buckinghamshire day 'relaxing' in Scottish Stores and Parcel Yard when I should be tooling around Covent Garden or Leicester Square.  This has to change.  I must aim for SIX each Saturday.  If you are out for a full day, it isn't much of an ask!

I've become increasingly annoyed with my own "letter of the law" mentality around doing the GBG in some kind of alphabetical order.  Especially now that I really need a 12 months of morale boosting numbers.

Cumbria is such an unfriendly BRAPA county, I think I'd be best off focusing on completing the likes of Lancs. Greater Manchester and Merseyside once Cheshire is done.  Midlands (both East and West, must be easier too).  Cambs is still on in the South once Bucks done.  And I can still do the alphabet within the county to sate my ABC/OCD needs.

Those further flung things can be my "week long specials" when I have time off work.  Oh to be a RetiredSimon!  Or a lottery winner.  I might just live as a hermit in Bristol for a year, no one would notice.

Not even my pre-emptive ticks really bore much fruit this year compared with previous years.  I know Middlesbrough has quite an array of micropubs now, yet it is still only two ('starring' Dr Phil's) which gets in.  Scottish Stores didn't get in for London.  Surprising.  Hops n Cheese Hartlepool, Draft House Milton Keynes, Gun Bar, Saltburn, Weighton Whippet, Market Weighton.  I was confident on all of these.  Maybe too new?  I think only York's Brew York Tap Room (which I really wasn't expecting) and Wath-upon-Dearne's Wath Tap (another excellent Micro I might add) made it.

The recently visited Draft House Seething at Tower Hill has dropped out.  No surprise there, I must say my pint wasn't up to much, yet it features on the front cover for heaven's sake!

Even taking local knowledge from real ale fans in their own counties didn't work in my favour this year.

Take Boxing Day in Lincs.  "Oh, come and meet us in the Barrow Haven", she said.  DE-GUIDED.  And once in Barton, "oh don't worry about the George, it won't be in next year".  But it is!

Similar thing a week later in West Brom.  "Ah, you don't wanna go to the Crown & Cushion" he says, "let me show you the wonderful Wheatsheaf instead!"  Guess which one made the GBG and which didn't?  Even the fantastic boxing bloke pub in Tipton's gone.  It was brilliant!

I don't mean to criticise - both these days were so good, I enjoyed the pubs I went in, the chatter, the people, and in the long term, it may still end up being good advice if it all swings around in 2019.

And that's when you start questioning the whole damn thing!  I'm enjoying my days out going to new pubs, having new experiences, I wouldn't swap this life for anything, so at the end of the day, how bothered will I be when I drop down dead and I've only done 3,677 pubs.  Will I care?  Course I fucking won't.  I'm fucking dead.

I finished Yorkshire, I'm not bothered about replenishing my numbers (I keep saying ad-nauseaum whilst fervently doing West Yorks and South Yorks on Tuesday nights, well, it's cheaper and easier ticks than the Greater Manchester pubs I have been on).

But North Yorkshire can absolutely get knotted!  30 pubs I dropped.  And when I count, actually only 21 still to do.  Huh?  So have they been given 9 less pubs in the allocation then?  Bizarre.  (Or I miscounted something last year!)

Greater Manchester wasn't much bloody better with 21 pubs lost, but here I get the impression there's a real competitiveness in terms of getting in the GBG, and a real contrast between old and new (though Altrincham's entries get more modern and shit by the year, or so it looks on the surface).  Has the Old Market Tavern really gone downhill to the extent it can't get in, yet Jack in the Box can?  Hard to believe, but (a) I'm just a one off visitor and (b) it is a good BEER guide so perhaps so.  But the town may as well rename itself Alty-SCum-Hardy.

10. Father's Theory of the Overall Number of Everything / Sanity Test

BRAPA legend Bernard "Chauffeur" Daddy Everitt has been badgering me for a while to build up an "overall" figure of GBG pubs visited past and present.  I'm nearly up with it.  I will start using this number alongside my current GBG total, writing this one on the BRAPA card I leave in the pub, and then I can feel I'm always progressing, which I need when I've just gone backwards like right now!  That number is about 1825 at present but no doubt a few are missing.

And despite all the bad news with the cross-ticking, I've identified ten or eleven pubs (TBC) which have made it into the 2018 GBG and I've visited, but have never reviewed before.  This is because they were either visited before BRAPA started and haven't been in 2014-17 GBG's, or because I never treated them as a 'pre-emptive', so now I need to write a little review of each one, which I'll do in the next week or two so watch out for that.  York Beer Festival next week will slow me down!

We'll end on a high.  This might be officially day one of carrying my new GBG around with me but I can happily report it has magically lost approx 360 pages of it's 1,032 page total (that's like a third or something mad), and is now comfortably manageable in one hand if you wanna walk around the Buckinghamshire countryside swinging it around your ears or batting twild and twog life out of your way in a Surrey dining pub.

Phew, well that was rambling and painful wasn't it!  Therapeutic though,  Thanks for reading/skimming it.