BRAPA - A Master in my Own Shields

"Any pubs visited in this blog should be viewed as merely 'pre-emptive', and any similarity to pubs listed in the forthcoming 2018 Good Beer Guide is purely co-incidental." 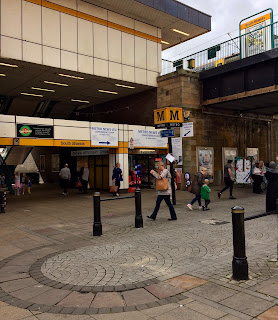 South Shields.  Let's take a moment to contemplate.  Horrible isn't it?  Not helped by an incident almost 3 years ago to the day, where I took my brand new 2015 GBG for it's first ever outing here.  I accidentally bought the wrong Metro ticket, was fined, made to disclose my height, hair, eye colour etc. and even worse, the local methadone scroats outside the station looked at me like "haddaway Si lad, get yerself a proper ticket in the future."

So it was a moment of pure relief, a real 'monkey off the back moment' when I walked effortlessly through South Shields station barriers onto the main street in town at 11am on Bank Holiday Monday.

I'm aware this is a long intro but let's for a second talk about the perils of "pub-ticking" on a Bank Holiday.  Of course, you cannot rely on bus services even if trains are just about good enough.  The real problem is 'pub opening times', always the bane of any 'pub tickers' life.

The naive 2014 me thought you could simply treat it as Sunday opening hours, and that was that.  But I soon learned that publicans like to enjoy their rare rest days just like anyone else, so if say, Sunday hours are listed 12-11 but Monday hours are listed 5-11, you can bet 60% won't open til after 5pm on a Bank Holiday.  Then they'll stick half a head around a latched door and say "ho ho, well it is Monday strictly speaking!" which is no consolation.

Time to put it to the test in 'Shields.  One of the many reasons I love the North East is the dedication to long pub opening hours, for when the folk of 'Shields aren't shooting up or dancing on the sand (that's how Phil Brown really got his tan, it is golden sand stains), they like a good pint.  The two pubs I needed, 'Marine' and 'Alum Ale House' (which sounds strangely like a Hull City owners dream pub duo), both apparently open 12 noon Sunday but 11am on Mondays (rare itself).  It was just gone 11.

I walked to the river and ferry landing where the Alum was situated, but closed.  (Last time I came to Shields, it was closed for a refurb).  Observing their Sunday hours then, conveniently,  as a man in lycra hopped out of a car and carried boxes into the pub, signs of life at least.

I hot-footed it across town, past 5 consecutive Indian restaurants on a street teeming with food outlets, it was just gone 11:30am but hey presto, Marine was open!  Observing Monday hours.  Proof you just can't call it...... 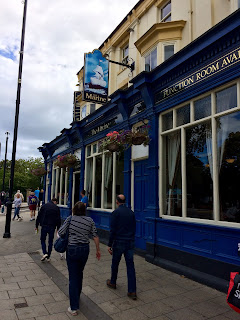 Spacious and loungey, carpets, bench seating, this pub was a relaxing haven from the hustle and bustle of the outside.  A barman who looked like a friendly Viking warlord looked so surprised when I eyed up the ales, he thrust a loyalty card in my direction, and too intimidated of his full ginger beard to tell him I was the least loyal pub goer in the U.K., that I politely listened to him explain how it worked (you get a stamp for each pint you buy, and at the next full moon, you get a free one - or something).   A freaky song came on called 'Boris the Spider' which sent the pub into a frenzy, and with recent BRAPA insect related trauma (the bitey thing in York Tap, the fusebox spider on AGM day), this felt a bit too close to the bone.  Luckily, a local complained so I didn't have to.  As the music gave way to the more conventional 'Waterloo Sunset', an old John Smith's drinker and his wine loving wife sat just a little bit too close considering the amount of room available, as Martin Taylor asked for South Yorkshire info in the new GBG which hadn't reached Cambridge due to the new warehouse being in Goole, so we believe.  My pint was called 'Strawberries and Cream', I thought it'd be sweet and dreadful, Tyne Bank are funny like that, but it went down a treat. 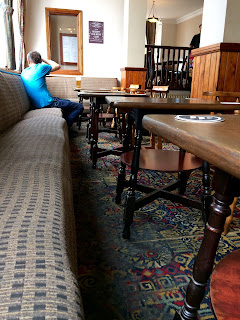 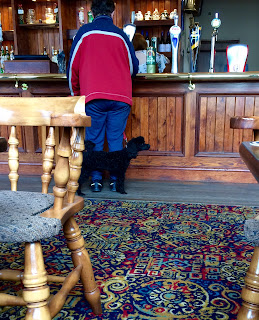 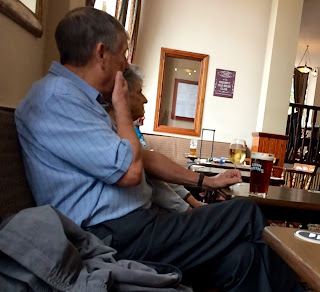 I wandered back through town, past the Metro, told some Jehovah's Witnesses I had an urgent pub to get to, it was now gone 12 noon and the pub was suddenly a mass of high energy...... 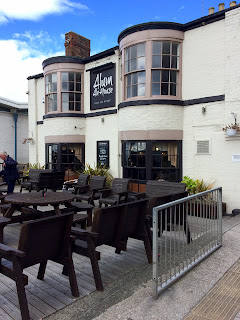 Just out of shot to the right, a chirpy busy barmaid was cleaning tables but being distracted by a man with a grey ponytail, which blew wildly in the coastal air.  He kept making a groaning noise, and when I accidentally made eye contact, I felt scared so wandered in.   ELEVEN ales were on, nearly all Marston's standards but you have to say, as Marston's pubs go, this was one of the ultimate best with beautiful old shiny wood, nods to local history on the walls, low ceilings and some delightful dark rooms to the right.  My instinct was to sit in one of these, but a character at the bar with a big grin and a t-shirt that read "I'm not an alcoholic but.... <insert funny slogan here>" looked like he might be GBV (Good BRAPA Value).  Annoyingly, he necked his pint in one, belying his t-shirt, and headed off after saying bye to the whole pub.  The soundtrack here was 'The Sea' by Morcheeba (something about seagulls stealing ice-cream), which seemed fitting as I could just about see it over my left shoulder.  My beer (61 Deep) was poor, just tasted like hoppy water, seemed a bit hazy but smelt ok, and with the lack of anything remotely interesting happening, I started to resent being here so got out the ole' Green Highlighter and coloured in as much of Tyne & Wear as one man can in a 27.5 minute spell! 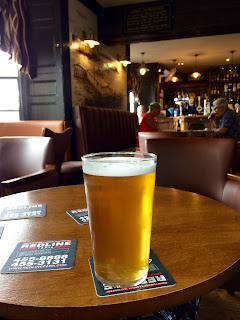 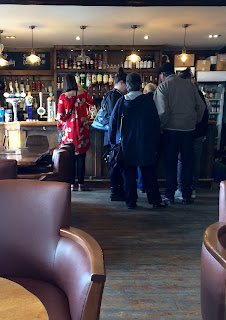 As I walked back to the Metro, I realised how hungry I was and with the fish & chips queue snaking outside the door, I had the choice of the following two quality eateries: 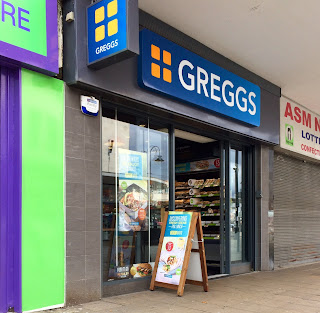 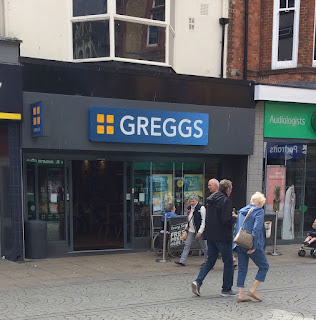 Guess which one I chose?  Anyway, a Steak & Cheese bake sorted me out.  Back on the Metro, a student girl pronounced Jarrow as 'Jarrow' like 'Harrow' but even I know it's 'Jarra', so I downloaded the Jarrow Song by Crashed Out onto my phone to get me psyched up for the next pub.  Altogether now "My name is little Chrissy Wright, I know what's wrong and I know what's right...." (quality, you don't get Leonard Cohen writing lyrics like that!)

Sadly for Jarra, it was a bit of a ghost town even on a Bank Holiday, with a slightly better breed of addicts than in South Shields...... 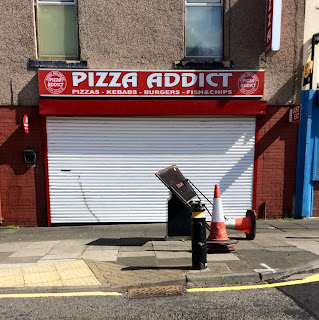 My pub was in the kind of location you'd never expect to see a pub, as though you were walking into a housing estate ...... 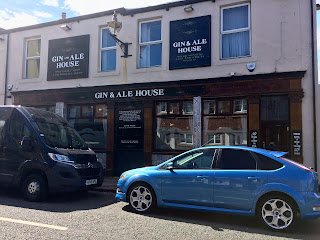 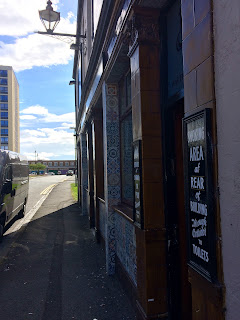 It was one of those 'pub turns to stare' as I walked in, so I smiled nervously as a couple of the old blokes nodded and half said "alright lad" out of the corner of their collective mouth,  A spindly blonde bar girl greeted me, and a moment of high tension as I scanned the beers and ordered a 'Jarrow Golden' as "Jarra Gawldern" and the pub breathed and carried on.  And when I say carried on, they seemed to be rattling some mini dominoes or something that could be played on a bar counter rather than at a table.  The pub was wonderful, the outside had nice tiling and inside was all wood panels, deep red carpets, with a ridiculously close atmosphere, the kind which'd make my Dad go for one his legendary 5 minute walks outside.  It felt like no new oxygen had entered this pub in the past century, and I loved it, even though it was the most sleep inducing pub atmos ever.  If this wasn't enough, the floor was the spongiest EVER, I felt stoned.  The loos had a snooker theme and the kind of pub smell you've not smelt since the 1990's.    The beer needlessly to say was of the very highest quality, and a bit of Everything but the Girl and Natalie Imbruglia topped it off nicely(!) 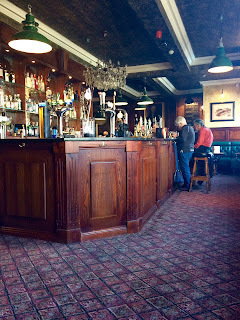 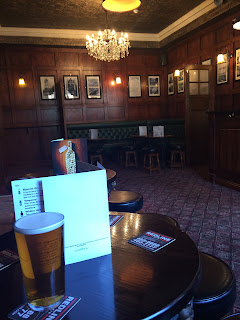 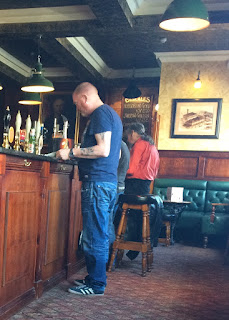 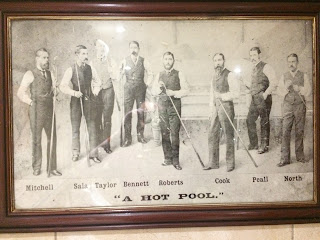 Buoyed by such a great pub, I decided to run the risk of seeing whether or not the pub at Felling, a couple of stops further on, was open.  It was back to the old Bank Holiday conundrum.  This had Sunday opening hours of 12 noon, but 5pm on a Monday.  It was approaching 3pm. 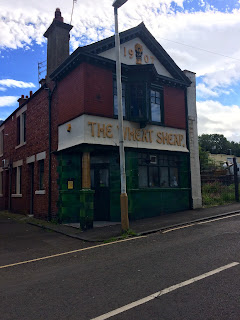 Looked nice enough, but a dead as a doornail!  Observing Monday hours then, well of course, it means they get the daytime off don't they?  I'll be back, as I want to finish Tyne & Wear in my 2017/18 'season'.

All was not yet lost, back in the 'Toon,  a pub just across the road from Newcastle station .... 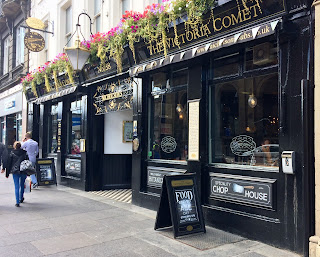 So, the furthest north Nicholson's in the country (by default someone told me cos the Edinburgh one shut down), not my favourite chain by any means (the 4 in York are 'reasonable' on a good day), but no Ember Inns.  Wonder if I'm the only one to call it 'the Vomit', I was impressed by the cheery barstaff but lurking outside and in the doorway, all smiles and hellos when I ordered my fairly limp Hadrian and Border ale.  Barman was particularly good, a Scotsman with those piercing slightly desperate blue eyes which were uncannily David Moyes, probably a hero in Newcastle if you see what I mean.  "Alright pal, can you fill in for Khazri" he seemed to say, no wonder I dropped my change on the floor.  The pub seemed to be a series of grand partitioned raised leather benches, sounds quite a nice layout if you are in a group or want some privacy, but I just felt so closed off from everything, not good for a pub observer.  Especially as I'd identified a highly excitable bunch of Geordies across from me, who all said hi when they went to the loo, perhaps wondering why I was photographing them!   Otherwise, all I could do was observe Newcy Brown Ale and football memorabilia behind a glass case, which was interesting for 5 seconds.


The train back was amusing because a young guy excitably pulled the cellophane wrapping off some women's mag called 'Reveal' and got properly engrossed in it.  I was back in York just in time for 17:30pm Neighbours, phew!

Tomorrow, I'll release my blog of Saturday's latest trip to Bucks so stay focussed, we can't let this huge loss in GBG numbers get us down.  Plenty to do until 14th Sept to try and bring it back up to something approaching respectability.