"Any pubs visited in this blog should be viewed as merely 'pre-emptive', and any similarity to pubs listed in the forthcoming 2018 Good Beer Guide is purely co-incidental."

Our tiny "Static Data" team at work had been suggesting some casual after work drinks for a few weeks, when I innocently flicked my hair over my ears and said "how about this place I've heard about called Wapentake on Kirkgate?"  Cue confused expressions, of course I couldn't tell them this pub was on a list given to me by a ghostly Dick Turpin in my local Sainsburys.

It was something of a "leaving do" for me (in the loosest sense of the word) in that I'm going back to my old team soon, all of one row of desks away, and it was a chance to give BRAPA debuts to some really ace work friends.

These were, in no particular order, Dave (Rotherham Utd fan, Oasis tribute act superstar, proper good no nonsense South Yorkshire lager drinker),  Rocio (feisty jolly Spanish Saltaire lass who used to work for Real Madrid TV pre-Yorkshire Bank when she swapped Gareth Bale for Si & ale), Deborah (caring sensitive cautious 'mother of the group' with outer Wakefield leanings), Alistair (the new young lad, agency staff and my trainee with links to Crowle and Pembroke - makes him sound like a Crimewatch photofit)   and last but not least, Katie B (think Marilyn Monroe with less organisation but totally amusing and heart of gold).  Katie was late as she was going to a wedding in Majorca next day and was flapping like a flapper, doing last minute shopping.

So we wandered in to this cosy, intimate, some might say tiny, bar with that modern L**ds whiff to it.  Me and Al immediately spotted the 'pub character' of note, and we weren't fans as he, sat at the left edge of the bar doing the crossword with his suit, t-shirt- jeans, and ruddy complexion, decided to stare us all up and down in a less than impressed way.  He was either the owner, or the local alki, or both, but he made us uncomfortable.  His eyes particularly bored into my back when Deborah asked me to run through the real ale selection and I said it was amusing how a pub which prides itself so much on 'local produce' should have Sharp's Atlantic as it's regular ale.  Not sure how we got onto the ale subject anyway, she was always gonna be on the gin, Dave banged in 4 pints of Carling which surprised no one present, and Al was on the Blue Moon with a bit of orange needlessly floating in it.  Rocio was on the ale with me, and Katie seemed to order a fishbowl of Pinot Grigio for herself when she arrived.  I asked how you pronounce "Wapentake" but even the staff didn't know, given me 4 alternatives, the final was my own pronunciation "Wappen-takkie".  The bloke who served me was very familiar, having served me in every pub in L**ds over the last 10 years, and the barmaid Tiger-Lily, pretty upsetting name but both of them had first class staff attitude.   I was invited to "open a tab", good news as I was about to pay for the round (!) though we then spent next 10 mins explaining "opening a tab" concept to Rocio.  We sat upstairs (some very steep steps) where the only free table was, supposedly a bit of a sports bar but even a blind man could see that this was the least appropriate pub to have cricket on a giant screen that you could hope to see.  You mention a 'googly' or 'silly mid off' to the clientele here, they'd probably think it was social media slang.  Dave was originally sat on a high stool at our low table, but the staff showed more class by immediately rectifying the situation.  It was a nice couple of hours chat and letting off steam, good one to add to the 'work night out' list but perhaps at quieter times.  I went down to pay the bill, the rest walked past me and left, citing the need for trains and buses as a matter of urgency.  So I paid and went back upstairs to finish my pint - normal BRAPA service resumed.  Two excitable blokes with drawn on beards sat opposite me, and wanted to talk football - they were Liverpool fans, I told them about Slutsky and Hull City  With hindsight, am surprised the table number wasn't 5-0.  Burton fans probably showed up later.


When I set off to work the following morning, I honestly wasn't planning on going to Derby to watch Hull City, I only just found out it'd be moved to Fri Night for TV.  But the more I looked into it, the more it made sense.  I could get there and back comfortably on the night, £17 pay on the gate match ticket, Derby down to two reserve midfielders.  It was too good an opportunity to pass up, wasn't it?!

After a couple of train beers, I decided walking to my 2 remaining BRAPA pubs at 6pm was just a bit too much, so took the opportunity to do celebrated Derby pub of the year The Brunswick properly, having only sat in the upstairs function room before with more limited ale, to avoid men from Goole. 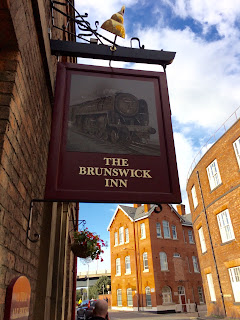 You could see the appeal straight away, with multi roomed layout hidden behind glass doors.  Sadly, the staff didn't look like they had it in them to cope with an increasingly busy football crowd and the locals were 'typically East Midlands' i.e. stand offish and a bit insular (from my experience, particularly Derby and Leicester).  I did get a fantastic seat to observe the locals, particularly some CAMRA woodland folk including Ram Gandalf and a couple of hobbits who'd escaped from 1971 Glastonbury. 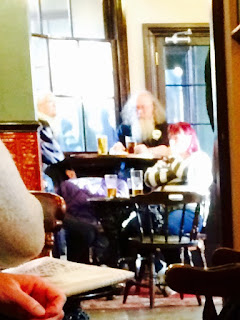 I was impressed with the ales, they had their own brewery I think and I had this railway porter.  Not sure if familiarity breeds contempt but the group opposite me insisted on making a show of how, as far as they were concerned, it was a toss up between Everards Tiger and Tim Taylor Landlord.  Almost like they refused to acknowledge the existence of Brunswick Ales.  Inverted snobbery?  I'd seen enough anyway and I had a back up plan.

Ah yes, on my previous visit here (a Tuesday night in April '16), me and Dad popped into the Alexandra for post match pint to lick our wounds after a 4-0 defeat.  It was a cracking atmosphere (course it was, they'd bloody thumped us!) and despite wearing the only Hull City shirt in the pub, we got chatting with loads of great locals about Derbyshire pubbing and the pain of defeat soon passed.

Today was no exception, more limited in terms of space and I was being served by a lovely young lass on her first shift here, very apologetic for everything, for no reason, great ales, 'filled cheese n onion rolls' behind the bar - much needed as I'd had no tea, and soon I was perched in a corner chatting to two random Rams - why can't every Derby pub be so welcoming?  Only the Rowditch and the Horse & Groom have come anywhere near close.  Well, I laughed as we all agreed "at least it won't be 4-0 again tonight!"  and by gum weren't we right? 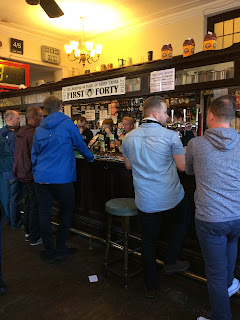 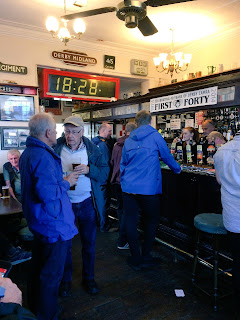 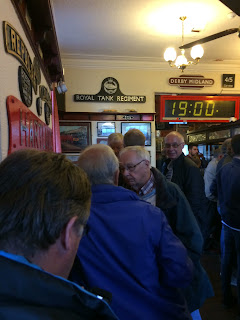 After 45 minutes of some of most appalling football I've ever seen from City (I know I say this every time but it seemed more true), I took the advice from the likes of Dad, Ben, Mark, Christine and even a couple of work people, to abscond early and head back to the Alex.  After all, we weren't gonna win 5-4 as some teenage lads excitably told me at the burger van, and what with an early start to Southport, such a move would mean I could get home midnight instead of 2am.  Every cloud n all that!

It was a swift but very enjoyable pint, despite my lack of black n amber, my contorted face told the whole pub that I was a Hull City fan who'd left at half time, I didn't need to say anything.