BRAPA - At The Sign of the Bay Horse, Oxenhope

Last time I found myself on a Bronte Express leaving Keighley's bus station, I was off to Stanbury in the depths of January with only Kate Bush and Emily Bronte's ghost for company.  Today, it was choc-a-bloc and I'd had to tell a dithery old lady "Oi pal, get to the back of the queue" after she tried to use her advancing years, walking stick and poor eyesight to gain an unfair advantage.

The bus driver didn't seem to like me.  He was busy shovelling a Greggs pasty into his sallow face, and being the only customer under the age of 95, I was the only one who wanted to buy a ticket.

It wasn't long until we were shrouded in an ethereal mist, cloaking the hills around the pretty little village of Oxenhope, which added atmosphere and excitement to my impending pub trip.  I had been to Oxenhope before, summer 2012, to step off the train briefly during a Keighley-Oxenhope Heritage Railway day and ask a bloke from Hull where my plastic pint of stout had disappeared to.

Anyway, 30 mins of bussing later, I was there and the pub was staring at me with sad eyes: 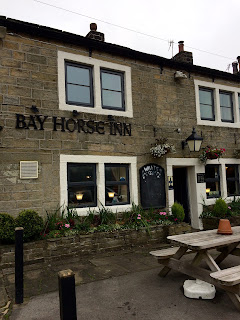 What the photo doesn't show is a man and woman stood to the right peering towards me.  "Looks like you're on a mission!" says the bloke, so I briefly explain BRAPA and praise them on being a rural pub open on a Monday, bad mouthing a few new West Yorks micros in the process.  "Me and my husband are looking after the pub, the owners are away on holiday, he's behind the bar, tell him about your challenge!" says the woman, "you look like you need a drink!"  So I went inside but not my style to 'announce myself' unprompted, but the other bloke had followed me inside and obviously thought I needed special treatment,  and tells off the stand-in landlord.  "You've given him a cloudy pint ..... and it's in the wrong glass!" he says.  Poor stand-in landlord explains it is only cloudy because it is "cooling haze".  Hmmm, a new term on me.  But it did clear.  And I did get an apology for the Thwaites glass, tsk tsk (like I really cared).  The pub felt a bit of a work in progress, gents out of action, a room full of clutter, a backwards facing piano, like they're either about to have a refurb or are buggering off for good!  Tiny bit draughty too.  Yet it was very 'real' (my fave word for describing Joseph Holt pubs, amongst others) with locals under the sign of the Jolly Roger sadly being more Jeremy Clarkson than Captain Kidd.  They just played each others car YouTube videos on their phones, occasionally saying things like "phwoar, sounds like a Toyota".  Cars are so boring in my opinion (though I must remember, the blokes weren't there to entertain me!)  I read a Worth Valley magazine, duller than dull.  The temporary landlady temporarily came to sit with me, but I was too busy fielding twitter comments from demons like Taylor, Quosh and Mackay to chat to her.  And overall, as I went to catch my bus back to Keighley, can't help feeling it was a bit of a flat experience.


So all in all, when I'm sat there in front of the fire in 2050 handing the Werthers Originals around to the GrandTwilds telling BRAPA tales of yore, I doubt I'll be exclaiming "let me tell you about the time I went to the Bay Horse at Oxenhope".

As a GBG entry, I couldn't say it didn't deserve it's place, like you could with a couple of Saturday's pubs, but if it slipped out of the 2019 edition, I won't be marching bare-footed to St Albans with a Bay Horse placard demanding the head of Pete Brown on a spike.

Another one down, SEVEN left in West Yorkshire.  Hopefully, we can get back to Tuesday normality (my hand was forced again this week) from early Oct which will give me a bit more scope with some of these pesky non Monday opening Micros etc.