BRAPA - The Exchange of Shakey Wakey

Wakefield is one of those towns which you only get the full atmospheric benefit of in driving rain on a grim September Monday evening, where 99.9% of commuters just want to get back through their front door as quickly as possible, leaving the 0.1% of dripping wet idiot pub tickers following the little blue dot on their phone as the next pub draws gradually nearer.

The 15 minute train journey had been notable for two things.  Firstly, the Wakefield citizens standing in the vestibule blocking anyone from getting on the train, despite the fact there were swathes of empty red bays of four up and down the train.  I understood the rationale, but still selfish and a bit "I'm not worthy of a seat" downtrodden.   And secondly, the announcement surely said "can those passengers in the quiet coach please switch their phones to violent mode?".  That's how I heard it.

Anyway, 38 minutes from leaving the bank to having my pint pulled must be a new Tuesday (Monday) evening record outside of L**ds. 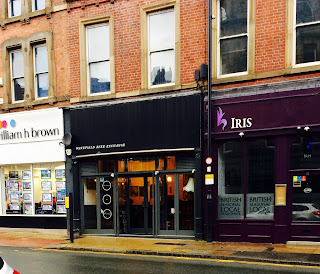 Predictably, three customers including me made for one of the quietest pub sessions of the calendar year.  On the way in, I said hi to a friendly nervous looking guy.  But he later stared around the room "observing" with the air of a junior pub ticker so I looked at him like "oi pal, geroff my territory!"  Customer two was an older moustachiod man.  Probably an elder pub ticker.  If you opened up his long raincoat, Taylor, Winfield and Mackay would tumble out, foiled again.  An elaborate joke gone wrong.  (I'm feeling paranoid of late, can you tell?).   My reception from ponytailed bar-lad, like my Great Heck ale, was a bit lukewarm but not bad.  What I thought were customers 3 and 4 were staff members on a break / finished their shift, drinking here.  I never understand that, I tell you if Yorkshire Bank did real ale, I'd still go next door to Stick or Twist.  So yeah, the lack of friendliness surprised me, what with all this "exchange", vinyl records, hang the DJ (huh?), local fish & chips.  A blackboard sheltering in the doorway promised "drip coffee", "loose leaf teas", "organic wines" and "quality gins".  This isn't Altrincham-cum-Hardy, and I'm not sure Wakefield is quite ready for such bullshittery.  The pub reminded me a bit of a cosier North Bar in Leeds, a bit wider too, but come in here in the death of winter and you may need to re-evaluate.   Music was decent as Frank Sinatra effortlessly merged into The Undertones, and then the underrated "Eighteen With a Bullet" by Pete Wingfield (a man who looks and sounds suspiciously pub tickery) finished things off nicely.  I did find two weird bite-marks just below my neck which weren't there before and went soon after I left the pub, so not sure if this is normal.    If you visit, let me know if this happens to you.

I popped into Old Printworks (once I found the damn thing in the rain) which I had been to in Jan 2014 but am soon to review in my "archives" blog I keep promising to do, so I needed to refresh my memory (I was rather very drunk at the time).  I'll save some humorous overheard convo for then.

Of course, it didn't help that my Mum and Dad seem to have turned their anniversary holiday into a Dorset/Somerset BRAPA special.  Mum has written a BRAPA style blog from Wells she is going to send me (how cute!), and Dad keeps popping up in places like Spettisbury, or sending me pictures like this: 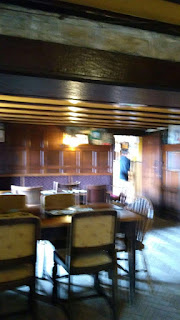 Because he's drinking cider in Worth Matravers like this: 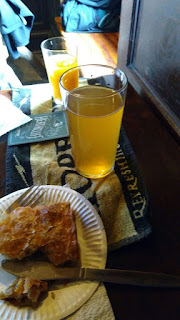 I tell ya, BRAPA is yesterday's news and there's a new generation taking over!  York Beer Fest tomorrow, but I'll be back soon with archives before Saturday's 'Tom Birthday extravaganza' of somewhere exotic.