It's fair to say that after two days in bed unable to move and then only three hours sleep due to too much inactivity, I wasn't best prepared for my penultimate trip for Berkshire ticking, but I forced myself as it seemed like the 'key' journey of the month.  Surely getting myself on the 07:01 was the hardest part, right?  Hmmmm, well the pain lasted well into the afternoon!

All I did learn from the journey was that 'cultured' Doncaster Rovers fans drink Strongbow Dark Fruits instead of Carling.

I walked the short way to St Nicholas Hurst from Winnersh railway station (sadly not Winnersh Triangle which sounds like a lady-part to me!) despite Google Maps making out I was about to kill myself, and had 20 minutes til the pub opened so I walked around this place called "Dinton Pastures".  Ever been to Virginia Water?  It is a bit like that for the Mid Berkshire "elite" with less water, more mud, fewer dogs and less frisbee-beardie-toffs. 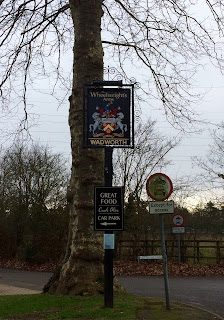 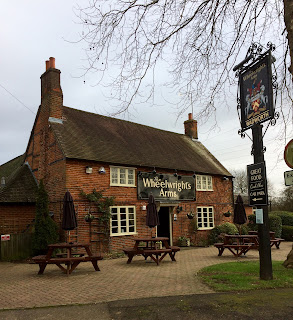 11:55am and I'd waited long enough, hurrah the pub is open early and the angry dogs I'd seen behind a gate earlier had been disappeared.  I was looking for hand-pulled lemsip to no avail, at least I found an ale described as "zingy", in this, the most Wadworthy Wadworth I'd seen since a 2004 visit to Swindon.  A bit like the Rowbarge at Woolhampton, this pub was massively gastro yet still likeable at the same time - staff with a good attitude and an area which felt like a shrine to Wadworth and the 'old days' of drinkers pubs helped enormously.  Along with a dog that came in for a bowl of water, I was called "sweet pea".  A man in blue, the only other "drinker" ordered a pint at 12 noon, and went back for another at 12:08pm 'to beat the lunchtime rush'.  I smiled at him in a "drinkers together" way but he just looked guilty in a "don't tell the wife" warning look.  Forgetting my emergency beermat was a bad mistake, symptomatic of the lack of sleep. and I'd suffer again for this today.  The pub busied up mainly with old duffers, and I was aware the bloke behind me was deaf, but when he expressed massive shock at his liver casserole, I realised he was forgetful too, which much make meal times a huge surprise for him each time food appears!   I'd just been researching my next West Yorkshire trip when I looked up to see a snobby woman scowling at me from the bar.  I was nursing my last sip of ale, and she wanted my seat.  So I took the piss for as long as I could (well, about 5 mins more) before slowly leaving, returning my glass and smiling sweetly in her sour face as I did so!

I walked back to Winnersh for the delayed train back to Reading (waiting another hour for a bus which then took 40 mins didn't appeal) and after a struggle to escape the barriers, I hot footed it a mile across town out 'east'.

And so nice it was to be down some cute little backstreets in Reading, it almost reminded me of my trip to Old Aberdeen though maybe I am exaggerating a bit.  Still, there's no better pub location than hidden in a row of terraced houses, in my experience:

I was very surprised to find myself the only customer on arrival, still I got the friendliest greeting all day from the landlady and landlord, who were just sat reading their papers.  We agreed it was another chilly day, which allowed me to mention my flu, in an attempt to gain some sympathy which worked in a 6/10 kind of way!  In fact, if I had one criticism of the pub, it'd be it was a bit too cold.  Again, we had a big Wadworth influence though I think I went for a guest, and took it along with a local CAMRA mag to the far left of the pub, where the walls were adorned with pumpclips, Lighthouse Family blared out a bit too loudly.  If I was surprised to see not one local in here, the next man who appeared was also a stranger, though a more southern one than me.  He scanned the beers and said "oh, what a great selection!"  I felt outraged, like "I'm their favourite so shut it visitor man!" Then he took a close up photo of the Cask Marque accreditation on the wall so I wondered if he was visiting all of these pubs, but I avoided eye contact cos I was not at my sociable best.  Good thing was, his big fat head perfectly obscured me from the owners so I could smuggle my steak bite.  Every cloud.  He got lost finding the loo (amateur), tried to say hi, so I waved a dismissive hand cos I was reading an article in the CAMRA mag which mentioned Quinno ("hi Quinno!" I said out loud, as he was in Prague and couldn't join me today).  I left telling the couple "thanks for great pint" but Mr Cask Marque had just done that so my words sounded hollow.  Bastard!


Back into the middle of town, pub number three was one I'd passed regularly on my April 'Beezer' here when I stayed in the Premier Inn.  Although Quinno mentioned it back then, I never suspected it'd get in the GBG! 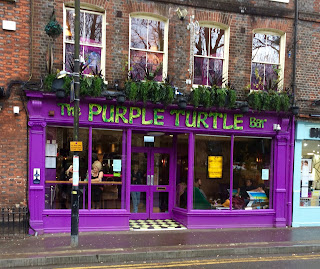 The Pairple Tairtle (as they say in Hull) is apparently notorious of many a wild drunken night of people's misspent youths (according to the GBG), and still closes 3am, presumably quality ale is all that has changed.  My entrance was so stereotypical 'rock club during the day' I'd pretty much rehearsed it in my head on the walk up.  I enter to find a group of hyperactive lads playing table fussball, frantically trying to impress some disinterested girls. whilst an equally disinterested green haired barmaid serves me from the one ale available whilst Foo Fighters play on a video jukebox.  Plus everything was luminous purple, so much so that if I was to keep the Aberdeen theme going, you could say this is a less good version of Krakatoa.  Well, me and a bald man exchanged pained smiles ("we are the only respectable people here") as we took our respective pints of Elsie Mo (very well kept I must report) to posing tables.  They did also have Tutts Clump cider on, which has probably gone from Aldworth to Cool in 12 months.  I noticed drum kits were being used as lights, and there was a stage were local bands probably play.  I'd guess it's quite a good little venue, but as a daytime GBG tick it can feel a bit depressing, as with the Alma in Bolton.  I'm probably just getting old!  Anyway, I think it was here my flu started to properly subside, it probably found plenty of like minded viral species to latch on to.   Still, not all bad and wait til the Kinky Koala gets in the GBG in a few years..... (you think I'm joking?)


I kept walking west, past the Castle Tap which I'd visited as a pre-emptive last year, and past something called Old Reading Brewery (I think) which looked like it could a potential brilliant place.  My final pub of the day was even more deliciously side-street than the Eldon.

The moment I walked through the door, I felt at home.  And that wasn't just because both ales were guests from Tim Taylor and Black Sheep.  If I saw such a range in York, I'd probably roll my eyes, but in Reading?  Well, it almost brought a proud Yorkshire tear to them (okay, I'm exaggerating).  Anyway, the pub was busy, almost all old men laughing and joking and watching the football results coming through on Sky Sports News.  The barmaid was a kind old lady, and I took a mass 'smoking break' exodus as an opportunity to stretch out and make myself comfy at a corner table (though near enough the door to make a quick getaway if needed!  Not that it would be).  My highlight might well have been the struggle it took me to find the loos, as it allowed me to go down an outdoor corridor, through this back pool room, and I eventually found them outdoors round the back.  It is a small and basic pub, yet somehow wonderful and reminded me a bit of Golden Ball and Slip Inn in York, only smaller with a stronger community feel.  A bald man with nice aftershave struggled to hang a coat on the rack behind me, and then Hull City scored to go 2-1 up!  Later, I went to the look again and Hull City scored again!  A lucky pub too, even if I suspected the majority of locals had Bournemouth down for the win judging by their reactions.  Losers.  Actually, the 2nd luckiest Hull City pub of all time (2 goals in 32 mins) after the Wigmore Arms in Luton (3 goals in 28 mins).  Really enjoyed this pub! 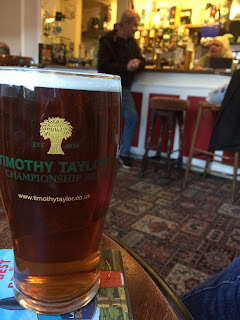 Well, I was booked on the 19:00 which I was pleased about for once (couldn't face a London pub!) so I embarked on what was quite a slow meandering journey towards Kings Cross where a nice Welsh lady let me sit in first class to Paddington because the train guard had stopped checking tickets.  And then up to York, I had Newcastle, Hartlepool and Doncaster ALL on the same train which amazingly worked well as it caused an equilibrium of douchebaggery.

Only ONE more Berkshire trip to do, only TWO pubs, both out West.  That is next month.  Very exciting.  Now, every trip I am planning seems to have Buckinghamshire in mind and I've got plenty coming up before January is out. 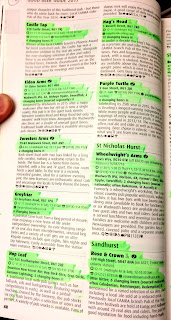 So a tough day physically, but some great pubs and I'll be back on Tuesday for the latest West Yorkshire tick(s).