When you wake up on a Sunday morning in a Croydon Travelodge with a "to do" list of 3,599 items, you start wondering if you are unnecessarily complicating life.

And this was the kind of day wish left me wishing I could rewind and do differently.

Even from the miserable breakfast in the Travelodge cos they'd all but run out of food (I'd have gone to Skylark 'Spoons instead had I not paid!), today just didn't go well.

I got myself to Marylebone and purchased an "add-on" to Great Missenden, a spur of the moment decision with the aim of walking 2.5 miles to the Crown at Little Missenden, but the A413 could have been the A1(M) and I couldn't walk along it!  I tried two different ways, worked out a long-winded rural third, but knowing the pub was closing 3pm, I'd not make it in time.

I sulkily appreciated the pretty town of Great Missenden with it's Roald Dahl museum & twild wannabees, and jumped on the next available train to Chorleywood.  From there, a brisk 25 minute walk to Chenies had me nervous.  I'd lost confidence and had to spend 5 mins on the A404 but thankfully, this was a nice A road with a path and everything!

I walked into Chenies, lovely little place - have I ever been so relieved to see a pub?  It was nearly 3pm already and my first of the day, rubbish Simon!

Just to explain, with me being so close to finishing Berkshire, I was eager to get cracking with Buckinghamshire hence my insistence on making a 'London' trip more complex than needed!  The pub is described as an "autarchic freehouse(!)" and it seemed the Sunday lunch crowd were outstaying their welcome (or people eat late in Chenies) and the place was bouncing, like the waitresses tight tops,  and it was one of those pubs with an army of staff in a tiny space which almost outnumbered clientele.  I'd originally thought the sign said "anarchic freehouse" which may have been nearer the truth.  "It's been manic today!" wailed one barmaid, as I paid £3.70 for a Vale Best (incredibly lively bubbly bitter) in ten and twenty pence coins, to a young bar-lad, a nice funny youth who stuck his tongue out whenever he was concentrating, like on counting change and stuff.  Soon a mellow Sunday hubbub took over, all coffee n cream and prosecco n nuts.   Two friendly posh men who looked like well-groomed Bob Dylan's stood at the bar and said 'hi' to me in a smooth classy way, but guess what, I needed that emergency beermat yet again! 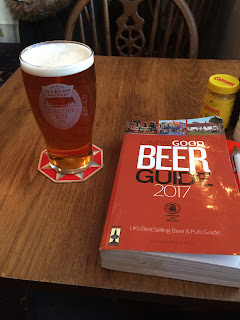 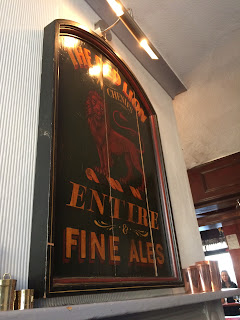 The other side of Chorleywood was only a mile or so from Heronsgate, where there was a pub I'd wanted to visit since 2004.

In our early days of going to the Whalebone in Hull before home games, me and Dad were struck by the random array of CAMRA magazines and we picked up the Hertfordshire one, Dad saw a full page advert about how great this place was.  When we got promoted and were playing Watford, we entertained the idea of coming here pre-match but it never actually happened, til now, 13 years on!

The pub name is very wordy, enough to give the bar posers of Chorlton-cum-Hardy sleepless nights with it's evil multi syllaballed ways.  It was one of those "you know it's a class act as soon as you step through the door" pubs.  The landlord's friendly smile, the exciting range of (4 out of 6 Yorkshire ales) seemed rare, bare boarded floor but comfortable, a sleeping dog, happy old and middle-aged locals,  A big blackboard declared their target of 370 beers to put on in 2017, to beat their 369 total of 2016.  Whilst I was there, York Snowflake (5 out of 7!) was chalked on a board just above me - this reminded me of Hull's Wellington at it's best, but with a bit more pub hubbub.  Considering I'd arrived with a stone in my shoe, a snotty nose, needing a pee, my sense of well-being had gone through the roof within 2 minutes of arrival.  Oh, and mobile phones were strictly prohibited but it was still perfect timing to be included in a Twitter chat about beer quality in GBG pubs.  I'd been trying to work out what made this place special, and I think the fact everyone was drinking ale and talking about it passionately - plus the landlord took time out to come and chat to an old man in the corner about the weather -  a nice touch.  Classic pub.


Although it was pitch black and freezing cold, I was buoyed by this experience and decided to hang around for a tube to Chesham where I had an out of town pub to do (Chesham is at the end of the Metropolitan line, only runs twice an hour as some go to Amersham).

I'm no weather expert but it must have been about minus 100 or something and if the walk wasn't painful enough, eventually the street lights and the pavement ran out and with cars whizzing with full beam headlights round a sharp bend on the B4505, and me not be able to see one step in front of me, it was a heavy heart I gave it up - I was only 0.3 miles from the turning - so frustrating.  But I wouldn't be here now to write this if I'd carried on!

By the time I got back to Croydon, I'd been out 9 hours for a 2 pub return.  I hate BRAPA!  It was approaching closing time so after stocking up on food, it was time for the pub equivalent of scoring two injury time goals having done nothing for 90 minutes..... 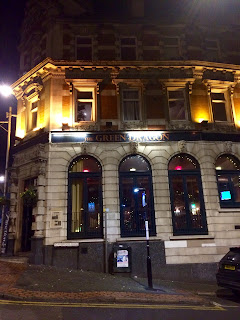 At least it was a day of getting monkeys off my back, I'd first considered this pub as part of a 2005 trip to Crystal Palace away, and it's still in the flippin' GBG innit?!   I was amazed how huge it was, less surprised it was a former bank, but kind of pleased it wasn't Wetherspoons owned.  Not that the crowd cared, a terrifying Sunday night bunch.  With a vague whiff of puke in the air, it would be easy to dismiss this place as a dirty Sports Bar but it obviously had a passion for ales with hundreds of pump clips and a barmaid very eager for me to accept her "dimpled jug" over a straight glass.  I don't normally like handled glasses, but didn't want to upset her hopeful blonde face.  I think she was just pleased I was an ale drinker amongst the shots flying off the bar.  Everyone was pissed as newts, from the rowdy pool players in the corner, two Eastern European girls on the vodka, and a skinhead sinking so far into his girlfriend's lap, he was horizontal on a leather seat half an hour later!  Scariest of the lot though, an old woman with half-mast bondage trousers who looked and walked like Neil from the Young Ones and kept prowling the pub.  No eye contact!  The toilets were an impossible maze of upstairs rooms, some friendly guys were holed up in a hidden function room, the temperature was a degree too cold, and the TV screen was dirty, distracting from the snooker, still it felt like a fitting place to see a scumbag like Ronnie O'Sullivan to win a major final!  Crazy place, glad I experienced it. 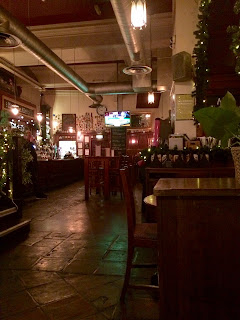 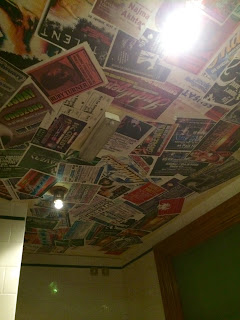 Like the Green Dragon, my next pub was closing 10:30pm on a Sunday and it was getting on for ten past, so walking down two alleyways when the address clearly said 'Surrey Street', (the street I was ON) was probably symptomatic of my over-complicated day. ....

And to my relief, a friendly barmaid seemed more than happy to serve me even if table polish was out and a chair was inches from being acrobatically flipped onto a table.  This was a much more intimate venue than the Green Dragon, though the tattooed barman started warbling to some strange opera style music, though when I tried to smile in an amused manner, he glared as if to say "I'm an amazing singer okay?"  The pub felt like a Youngs pub (because it had their beer on, nothing gets past me) so I took my pint of Special to the adjoining side-room where two chaps were chatting animatedly and their presence felt like a nice 'last-orders' buffer, though I made a mental note to drink quick and not to take the mickey.  This was one of those pubs that felt so ancient, that vague attempts to modernise 20th/21st century style hadn't really had an impact - beermats in here were on the bar but not on the tables and I was too scared to pinch one from under the nose of Mr Opera.  Take away the wanky dried flowers, wine lists and wall quotes about cheese and you've got an excellent pub.  The two blokes got onto my fave topic of Celebrity Deaths but when the younger beard mentioned Brian Matthew of "Sounds of the Sixties" fame, he was told he'd gone too far!  Last orders was finally called, just to us three in person, and he sang it you won't be surprised to hear.  Then it was weird cos they played "Always Look on the Bright Side of Life" very loudly, and all staff appeared from nowhere and sang and danced around!!  Was this a thing, do pubs have "Last Orders" tunes?  I know a pub in Fulford near York always plays L**ds Utd anthem "Marching on Together" at last orders (utterly awful), wonder how common it is?!

So that was it, back through the freezing night air of Croydon to my Travelodge - determined to do better on my third and final day!