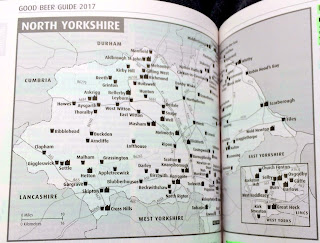 Only 13 North Yorkshire pubs to go after a gentle Saturday of chauffeuring fun on Dad's 70th birthday weekend.

We stopped in pretty market town Stokesley at 11am, just to prove we could find a parking space basically, but it was an opportunity to draw out some extra cash (it's hard to know what they are going to charge you in these fleecy parts).

In drizzly grey rain, we drove through Great Broughton and Dad identified the Wainstones Hotel as a place where all Yorkshire pensioners meet for lunch every March.  On a previous visit, Dad had actually driven into the car park of the BRAPA pub in question by mistake, but this time he allowed himself to park the car and get out ......

If every Marstons pub in the UK was as good as this one, I think the world would be a better place.  A warm welcome (and I don't just mean the fire that nearly singed my hood!) from the landlady and her gaggle of young blonde gigglers.  With me straight on the Hobgoblin Gold (I had to explain 3 times we weren't here for food, it was such a revelation to them), it was the perfect time for mother hen to train the youngsters up on the art of pulling a pint.  "You 'av to learn Jules" (not her real name) "and that one over there...." (points accusing finger at sheepish background brunette) "...is on the bar by herself tomorrow so she'll 'av to learn too!"  After a few tentative tugs of the squeaky pump, my pint finally arrived and I offered words of encouragement, for which I was quickly admonished "don't!  It'll go to her head!"  Oh well, Dad got a coffee with a wanky little mint and some fancy sugar lumps and cream, cost a small fortune (well £7.20 alongside a half, so probably can't complain too much) and as a bit of unobtrusive Carole King warbled around the room (replacing traditional North Yorks fave, Dire Straits) we agreed this was a cosy sizeable old pub that you couldn't dislike.


A few miles down the  road, was the pub which I learned (in the most boring fact of the day) was the furthest north in the York branch which Cleveland tried to steal off them.  But chairman of the time GK Smooth (not his real name) said "no way" and that was that.

Another North Yorkshire trip, another Buck Inn!  At a place possibly pronounced Chop Yat.  They had some lovely stained glass doors signifying "bar" (to the right) and "lounge & restaurant" (to the left).  You'd think "bar" all the way, but in this room, no heating or handpumps or staff forced our hand into the typically 'set out for dining' main room, but it was comfy enough.  A Twild was present, but upon seeing me being served, immediately screamed "eeeek BRAPA", ran outside, and presumably went to drown himself in the nearest available pond.   The pub had decided to retain that rural North Yorkshire "we serve all aspects of village life" vibe, so had Crunchies and Creme Eggs on the bar, but it looked a bit of a forced gesture - you are not the Birch Hall Inn in at Beck Hole so get over it!  A nervous thin man who couldn't keep still kept darting from bar to bar, eventually buying 2 bottles of Newcastle Brown Ale and running off Twild style.  The music sounded like a compilation Jools Holland had created, all powerful women with powerful voices that he could tinkle his piano along to like the bland magnolia man he is, ughh.  Anyway, where was I?  Oh yeh, pretty decent pub but preferred Bay Horse when all said and done.  Oh, and I drank a beer from Wainstones brewery as a tribute to the pensioners hotel. 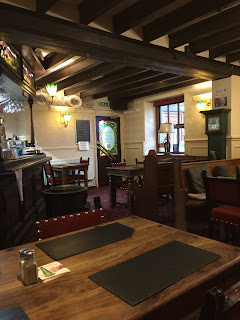 We then drove down to Helmsley, through that lovely little town, past the brewery, down a few crazy country roads past Byland Abbey, and soon we were in a pub I have so nearly done on so many occasions, it was finally nice to get in.

Like a pair of pubby Olympic relay runners, a £10 note changed hands FIVE times between me and Dad as we stood at the bar waiting.  First he went to the loo, then I did, then he went to post his letter, then I gave him the note back when he returned, but then he went to sit down so passed it back to me, I paid and gave him the change!  All this was necessary because the Helmsley beer we wanted was off, barrel had to be changed, then a tricky air-lock needed sorting out.  No wonder an irritating young bearded man was looking so frustrated, he only wanted to pay for his meal whilst his sickening girlfriend and doting parents looked on.  He decided to exact revenge on us in the only way he knew how.  He laid a retrospective log in the gents (unflushable), which was named "the poo room", seemingly in a nod towards my High Wycombe ladies incident.  As if that wasn't enough, he kept walking in and out of this not very well heated pub and letting the draught come through.  Why are men with hipster beards always the most ignorant pub goers, it is a trend I've noticed  since BRAPA began.  Fluffy Tom Irvin-esque beards, no problem, but the sculpted ones, ignorant dickheads.  Just when I was finally relaxing with my pint, I jumped out of my skin as a cuckoo jumped out of a clock behind me, twittered unnecessarily (just like me in most pubs ha ha ha) and went back inside again.   This pub seems to be a real "in the GBG one year, out the next, back in year after" and now I've been, that makes perfect sense.

We were done in record time so able to have a nice relaxing session in the Fox (York's finest pub, not in the GBG) and Dad suggested I write a book called the 100 best pubs not in the GBG.  If people have any ideas (I only have 4 in mind!), I'd like to hear them.  The pub also seemed to think Dick Turpin and Guy Fawkes used to work as a team, which is perfect York villain propaganda.  An amazing pub, but am bored of saying it as no one listens!

I'm having the midweek (i.e. tonight) off West Yorkshire BRAPA so I'll si thee all on Saturday for some daaarn saaarf fun, but before then, I'll do my month end review and preview.