BRAPA - From Zero to Hero in Saltaire & Shipley

Titus Salt might have banned "beershops" in his visionary town of Saltaire, but on all three of my visits so far, my purpose has been just that (he also has a Wetherspoons named after him in Bradford, and his family home is now a pub near Wakefield).  Ever get the feeling you are being mocked?

After the yearly 'squashed like sardines' 17:26 train service from L**ds (I couldn't do that every evening), I walked the ten minutes or so past t'mills and little houses to their new micro-pub ...... 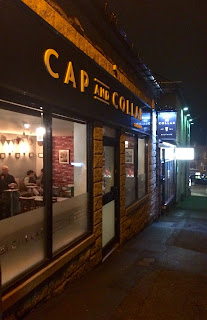 Built in 2014, this was about as 'true' to the Hillier-esque wet dream vision of a micro-pub as you could expect to see.  A small pale and draughty room, presided over by a jolly landlord and a lot of expectant looks on arrival from a mainly youngish professional crowd, but no actual acknowledgement.  I ordered a Saltaire stout no 5 (when in Rome....) and took it to a high stool with an inordinately small 'seat' - I'm no 'fat-arse' but you'd have to have the butt-clenching qualities of a tight-jeaned hipster to balance on these monstrosities.  I don't like facing "away" from the pub cos I'm a nosy pub observer but it would have meant facing either (a) a necking European couple or (b) a frustrated theatre actor who eventually stood in the centre of the pub and broke into song ("I can't see-ee-ee, your smi-iiii-le anymorrrrrre" he crooned), terrifying all who shared the intimate space.  My stout had an unwelcome fizz, bookcase wallpaper seemed unnecessarily tasteless, and two bearded suits decided to steer clear of the stout when they were informed that it had a hint of vanilla to it, and returned to the safety of their euro shizz.   Later, one of them was forced to justify why his wife hadn't turned up .... "she's normally reliable, I promise ..... she must've lost her phone!"  Of course mate.  I watched a lady outside parallel parking on a hill, it was painful, it summed up this place.   More Titus Bramble than Titus Salt.


So it's fair to say I embarked on the 10-15 stroll to Shipley not exactly high on anticipation, knowing that my next pub was also described as a 2014 built micro-pub.  I took a chance down an unpromising dark lane behind Costa Coffee and a bowling alley, the kind of place you go to take the bins out and have a quick slash if you are caught short.  And as Ace of Base once sang during their own pub challenge of the 90's, 'I saw the sign' .....

But isn't this just the sheer joy of pub-ticking?  When expectations are at the lowest, you get a welcome boost.  Hurrah!  And apart from being an unpromising 'space' converted into a place for local drinkers, this was about as far removed from the stereotypical Micro-pub vision as was humanely possible.  And all the better for it in my humble opinion.  Four ales on, Tetley's, Black Sheep, Askrigg Ale and Copper Dragon Best Bitter, this was the most traditional ale line up in a micro ever - Sam Smith's drip mat, Bass mirror too.  Even Carling was on!  The landlord spied me photographing my pint, told me he'd top it up even though I'd had two swigs, and said he'd have brought me a brewery glass if he'd have known.  I took my pint to the other side of the roompub where Shipley's version of Benefit Street were eagerly watching the green baize of a pool table being meticulously cleaned and ironed in readiness for the "Shipley Ladies League big match", starting later on.  "You can iron mi shirt when you've finished with that table!" said one toothless chap to much hilarity.  Conversation did end up getting a bit heated (and all due lack of commitment from certain members of the ladies pool league).  But this was a cosy warm place, a nice flat pint, a seat you could sit on, and a happy clientele.  I don't ask for much from pubs, just to be honest, basic and real, let them speak for themselves and the quality will shine through, very much like the Foresters on Saturday or the Rising Sun in Tipton.  With Tom in mind, I even wondered if it could break the final micro-pub taboo and offer blackcurrant cordial, and I only had to glance at the bar to see a bottle sitting there.  Genius.


So that cheered me up, and as you can see, the (official) 1,000th pub is fast approaching.

Anti-climatically, it will take place in LONDON.  Probably on Saturday.  I know 4 pubs it won't be as I know the agenda on Saturday up to that point, I can surmise it might be somewhere close to Gipsy Hill.  But not Gipsy Hill.  Streatham Hill?  Dulwich?  Crystal Palace?  Forest Hill?  Battersea?  Balham?  Clapham?   Something like that.

And if not, Marylebone on Monday.  Bet you are all excited now(!)

Let's hope it is less dull than the Delph in Orrell (my fake 1,000th back in August).