My only two prior bits of knowledge on Worksop were as follows - I once had to retrieve a cricket ball on the boundary rope for a big West Indian called Otis Gibson.  Secondly, Maid Marian and Her Merry Men was supposed to be set there (Devon in reality).  So it was with some surprise that I saw no mud huts or stray cricket balls as I wandered around the market place at 10am.  Quite a decent town (many include my Mum had warned me of scroat potential) and female people smiled, and it was easy to navigate.

I found the bus station so I knew exactly what Bay I was using later (Bay B, baby, baby) and then ventured back to my first pub for 10:55am, getting briefly distracted by something I thought was a micro-pub pre-emptive tick:

Like the brilliantly balls-to-the-wall boozer that it is, the pub was in full swing before 11am and the half Chinese barmaid was obviously from the "I'm very friendly to a point but I take no nonsense from idiots" school.   £2 for a perfect pint of Christmassy Welbeck Abbey was superb.  Had I been brave enough to take a photo of the locals sat in a line facing the bar, it would have been "pub photo of the year" but I chickened out.  They aren't animals in a zoo.  Not quite.  Instead, I was hailed by a crazy old chap referred to as "Uncle Albert" despite the lack of beard, he was all gums and weird Savile-esque noises.  But I sat along the bench from him and it was nice to see a series of younger men bring their pints of Carling over to him for a 5 minute chat.  Community is alive and well here.  He seemed to be having trouble operating his 1997 mobile phone, and when I told him I was from York and on a pub-ticking mission, he looked at me like I was an alien and our relationship was ruined.  On the plus side, the silent TV screens seemed to indicate Patricia Routledge and Ken Dodd had died overnight until I realised it was New Year's Honours list.  Then a screen showing the darts had "Unicorn" printed on each dartboard, like this pub had a monopoly on the world.  The barmaid was working hard on her own, commenting "the staff who've refused to work today will get their reward in the New Year when they are cut!" which sounded even more sinister than intended.  Great pub. 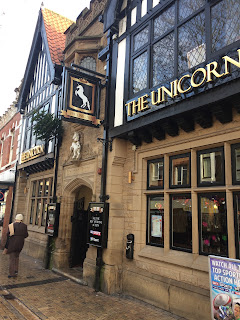 The bus was inevitably delayed by 10 mins but a bunch of us, including an ultra annoying woman who nobody seemed to like, hopped on.  The best fact I learnt was that Barry Harris is always moaning.  Not sure who he is but I'd like to meet him.  I jumped off the 19A at Woodsetts where the pub was just over a crossroads .....

Celebratory moment it certainly was, I'd promised myself back in February on my first trip to Armthorpe that I'd finish South Yorkshire by the end of 2016.  I left it late, but I did it.  Having said that, this pub fell kind of flat.  Even from the outside, the whole 70's Estate pub stuck onto old building looked a bit rubbish.  Raw Brewery Tap I hear, loved their beers when they had lots on in Barnsley's Old Number 7 on a football day, so why then, would they only have 1 on out of 5 pumps?  It could just have easily been Black Sheep, Dukeries, Tring or Imperial brewery tap.  As I was getting served, a cute elfin Asian barmaid shouted "you've got that coat on again!" I was about to comment it was my favourite, when I realised she was talking to an old man.  It would prove a bit ironic in that the pub was FREEZING COLD and I (and everyone else) kept coats and scarves on for the duration.  Something to do with "Raw"?  My Dad always judges how good a pub is by how long it takes him to remove his coat, he'd not have been a fan.  I then caused a minor stir by refusing to accept a 'loyalty card'. "One off visit" I explained, before hastily adding "unfortunately".  A blatant lie but at least I got a warm smile off elfin barmaid who by now was wrestling a cash register.  The music was shit, pub was dull, experience was quite drab all round as I used my STABILO highlighter to finish highlighting South Yorkshire.  One overheard conversation to end on:
LOCAL : "What is going on in here tonight then?"
BARMAID : "It is New Year's Eve."
And it really was that kind of pub.


I got chatting to a lady at the bus stop who had once complained about the temperature in the Butchers Arms when she had a meal there, so I wasn't alone.

Back in Worksop, I wandered back towards the railway station where two pubs were within view .... 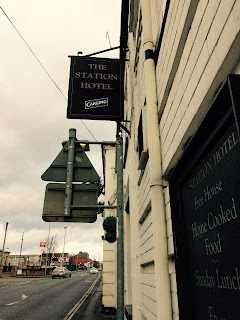 Ignoring the Carling pub sign, this pub was surprisingly homely, lounge-like with a touch of the working men's club about it.  Long and thin, opening out at either end.  The staff were again of the feisty female ilk, and the first question "would you like a loyalty card?" was again rejected.  Don't think I've been asked this in 976 BRAPA pubs previously, then twice in one hour!  This time it caused no stir, the locals were all sympathetic smiles as though "why is this poor chap drinking alone on New Year's Eve" so I tried to look content.  A local old man was dithering at the bar next to me, but his glasses were steamed up so he couldn't tell which beers were which, or what percentages they were so "to be safe", he decided to "just keep trying halves" with the reasoning "I can come back for more later if I like them"  which lead to much laughter from the bar area.   I sat facing the bar on some leather bench seating, only for a loud middle aged woman to sit next to me - her perfume was strong so I couldn't taste my Cocoa Stout, and the whining alsatian that had wandered in off the street seemed to share my opinion as it collapsed in the far corner.  Interesting trivia for future Hull City quizzes - where did I see most Hull City goals in the 2016/17 season?  Answer, Station Hotel in Worksop.  As for some reason, their TV was obsessed with us.  Perfume-lady gang kept expanding as more 50 somethings arrived, but the men were notably less excitable than the women.  "I'm just wondering how much longer we've all got to live" replied one man to a Happy New Year greeting.  Classic Notts response.

Right on the station was yet another GBG pub, of course, I could've got an earlier train home to York but that'd just have seemed wrong .....

The scene that greeted me made me realise I was in somewhere quite special straight away.  A small square carpetted room, full of well-being, pub hubbub and comfort.  A couple of locals parted to allow me into the handpumps, where a friendly barmaid wasn't offering loyalty cards, and a seat had just been vacated so I joined the locals lining the walls supping regular darts themed ale 'Shanghai' by Double Top.  One lad, who looked like he was on an anti-social BRAPA style mission, hadn't read the Mallard script, put his headphones in, put his feet up, and lay back as though he was in his bedroom.  Not cool behaviour.  One man, sat on the stool at the bar, seemed to be like the ringmaster, spinning round at regular intervals to check if people were having a good time and enjoying the beer.  It took a chance comment about how white wine was better than red to spark me into life, and I went on a pointless rant which even made Mr Anti-Social temporarily remove his headphones,  But it soon led to BRAPA chat, a man tried to counter-impress the locals by saying he was following a book to "drink 1001 beer before you die" but compared with 4500 pubs, it didn't have the same effect.  So take that chump!  The barmaid declared she was going home to watch Harry Potter in her pyjamas (a comment EXACTLY the same as made by my favourite BRAPA barmaid ever, at the Dispensary in Liverpool).  Amazing little place, almost stayed for another but remembered Retford was waiting for me. 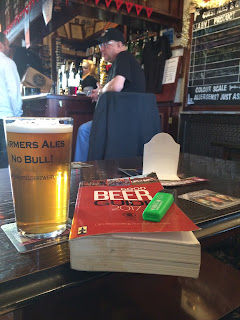 I'd wanted to be out of Worksop fairly early, not just because I was worried about NYE transport, but because Donny fans were returning from a 12:15 kick off at BloodyRubbishMansfield and I didn't want to get caught up in the "16 pack of Stella Crowd" I'd experienced on the way in.

After re-aquainting myself with Retford's idiotic split level station (I told a poor cleaning lady I thought it was ridiculous), I went to not the nearest pub as I had time to kill, so I went to the second nearest to the station.... 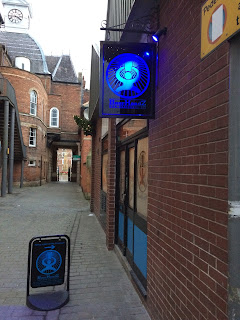 Ending 2016 BRAPPing with a pub ending in a "z" seemed wrong, but maybe symptomatic of the modern pub age we live in - yes, this was a micro pub though less micro and less pubby than the Mallard, but still a jolly little place even if there wasn't a seat to speak of, so I cosied up to the coat stand by the front door with a pint of Tiny Rebel "Fugg Life" from Wales.  If the pub name seemed mildly annoying, then we also had "Toiletz" and "Gentz".  The crowd was pretty middle aged, dogs and beer bellies and people being miserable about New Year celebrations (despite obvious drunkeness) was the order of the day. The landlord has a huge coat and scarf on at all times, I wonder if he'd just come from Woodsetts.  The pub sold it's own merchandise.  I can't imagine walking around in a "BeerHeadz" t-shirt.  The ghost of Rick Parfitt stood up and suddenly declared that "no-one likes the word 'Micro' anymore".  And then an emotional (i.e. drunk) woman left her group saying "wow, it will be 2017 when I see you all again!"  Considering it was nearly 5pm on New Year's Eve, it didn't get the exciting reaction she was hoping for. 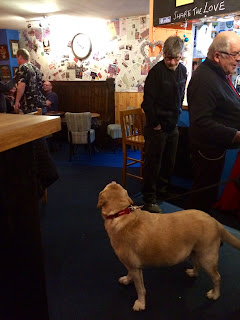 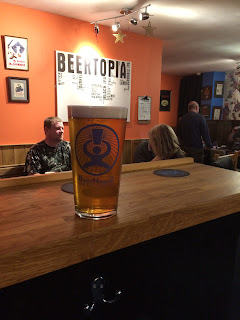 The journey home went well, trouble free, straight through to York without a Donny fan in sight.  See you for 2017 pub ticking and a Strategy Preview of the forthcoming year.