BRAPA - Scarborough, Thirsk and a Tale of Woe!

After a bit of recovery time from my Croydon excursions, I was ready to make the most of my week off work with a couple of 'bonus' ticks which didn't look like too much effort from York.

It was a sunny but chilly lunchtime in Scarborough when I arrived, but the new pub I needed to 'tick off' was not far away, on a bit of a hilly side street near a bridge, and had an appropriate name .... 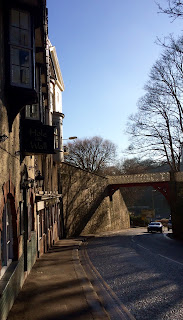 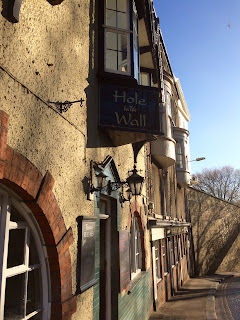 I walked in to find three middle aged blokes having an animated chat about local geography "well if ya know where Snainton is, you must bloody know where Brompton is!"  It meant nothing to me but they all said hello and the friendliest, youngest and smartest one promptly hopped behind the bar to serve me a fine Otter Bitter.  With a roaring fire, 40's music and sunlight streaming through the window up here, it seemed wrong to go downstairs to one of their 'lower' darker rooms, so I sat along the bench from this young bearded Jesus type who got chatting to the landlord about ales.  A very passionate pub man who loved pushing the "our beers are from Yorkshire and when we get Camerons on, Hartlepool is practically Yorkshire anyway so it counts!" card.   This next line is going to sound like the start of a joke but 'what happens when two mental health nurses sit next to a theatre performer in a pub?'  Do you give up?  Answer, 'they play Snap!'  So if I thought I had been sat a bit too close to young Jesus (who turned out to be an actor in the theatre), then this crazy couple (mental health nurses, day off, on the piss) squashed between us and though they were strangers, soon were playing cards and buying each other drinks.  I plonked my GBG on the table, but no one wanted to talk to poor Simey(!), not that I'd have wanted to play cards because it became a bit competitive, and Jesus having Pontoon explained to him seemed a step too far so a slunk off and wished them all a good game and rest of the day.  Don't you love pub life?! 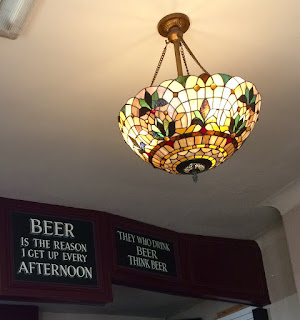 Back into York, back to platform 5, and off on the next train, I felt like I was stuck in a bit of a loop but luckily this was a Grand Central train heading north and stopped at Thirsk, a place I've always assumed was just a railway station, very much like Bedwyn or East Garforth, or Crewe!

The town was a good 25-30 minute trek from the station right alongside the racecourse so I felt like a flippin' horse but I still got to the lovely but stereotypical North North Yorkshire market place (see Northallerton, Stokesley, Bedale for identikit examples)  nice and early.  The pub wasn't due to open til 4pm so I thought I need a 20 minute walk around the market in the cold, but I decided to seek out the pub anyway to get my bearings and hey presto, it was open!

I've always thought never to trust a pub with a number in it's name, this pub having renamed itself having been called Three Tuns just like the 'Spoons across the marketplace.  I'd have gone with Little Three personally, or even something as awful as 'Thirsk Tap Brewhouse, Kitchen & Brasserie' - just don't put a number in!  But I was immediately won over, not just by the new generous opening hours, but the pub was suitably dark, beamed, old, full of nooks and crannies, just the perfect pub style - one room but you wouldn't know it, that kinda thing.  The man behind the bar was one of those "got my big overcoat on so not really serving" types who had to be told by the young couple drinking coffee in the corner (presumably the owners) to serve me.  AND I had to ask for a top up on my pint - I'm not one of these 'exact full pint measure nazis', but there's difference between having a head on your beer and a quarter of a pint of froth!  Still, he later redeemed himself by not once but twice asking if I was "enjoying it".  The staff then all decided to move furniture around, not sure why, for exercise perhaps?  After a holiday in which beermats were very scarce, this pub had them on the chairs aswell as the tables.  The younger chap seemed jolly, but singing along to Jack Johnson didn't endear, neither did doing a perfect impression of the creepy old guy from Family Guy, or thinking the female (a young angelic Wizadora type) had said she had 'fingernails in her foot' when she had pins & needles.  Really great pub this, who'd a thought it? 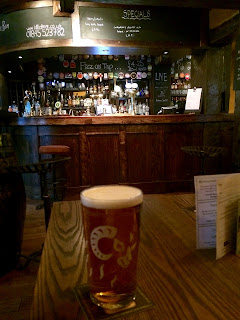 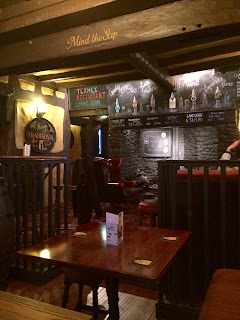 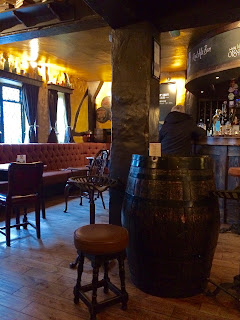 A BRAPA Tale of Woe

Fast forward a day and a bit and it is Thursday night, we are in Hull, and despite a spirited effort from the Tiger lads, it's evident we aren't gonna take this game to extra time so Dad (being the fantastic BRAPA supporter he is) says "it's now or never if you wanna try and get to West Haddlesey!" so we leave a few minutes early - cue evil glance from judgey steward, and we leg it to the car, and start careering towards Selby.

I needn't have worried though, as I check WhatPub and the GBG App, pub closes at midnight, 1am on a Friday or Saturday, and we turn off and see the George & Dragon all lit up,  It is 10:20pm.  The main light is on, and the kitchen area is lit too as Dad turns into the pub car park and reverses neatly into a space.

We hop out of the car, and then Dad notices "THEY'VE JUST TURNED ALL THE LIGHTS OUT!"  What?  It was all lit up 30 seconds ago!  I went to explore, not a peep, silent as a mouse.  Unbelievable!!!

Had I arrived on foot, I'd have been inside no problem.  They heard and saw the car, and swiftly closed.  100 minutes earlier than advertised.  I understand pubs closing early if lack of trade, but to be open, see someone arrive and then close, is totally back to front.

There's simply no excuse for such shady behaviour.  It's all very well people being told they should support the village pub, keep them open, but when village pubs don't want to help themselves, then how much sympathy can you have if they become West Haddlesey's new shiny Tesco Express?

My Mum has demanded that she is present at the final 'Yorkshire tick', what chance it is this one, I'm not in any great hurry to return!