The sixth and final day of this Cumbrian Holiday was all about filling in the remaining gaps so that I didn't have to return to the Lake District area in the next eight months.  Don't get me wrong, I'd had a great time but there is enough West Coast, Carlisle, Penrith type places to keep me occupied for the rest of the 2019/20 season, thank you very much.

Only two 'key' places on the map concerned me.  Elterwater (which I can only pronounce in the voice of Arnie), the only remaining pub in the heart of the Lakes, and the elusive High Newton, squashed vaguely in that Cartmel area, it probably had twinned better with my Barrow weekend, but I'd failed twice to make it so far!

That meant I could afford to do a pub that hadn't been on my agenda at the start of the week, so after my now familiar Premier Inn brekkie, I took a peculiar minibus driven by a moody chap called Darren, Dazza, Deggsy, Deano or Denzil, to a southern place called Sedbergh.

With a chill & a touch of damp in the autumn air, the sight of a Wednesday 11am opener with legs akimbo (well, door open) was a relief, and I stepped inside with a confident smile on my face .......


Grim, that would be my assessment of the Dalesman Inn, Sedbergh (1594 / 2811) if someone put the thumb screws and made me speak my mind, so I probably shouldn't hold back here either (as you know if you've read BRAPA before, I'm very gentle usually!  And that is a BRAPA fact)  I said 'hello' to the two old blokes at the bar, one scowled, one gave a nervous half smile, avoided eye contact, made his excuses, put a load of elaborate outdoor gear on, and left pronto.  The barmaid of southern accent gave the chilliest of welcomes, an overheard conversation later indicated that she was dreaming of the time when she could return to London / Oxford to do a proper job (unless she meant pulling a pint of Cornish ale).  Despite a weird centrepiece (I couldn't even be bothered to see what the weird polished stone represented), the pub was dining dull, the fire not lit, and it was my most miserable and stilted half hour in a pub this week.  The old bloke sipped his coffee and occasionally glared at Martin the Owl.  Maybe the location was the cause, it was almost North Yorkshire, and managed to combine the standoffish nature of a Yorkshire Dales dining pub, with the weird inbredness of one in Cumbria.  The beer was distinctly average and the pub didn't scream 'GBG keeper' in any sense.


Had the pub been even half decent, I'd have been tempted to stay for another with such a long wait for the bus back to civilisation (well, Kendal).  But no chance, I went to explore in the spitting rain, realising nearly every building in Sedburgh is a book shop, they are everywhere!  I didn't buy anything but a good browse, twee bakery visit, and public loos helped pass the time.

At the bus stop, I met one of the rare 'characters' of the week.  He told me that unlike the other men his age in Sedbergh, he was tolerant of black people and the Scots.  His friends say 'why do you bother with 'em?' and he says 'you wouldn't not buy a car because it was black or Scottish would you?' and although he hates young men with tattoos, if a man with tattoos spoke to him, he'd probably be civil.

After experiencing such Meta-wokeness in Sedbergh, it was almost a shame when moody Darren/Dazza/Deano picked us up, and after an old woman stroked my shoulder thinking it belonged to her grandson, it was quite amusing that a young chap with tattoos on his face hopped on!  I tried to see the expression of Old Mate, but he was keeping his head down.

Back in Kendal, I had an hour to kill so time for a pre-emptive.  With all of the micro style things not opening til at least 4pm, if at all on a Wednesday, I decided a refurbished old pub was the way to go.  Whatpub had amused me with this one ....... 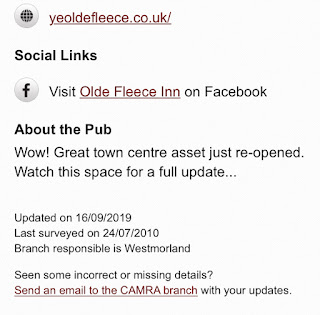 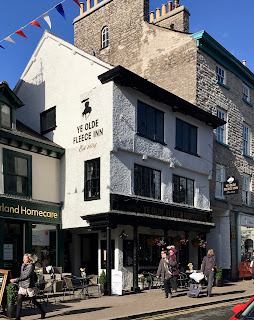 So I hope I can rely on Westmorland CAMRA to stick Ye Olde Fleece Inn  in a forthcoming GBG, because the slight attempts at 'high-end' Kendal pubbing, it was quite wonderfully done!  They'd kept in plenty of old features in place, oldest pub in town, a sign said, and even with a few diners in large booths, it had a warm atmosphere, helped immeasurably by one of the finest pints I had this holiday, from Northumberland in fact.  Staff were professional and couldn't do enough for the old buggers having lunch, and the gents bogs had the Shipping Forecast playing in both male and female voices on a loop, making it a relaxing place if you need to evacuate those bowels after a tough week.  Only Hemingford Grey's Blackadder clips can beat this pub for bog entertainment in BRAPA history.


The long trundle back into t'Lakes for my final pub at (Arnie voice) 'ELTERWATER' reminded me what an utter ball ache squashing these buses down these country lanes is.

With the sun shining and the sky blue, the bus pulled up in the village and a gaggle of people on the green bits opposite the pub had me thinking 'ey up, tourist pub central!' but a boy's allowed to be wrong occasionally ...... 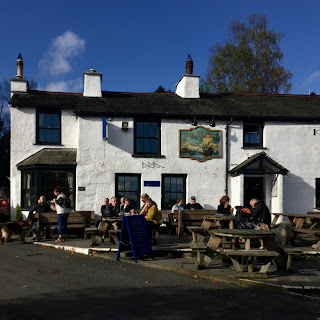 Yes, I'm delighted to report that Brittania Inn, Elterwater (1595 / 2812) was one of the more fantastic pubs of the week, maybe we could go out on a high after all after the Sedbergh trauma?!  A welcoming but very busy front bar saw me squashing in for a cheeky pint of Bowness, served by staff who seemed to have a sense of humour, and as I swung round,  luck was on my side as a table of 4 had just been vacated, in prime position, facing bar next to the most fabulous roaring fire to end a week of fabulous roaring fires!  Shame my warped mind felt the room probably resembled Mary Kelly's after Jack the Ripper had put her heart and other organs on it.  Like they read my mind, something weird then happened and a la Badger Bar in Rydal, this busy pub cleared out, quick as a flash!  Soon, just me and an unappreciative bloke playing Candy Crush were left.  Some Euro walkers eventually rescued him.   A trip to the bogs added to the pubs legend as I found corridors, side and back snugs, and 'hand dryer' of the week, a rare Crocodillo.  A perky bald family said something along the lines of "yes mate, you've discovered a great pub we've known about for years".  An odd Scottish couple came in, saw the fire, said 'och, wud ye look at that?', faffed around looking for an ale that tasted like Special Brew, and retired to the pub garden, but on the whole, it remained peaceful, and with me seriously flagging, I needed morale boosting classics like this.


The bus didn't stop where I wanted it to, so I threw myself in front of it to ensure I got out of here.  One final pubby push, and if all went well, we could call the week a success!  But would it?  Find out in our final part 11 tomorrow.  Och!