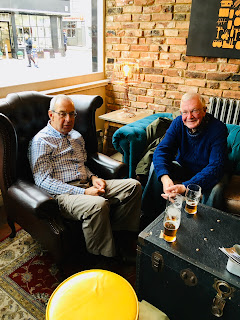 Halfway through our tour of South West/West London back on 2nd Nov and Dad's old (by which I mean 'young' of course) chum, Eddie, was ready to meet us for the final three pubs of the day.

I'd enjoyed Kingston so far, which was surprising to me, the 'Spoons was decent, Willoughby Arms great and the Albion had exceeded expectations.  It certainly hadn't been the rocky horror show I'd been expecting!

Could we make it four out of four in Kingston's oldest pub?


I can't say I was exactly captivated by Druid's Head, Kingston (1619 / 2836) despite the historic Grade II listed status, nice flooring and a few decent features as you walk the length of the bar towards gents and surprise garden.  The ale I wanted spluttered to an immediate halt so something with a pumpkin on it from Twickenham on was a hasty replacement, and a decent drop it was.  Eddie was laying on some low flung settees to the front left like the Queen of Sheba (the cat version), and it was like greeting an old friend even though I'd only met him once before, briefly, on a dark South Kensington night three years ago.  Yes, the pub was generally populated with well heeled dining types, and the scene felt typically West London.  It reminded me, a bit, of some of York's more historic outlets - I'm thinking the likes of Golden Fleece, Black Swan and Ye Olde Starre Inne.  It seems the more history and ghosts you have, the less effort is put into creating a good experience for the humble customer, which I guess are mostly tourists, so not quite so discerning as the 'pub ticker', who after all, is born with 18.33% more 'good' genes than the rest of the population.  And that is a BRAPA fact. 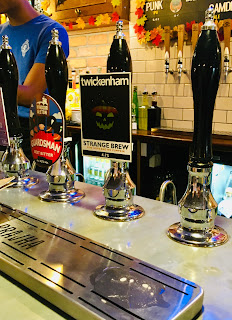 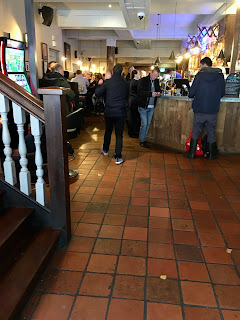 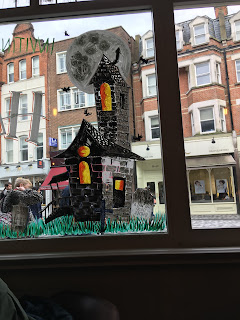 Eddie used his local knowledge to declare that it made much more sense to get a bus to Teddington than the train, and with Dad now the proud holder of a coffin dodgery free pass, no one was likely to complain .......

As regular readers will know, the fifth pub of the day is traditionally the one with most memory gaps, so on the rare occasions it is also the BEST pub of the day, it throws my brain in all sorts of turmoil!  And that was certainly true here at the joyous Masons Arms, Teddington (1620 / 2837), a low-key early contender for pub of the month.  A bustling atmosphere full of happy, jokey pub people, only the Willoughby so far had a hubbub approaching this.  A curtain made out of beer towels on the way to the gents, the Cresta polar bear, old skool beer trays, and a man prodding me to tell me he liked my jacket and was I a biker?  Shades of Isle of Man here, and you can't pay a much bigger pub compliment than that.  Drunk men sang 'Swing Low Sweet Chariot' like the World Cup Final had never actually happened, though I couldn't relax for long when well-meaning Eddie committed the ultimate BRAPA act of treachery by bringing a bag of peanuts to the table.  So I had to explain my allergy, and no double dipping with the Golden Wonder!  Dad reacted to this shock development by returning to the bar and buying three more bags of Golden Wonder.  If the nuts weren't gonna kill me, the salt content probably would.  No wonder (excuse the pun) that when the lovely Mrs Eddie arrived for a green highlighting cameo, she looked confused by the huge snack content on the table.  Here's a '5th pub of the day' which really sticks in the mind .... the mark of a true great. 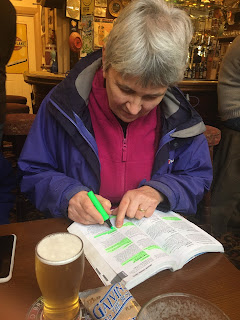 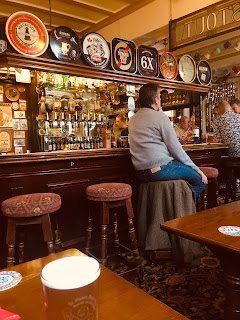 We then headed for the final pub of the day in the Strawberry Hill area of (T)Wickenham and I'll be blowed if I can remember whether we hopped aboard a bus or walked, though I suspect we did both!


Sussex Arms, Twickenham (1621 / 2838) was another strong pub on which to end on, lacked something of the olde worlde boozery charm of the Masons, but it still felt traditional and cosy with the fire roaring.  Mrs Eddie had departed, and with a taste for pub snacks after the peanuts fiasco, Eddie went upmarket with some Calamari, which he let me have some of.  It was the best BRAPA 6th pub of the day food nicking since a Mr & Mrs Taylor let me nick half their burgers in the then shady preemptive, now brilliantly relevant Alexandra in Cambridge.  I didn't even do a Twitter check-in here which suggests I'd lost all discipline by now, but my subconscious is telling me to tell you that you should pay a visit here if you haven't already.


So there we go, 'twas farewell to Eddie from us both at the end of a successful day, if you are South African or a lover of good new pubs in South West London.

Join me tomorrow night for a rare West Yorkshire quadruple.