I might have had my doubts going into February about my ability to reach the numbers I wanted, and to maintain my enthusiasm without the usual 'BRAPA Winter Holiday', but it has proved to be superb month from start to finish, 37 new Good Beer Guide pubs and 2 cheeky pre-emptives well beyond my level of expectations back on the 1st.

It all began by the fire in a surprisingly good Bridlington Wetherspoons, and it ended like this, posing with a bloke called Wig and lovely Mrs W at one of those rare spectacular micros, one of the hardest Tyne & Wear 'ticks' in High Spen. 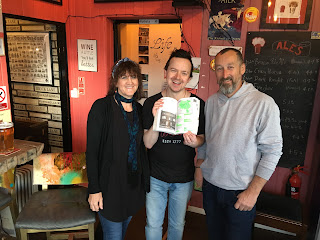 Of course, I need to blog about that and seven other pubs in the coming days, but for now I thought I'd break off and give you a flavour of things as they stand.

Here's a boring stat - 23 of the 37 pubs were all in the North East.  Okay, so various storms like Citra and Steffan Dennis have hit hard (as did my sickness and diarrhoea I don't like to talk about).  I've decided to give Cumbria a wide berth for now in case it is snowing and everything is cancelled, but Durham and Tyne of Wear are going great guns, and I'm even taking baby steps in Northumberland.  "Why eye ga ga goo" as the baby's no doubt say up there.

11 pubs left in Durham, 10 if I say 'well, I tried High Hesleden but they were on holiday so sod 'em' (which of course, I wouldn't do if I was in the 'completion' years of ticking, but as a first attempt at finishing County Durham, I have no qualms).  Edmundbyers gives me sleepless nights, Westgate is not much better but perhaps their opening hours on a Saturday aren't as bad as I thought.


You can mentally colour in High Spen and Swalwell in your minds, leaving just Ryhope.  This twins well with Durham ticks like Seaton and Seaham so am feeling pretty chill about FINALLY completing T & W sometime in March/April.


Plenty of work to do still in Cumbria, but weather permitting, I'll get back on it in March.  In a High Hesleden kinda way, the Gilrcrux Caravan Shack I'm going to ignore based on my failed January visit, Great Corby has technically been de-guided due to a change of ownership - this wouldn't necessarily stop me going but I'm not ruling out skipping it!  A trip to 'outer' Carlisle is needed, Appleby and Kirkoswald shouldn't be TOO bad, and a Ravenglass-Boot railway trip when the weather really improves is high on my agenda.  Aim is to have it done by end of August. 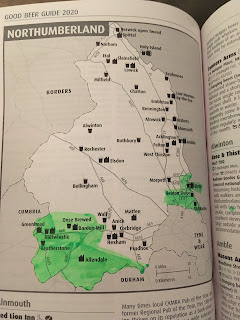 I've only really just started Northumberland but it isn't a county exactly chock-a-block with GBG pubs, so a couple of nice spring/summer weekends and who knows, could I get it finished before the 2021 GBG drops?  Problem is, ticks in the likes of Alwinton and Rochester give me a massive headache, public transport options seem zero, as do nearby taxi firms or even an average sized town with a transport service!  I need a friendly driver, or as a nice man from Swansea called Nigel suggested, get well in with Northumberland CAMRA and try and get on one of their minibus trips!  Not ruling it out.  I'll go in the boot, you won't even know I'm there.

I've been thinking about where to go for June's BRAPA Summer Holiday recently.  I'd changed my mind from Cornwall to Dorset, and then thought Mansfield as a base to do Notts!  Has anyone been on holiday to Mansfield before?  Comment below.  Is six days there too long?  If not, perhaps the Northumberland coast could be a wise move, keep this year's North Eastern theme going.

Some of the pubs this month have been simply stunning, so I'd like to nominate 3 to go into the hat for 'BRAPA Pub of the Year'.  These are, in no particular order:

Anything I wasn't so keen on?  Isn't there always?!  Moderation in Reading was utterly dreadful, Three Horseshoes in Running Waters tried but never convinced me it belonged in the GBG, Tap & Vent in Longridge was such a non event, and the Benjamin Fawcett 'Spoons in Driffield just wasn't very good.

It ain't gonna be easy.  Only 4 Saturday's in the month, and for one of them, I'll be in Lanzarote (NOT that I'm complaining too much about that, there'll probably be a micropub somewhere if I look closely enough, there always is).

That means I need to do something I was pretty tardy with in Feb, and get back on the South Yorks Thu/Fri evening trail to supplement by weekend trips.  I still have stuff to do in Hatfield, Mapplewell, North Anston, Thorpe Hesley and even bloody Sheffield itself!

As for the Saturday's, Lichfield gives us a rare break from the North East.   21st March I've got to decide whether to return to Cumbria or be a bit more reserved, weather dependent.  I've been told the pub in Westgate, Durham opens early on this day, so a good opportunity to get it done?  And on 28th, Dad and I are lining up a Durham day which should help me get somewhere near completion.

You might remember back in September I was told that I'd be losing my job at Yorkshire Bank where I've worked for over 18 years!  Well, we had a further announcement last week, and without saying anything definite, it sounds like they want us gone by 18th Dec this year!

So what does that mean for BRAPA?

Well, I feel like I'm at a bit of a crossroads in my life now.  40 years old, and I don't think I want another office job for 19 more years, I certainly don't REALLY want to work in a bank again!  Money depresses me, unless I own it.  Redeployment isn't really an option, and I want the redundancy payout anyway.

You know those smug buggers who say "I love my life because my job is what I love doing .... and I get paid for it hahhahahaha *throws back head theatrically*)  Well, wouldn't it be nice to make BRAPA work for me?  It might be impossible.  But as the world's first 'pub vlogger', being better at Social Media (I need to get my Instagram back up and running), online store selling BRAPA shirts with slogans like "Not all heroes wear capes ..... but they are called Martin".  I don't want it all to be words and half-baked ideas though, I need to take ACTION!

I'd kick myself for not giving it a go, but I just don't have the time when working full time, so a couple of months at the beginning of 2021 to take stock, still in York, CV all updated, careers advice sought, some part time work to keep me ticking over (don't wanna put all my eggs in one basket), well that's the plan in my mind at present.

But like I say, nothing set in stone, our next bank announcement end of April / beginning of May could change it all again!   BRAPA is my passion though (BRAPA tattoos on forearms day after I leave the bank?), and it isn't stopping any time soon ;)

Thanks for reading, give me a big thumbs up and click below to subscribe (see, practising already!)