Mark the date, Saturday 19th October 2019, for it will go down in history, the day I finally 'completed' Stockport and achieved a record breaking number of  #PubMen on a BRAPA outing.

Fitting really, for it was Stockport that first helped my blog get noticed back in 2015, when the Arden Arms refused to let us sit down for invisible diners ('get over it Si!'), but bravely told Dad he could sit on the stairs if he liked.  And then Boar's Head was brilliant.  I like to think I was the reason it then won the local pub of the year, but that might be a bit of a stretch.

Despite the Stockportian feel good factor pumping through my veins early on, THREE things went wrong before I even got to a pub.  Firstly, my train was delayed to the point of near cancellation, and it was a wonder I made it over t'hills for a reasonable hour.  Secondly, Pub Curmudgeon had phoned in sick with a stubborn chest infection and couldn't make it, laying prostrate on his deathbed with a kind cat kneading his back to release the phlegm (well, in my mind anyway).  But he MAY recover.  And thirdly and the key point in the here and now, our 11am opener (according to every media source going), the tricky 'outlier' Blossoms, wasn't open til 12 noon!  Nooooooooo! 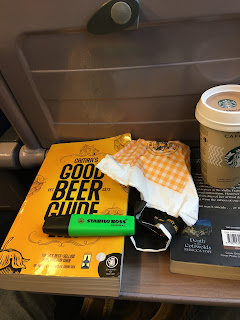 Such was my air of benevolence I feel when I breathed in that (almost) fresh Davenport air, I didn't even feel angry, instead wanting to put a consoling arm around Blossoms like an American uncle in a 90's sitcom and say "hey, don't stress it buddy, if you don't wanna open til noon, you don't have to .... but just give us a bit more warning next time eh Champ.  Now you go and shoot some b-ball".

So a good 20 minute trek into Stockport centre it was.  As you probably know, I have a great fear of shopping centres, and although I didn't end up 'indoors', I was still befuddled by it and its scouse name and had to pop into McDonalds for what we'll call 'the morning push'.

By 11:55am however, I was in prime position for our first pub, a 12 noon opener.  The shutters were still down, so I lurked around a corner not trying to look desperate.  I was still discovered by Twitter's Matthew Thompson, a kindly faced tall bloke who luckily looked like his avatar so I recognised him.

Never turn your back on a pub for when I did, 11:59am, a strange whirring sound started like a 70's spacecraft taking off, and I span around to see the shutters had come up.  Like a pair of twerps, me and Matthew T remained outside peering down the street at likely BRAPee's before I said 'what the bloody 'ell we waiting out here for, let's get a pint in lad?!' (though probably not a direct quote). 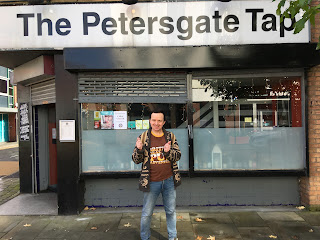 Petersgate Tap (1601 / 2818) had been on my radar for a while now, so like most of the pubs today, it felt like a more worthwhile tick than many of these 'debutantes' I'd done the previous day.  Although the red carpet was only figurative, and the main folk were away on some boozy jaunt in another city I can't remember, the staff looked at me with a friendly wariness and I tried to look demure & important, which obviously didn't work.  I ordered a cracking quality Hawkshead beer called Jester, and it wasn't long before legends (not to be confused with the Stalybridge vehicle)  had descended upon us.  Wow, quite overwhelming!  We had Greenfield's favourite son Quosh, he'd brought a lovely old Welsh dude along called Gwyn (though he looked more like a Glyn to me).   We had John Clarke, getting an ale-chaser in before he disappeared off to a lager festival, though he sadly told me my fave lager Tennents wouldn't be available.  He told me Newark was his home town #AwkwardButNotReally  A bubbly smiley chap Stuart Bedford was very interested in BRAPA and made me feel at home.  A lovely Scottish guy who sometimes comments on my blog, Scott Campbell, appeared, showing he was taking his role seriously, wearing a cosy CAMRA fleece with no TWAMRA air at all.  Behind him was another Stuart who I've no idea who he was, but his cameo was Hitchcockian in its splendour.  And if I put all these chaps in Antiques terms, we can't forget the Faberge Egg of the day, Cooking Lager, so excited to meet him and what a lovely chap, the sheepskin collar helped make him appear more fluffy.  And last but never least, BRAPA veteran Matthew Lawrenson, who in the early stages, took the BRAPAesque backseat role, observing all in an amused fashion.  A record number of people,   I'd never have dreamed of a scene like this back in April 2014 when I set out to the Albion in Ampthill for tick number one!  Petersgate Tap, obviously a more modern bar in Stockport real ale terms, had a warmth and effortless friendliness (which I think I'd have felt even if all these people hadn't been here!) that shone through, but when conversation turned to 'beer', I turn to Quosh and whisper "shit, I'm in an actual grown up beer conversation!" and wondered if he had Chris Dyson on speed dial to give me some intelligent buzz words like astringent.  Quosh says "are you like a swan, serene on the surface but frantically paddling underneath?".  It made sense at the time, and summed up a very high octane start to the day. 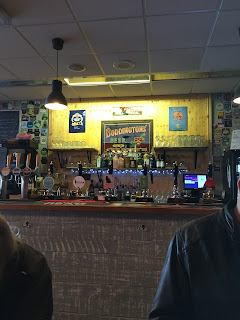 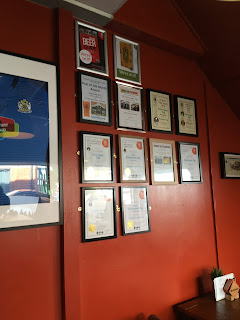 In all the mayhem, I'd nearly forgotten to take a couple of indoor shots which explain why they look a bit rushed!  With only five remaining GBG ticks, I'd asked Mudgie for a preemptive tick that might make a future edition, and the local knowledge of those around the table told me it made sense to do it next ........


The chosen pub Angel Inn, definitely has GBG potential, no doubt about it.  It was an old pub, if you see the font in the above photo, that's a throwback to its previous incarnation - it has been closed 69 years or something crazy, a bit like a micropub in Pocklington!  (that was Yorkshire pub humour, I don't expect you to get it).  The beer was cloudy, but it was supposed to be.  When she told me, I held it up to light, squinted and nodded.  It seemed the right thing to do  The staff were perhaps looking at us even more expectantly than in the last place, had they had a tip off about my visit?  Think I was getting paranoid, or perhaps big-headed!  Oh dear.  Well, we all stood around the main bar, like the kind of groups of men I detest when I'm on a BRAPA trip, admiring wood panelling and the decent mix of old and new, but when John asked me if I loved it, I told him "hmmm, can't help but feel something's missing!" so he shows me into this cosy back snug with bench seating, might've had a fire etc. and it wasn't even so he could murder me on the sly for recent pub crimes.  Why hadn't we come straight to this room?  Easily the best part, the beer tasted better in here too, get it in the GBG soon, and on the way out, the staff told us how much it'd mean to them to get in the next edition, which is always great to hear amongst the more common "oh, THAT book, we're in it are we? (yawn)".


We continued to walk away from town, into this mystical area called Portwood which you've probably never heard of (I hadn't) for pub number three ....... 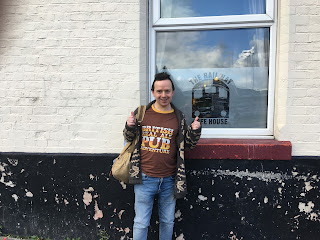 My favourite pub of the day, Railway (1602 / 2819) really hit the ground running from the moment I stepped inside with one of my fave beers, Oracle, and immediately a gnarly nosed old local turns to me, about an inch from my face, nose practically touching mine, and told me Salopian were a top brewery.  Almost romantic.  The pub had a wonderful old no-frills bric-a-braccy feel and those of the group who'd got here before me were all lounging around like they were on their 15th pint (thought what'd gone on in Stockport 'Spoons earlier, we can only imagine).  A bit like the Hollywood handshake on Bake-off, you know a good pub when the staff get to highlight the GBG this early on in proceedings, and Ebony highlighted with panache, leaving me to wonder why it had all gone so wrong for me in Sidcup!  A couple of us looked with suspicion at a worn bar billiards table, and then a friendly Viking came over to tell me about his ale bar, Vinabod (or 'Number 31', for those of you have memorised the Stockport Beer Town leaflet, like me, maybe).  Almost a wrench to leave, though those who stayed told me there was further drama involving another crazy guy, though I can't remember the details so please comment below!


So, halfway through the day.  Longest walk coming up.  Some said farewell to us here like John (lager festival) and Scott C, some went to Greggs, but me and Matthew T strode outwards towards this brave new land called Heaton Norris.

More on that in part two on Wednesday night.  Hope you enjoyed it, sorry if I forgot loads of details!