BRAPA and ..... The Green Devil Makes Work for Idle Tickers

BRAPA was a mere baby Brapling when I was last in Greengates, on a hot summer's May afternoon in 2014 surrounded by scary old blokes drinking Tetley's, crossing my legs in case I walked the wrong way to the Gents.  The pub was called the Albion (all Albion pubs are scary), though the pub-weary modern day BRAPA would be less intimidated.

I walked past the back of it tonight in fact, and in the cold November night, it looked more foreboding than ever.  Weird place is Greengates, mention it even in West Yorkshire circles and people squint at you like they are trying to visualise a luminous whippet, best thing to do is add " .... it is somewhere near Idle!" and scurry off before they ask a follow up question.

Tonight, I was micropub bound, for the first of four debutants I'd be visiting ....... 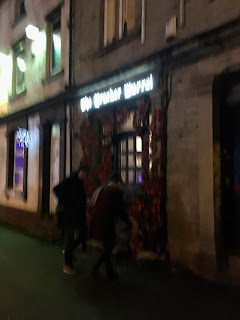 I tried to retake the blurred monstrosity you see above, but there was always an elf-like middle aged woman squatting on her haunches, smoking, smiling up peculiarly at me, so I gave up!  Abysmal photography (even compared to normal) would be a theme of this weekend.  Cracker Barrel, Greengates (1622 / 2839) , in my mind, had to have the prerequisite of complimentary cheese and biscuits on the bar or it was doomed to failure.  It didn't.  But Cracker Barrel cheddar was never good, was it?   Furthermore, everyone was smiling at me, and the lovely gaffer was positively beaming when I chose £2.50 Tetley's Cask ahead of unusual more expensive guests.  Have I ever sampled a better Tetley's?  Probably not, simply beautiful.  On a more sour note, two bar blockers were ignorant chumps but the third man described as 'our pub mascot' by the gaffer who had to push him out of the way to bring the beer to my hand, did a little dance.  He wore a 'Walking Dead' tee shirt and if he was a zombie, he was a very human one.   To remind us it was close to Remembrance Sunday, one old guy wore all his war medals and a suit - I love that generation of old northern #PubMen who get dressed up to come to the pub.  Less pleasing was the 'fake stone wall' wallpaper, perhaps even less appealing than the fake bookcase wallpaper I so despise.   But with a warm, jovial hubbub, smiling faces and great ale, I'd have to say the Cracker Barrel was a cracker - cheese n biscuits or not! 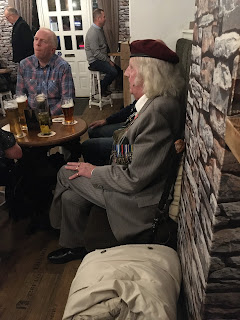 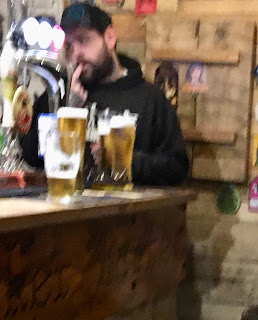 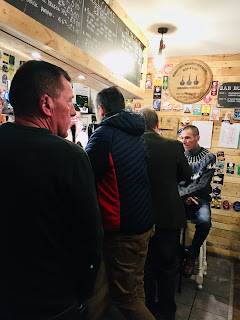 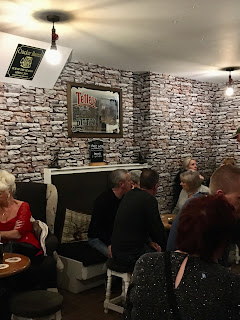 As I remembered from that day back in May '14, it isn't a long walk to Idle, which is good, because I had a debutant micro there as well.

My phone fell asleep for no reason, so I had to hover outside the pub whilst it 'woke up' again.  In the intervening couple of minutes, a group of three lades walked into the pub just ahead of me, which would prove vaguely significant ........

You don't need to tell me about pub etiquette and how to conduct myself, I know the drill.  So as the three men pondered over their choice, I stood in the background waiting patiently.  The mistake I made, having made eye contact, was smiling at the barmaid.  "OKAY, I'LL BE WITH YOU IN A MINUTE!" she bellows over the loud music, and the three blokes, another group, the rest of the staff and an upright Myra Hindley type all turn to glare at this impatient interloper, who as far as they were concerned, was trying to 'push in'.  And that lit the blue touch paper for an unlucky time here at the Idle Draper (1623 / 2840)  Annoyed that I was now public enemy number one, I remembered how Saltaire's rebranding of Triple Chocaholic as 'Triple Choc' annoys me in a Mac 'n Cheese kinda way, so I made sure I enunciated 'A-HOLIC'.  It made me sound weird!  And with a darker, louder, chillier, more soulless atmosphere than in the Cracker Barrel, this really wasn't proving a pleasant time.  A new group of lairy gobshites ("is 'Ey Up' a Yorkshire phrase?" asked one), blocked the way to the loo.  When I did finally decide to go, one of their ranks was just returning. "Give it 5 minutes!" he shouts, but too late, I was in the pub's only loo and he'd managed to make it smell like Boothferry Park under the West Stand in 1995 which was quite an achievement.      I've not even mentioned the barmaid who squealed like a pig because one of the three blokes at the beginning was a long lost friend.  Solace came from an unlike source, as a drunk man staggers over and asks to shake me hand.  "Uh oh, here we go" I'm thinking, but 'Paul' (as we'll call him to protect his identity, even though it was his name)  was a really nice chap with plenty of local pub knowledge, and there was this unsaid 'Cracker Barrel is better than here but we'd better not say it out loud' understanding between us.  He won't remember talking to me, but he said if he sees someone new in a pub sat alone, he always makes the effort to introduce himself.  So thanks Paul for adding some late joy to a tough pub experience! 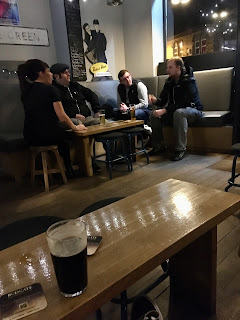 I tracked down a bus stop, though I think I'd wandered into a place called Apperley Bridge now, and after wisely deciding against a wee in a graveyard, I took a bus for 10 minutes for Shipley, hopping off in the right place more through luck than judgement.

Shipley for me, is a much ticked place, and I think busy roads with no pedestrian lights and a dodgy Wetherspoons which didn't even offer me a glass for my drink.  The boozers are less twee than in neighbouring Saltaire, but that is not to say I exactly had high hopes for this next one ...... 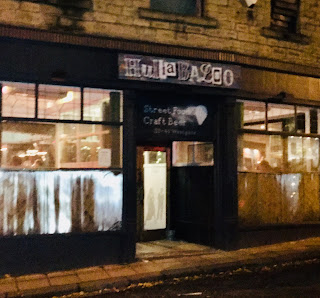 Hullabaloo (1624 / 2841) did impress me quite a lot though, and I guess anything that has 'Hull' in the name has to be good, right?  Though I was a bit disappointed by the lack of life size cardboard cut out Grant McCann downing a pint of Guinness.  It was quirky though, we were well gone Hallowe'en but strange skeleton decor interspersed with leafy patterns and Crystal Maze final round vibe made a trip to the upstairs loos a strangely trippy experience.  If was to rate my own BRAPA efforts in 2019, my attempts at 'bar banter' will have to go down as a woeful 1/10 with the '1' for effort.  So I was glad to get it right here, when I saw an ale called 'Don't Mess With Yorkshire Ale' and declared 'you can't NOT have a beer with a name as good as that!'  (It wouldn't have worked in Lancashire, I admit).  Well, the silver haired old gent to my left (kind of the Eddie of Shipley) and the young guy to my right (a sort of former Emmerdale type fallen on hard times) both laughed.  Then the vivacious sparky barmaid with a new shorter haircut (according to one gossipy lady later on)  asked if I'd tried Northern Monk's Rhubarb and Custard beer and before I knew it, she was telling me that as good as BRAPA is, her guide to the areas 20 shittest pubs was better.  She's probably right.  She told one horror story about getting a glass of wine in a dirty pint glass or something, but wouldn't tell anyone the pub in question despite the local's thumbscrew efforts.  It unravelled a bit when Shipley Eddie said his wife had his tea on the table, and he left, he seemed to take the atmosphere of goodwill with him!  But it was great while it lasted. 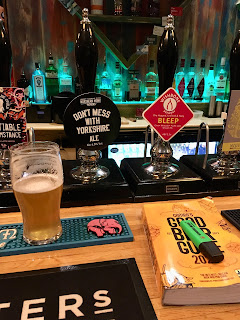 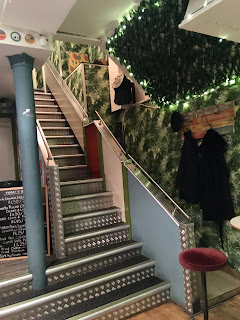 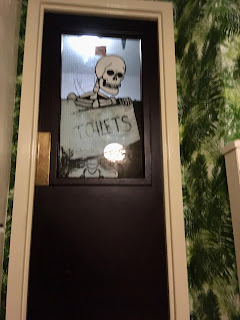 Like Greengates to Idle, Shipley to Saltaire is nothing of a walk and although the clock was ticking on well into the night, it'd be wrong not to do a close-to-record-breaking 4th Friday night tick.  But hang about, what was all this? 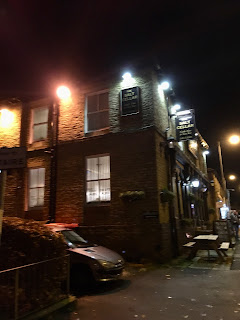 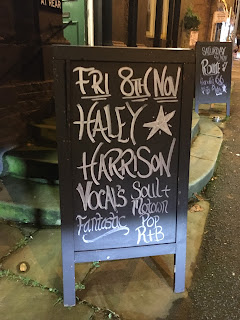 I think was the 'surprise factor' that most endeared me to Salt Cellar, Saltaire (1625 / 2842) for as I mentioned earlier, recent Saltaire new entries have all been 'of a type' and not particularly a type I like, so to be confronted with a no-frills balls-to-the-wall boozer like this was quite unexpected.  Dangerous looking men with shaved eyebrows served me from a vast range of beers (the quality was decent, but not as good as some tonight) and ladies with foundation and day-glo lipgloss pouted into drip trays and flickered fake eyelashes so long, they nearly acted as venus fly traps for barflies.  The pub was busy, but always half empty, as most were chain smokers so spent half their time outside.  And that is where Haley Harrison comes in.  All the best headline acts keep us waiting endlessly before the set begins,  Metallica at Download, Greenday at Donnington, Ivor Biggun at Maidenhead Powerdrome, and now, Haley Harrison, with her soul, motown, pop, r&b, and fantastic vocals.  She fiddled the odd mic stand, swigged the odd drink, but was I going to witness any of this before I finished my pint?  I could only admire the stained glass uppers for so long, and I had a train to catch.  A middle aged couple shuffled into view, looking as anxious as anyone could, I tried to give them a reassuring smile, and they sat down a bit too close to me.  But it was no good, I had to run for the train, via the loo.  I was just washing my hands when I finally heard Haley start.  'Dreams' by Gabrielle, of course.  I stayed til the end of the song, behind a pillar.  "I'm here all night!"  she announces.  But sadly, I wasn't. 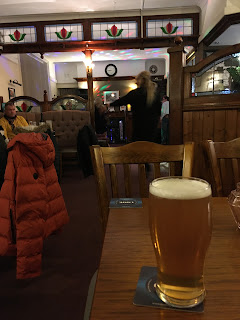 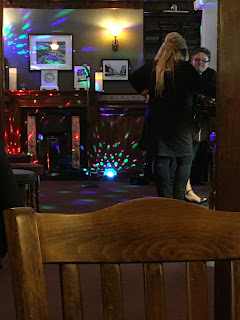 So, a highly successful ticking night.  Only one more West Yorkshire pub to do in the first half of the alphabet, that'll be a week on Friday and features not one, but two #pubman legendz.

Oh, and if you were wondering where the Green Devil came into it, this was a term for my green highlighter, not the Oakham beer!