Blissfully unaware that I was approaching the summit of summat called 'The Slope' (very much the Kilimanjaro of Stockport), I arrived first at today's fourth pub along with Matthew T and Matthew L.

A few had stopped at Gregg's, and had it been the more BRAPA friendly Pound Bakery, I might have joined them, but for now, the never ending morning sausage roll I'd had on the train was just about keeping me sustained ..... as long as I didn't do anything silly, like you know, Old Tom, or something like that.  Imagine(!) 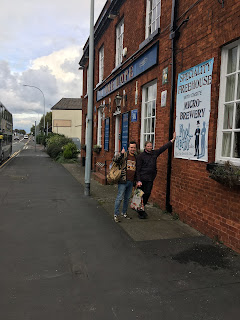 No, despite the slight altitude sickness, I managed to crawl to the bar at Hope Inn (1603 / 2820) and croak that I wanted a pint of the Orkney something, for we'd been discussing Orkney on the way up so it seemed fitting to see one.  However, as the focus returned to my eyes, I realised I may have made a mistake.  "Oh gosh, was I supposed to go for a Fool Hardy ale?" I squeaked, noticing the pub was home to their beers.  The barmaid gave me a flash of her pearly whites, as if to say "you'll know for next time chum".  Little did she know, there'll never be a next time! (besides, I'd had their ales in Marple Bridge and can't remember them!)  The Gregg's Gang had done remarkably well to catch us up, but even more notably, a hushed reverence fell across the premises as Peter AKA Pub Curmudgeon had risen from his deathbed to join us at one of his locals.  The Hope Inn had a 'pubbier' feel than I'd been expecting though the layout felt a little overly 'busy', but we sat in a group like the #PubMen we were.  Now you'd think with the introduction of Mudgie, conversation may turn more highbrow, and you might be correct.  The main topic of conversation in here was the reintroduction of beavers to the UK, and not just any beaver, but chav beavers.  Don't ask, I have no idea!  A couple of important points of order followed, as Cooking Lager got to highlight the BRAPA GBG - a moment he'd correctly identify as 'one of his proudest' before I followed suit and asked Mudgie to highlight the September/October issue of 'Opening Times' underneath two of his new 'hits' 'The Beer That Dare Not Speak Its Name' b/w 'Sheep in Wolf's Clothing'.  Rock n roll, good place, onto pub five!


A short walk down the road, the weather now turned a bit grey and blustery for the first time as our group strode purposefully back down t'Slope towards the other Heaton Norris GBG entry, Magnet (1604 / 2821), a determined silence in the air punctuated only by the occasional Mudgie chesty cough.  It was hard not to draw comparisons to Edward the Confessor and the storms of the winter 1065/66 season.  'What on earth is he talking about?' I hear you ask.  Let's get inside the pub. 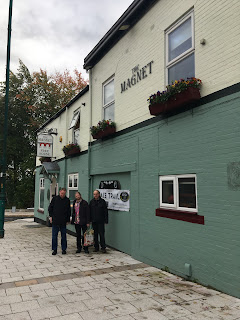 I wasn't prepared for how busy it was in the Magnet, which had a fantastic bustling community feel as I squeezed in between a few bar blockers to realise John Smith's Magnet was about the only ale not available, so I went for a 5% porter figuring I'd done quite well to limit myself to ales around the 4% mark without going rogue on a barley wine or anything!  A semi-heated outdoor area was where some of us headed, fighting our way through the crowds, but drama followed as Mudgie wasn't enjoying his ale!  A few of us tried it, and it wasn't 'off' in the traditional vinegar sense, just had a weird sweetness.  Someone retrospectively described the term for this beer type (something like pterodactyl!)  but in the moment, all we could do was ask the question any sane #PubMan could ask, 'What Would Martin Taylor Do?' so Mudgie poured it into a plant pot.  Top effort, the plant didn't immediately wilt, which was kind of sad, and I took a video which, when my WiFi stops being slow, I'll link to my YouTube 'BRAPA Outtakes Video' YouTube channel which I'm trying to get up and running but isn't quite there yet!  Before I could process the brilliance I'd just witnessed, Quosh calls me indoors to chat to this nice couple he's befriended, Alison & Anthony.  She won't know it but Alison made BRAPA history by becoming the last person to highlight the 'fake replacement GBG' before I got my original back from Denby Dale.  Strong pub this, though I still preferred the Railway on balance. 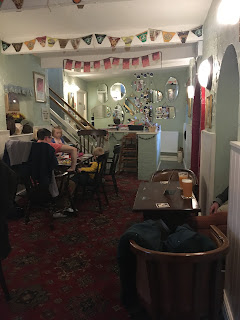 With the weather getting worse and a long walk to Blossoms quite unappealing, it was not only superb when Mudgie suggested a taxi, but he must have summoned one psychically or something, as it was parked out the front of Magnet before I could blink!

I said farewell to Quosh & Gwyn, Matthew T too, for we were now down to the final four - myself, Matthew L, Mudgie and Cooking Lager.

The fact that I tried to give Mudgie £4 for the taxi (as if it was £16 from Magnet to Blossoms!) perhaps showed my mental powers were deteriorating a touch .... and this was pre Old Tom.  Oh dear.

But Blossoms (1605 / 2802) was worth the wait, and easy to forgive for the earlier opening time mishap.  It felt about as 'Stockport' as any pub could, with serving area, old carpets, and peaceful rooms in every direction being just the ticket at this stage of the day.  Lovely pub.  A cute little toy tiger grasped the Unicorn pump clip and I decided that was an omen that if I drank a pint of it, Hull City wouldn't have any problems winning .... which didn't really turn out like I'd hoped.  We sat in a quiet backroom and the atmosphere (not my drunkenness, honest) took over, and I could feel the day's 'moment of contentment' drifting over me in waves.  Now exactly who's bright idea it was to get a nice half of Old Tom to finish on is unclear, but I will say I refuse to talk responsibility for my own actions at this stage!   Next thing I know, one of those weird time gaps happened and I'm walking around Manchester Piccadilly station wondering where Platform 1 is.  Ooops.  I remember 'coming to' in time to realise its actually pretty obvious, but next thing I know, I've woken up with a jump and told the bloke next to me I think I need to get off the train if we are in York.  "Haha, only Manchester Victoria mate!" he says.  I explain it has been a long day.  I fall back asleep, waking properly somewhere between Huddersfield and L**ds.  I find 1/8 of an Upper Crust baguette in my pocket.  I hope I enjoyed it!  Easy to forget what good stuff that Old Tom is........

Had been a cracker though, huge thanks to everyone who came along and all six pubs, for making me feel really part of the Stockport beer scene!  Definitely a day I'll remember, and once there are six new Stockport GBG pubs, I'll be back (and of course, I have bits n pieces like Romiley, Gorton and Whalley Range to do).