Hull City were at Fulham, but Father BRAPA and I had no intention of attending.  After all, I didn't want to end my lucky unbeaten run this season, and it wasn't like we'd go to Fulham and stuff 'em, was it?

Instead, it was a chance to get a full SIX pub Saturday in the name of BRAPA, and meet Dad's friend Eddie, who lives 'twixt Strawberry Hill and Teddington.  He's featured once before in BRAPA history, at the Anglesea Arms in South Kensington, which was quite a great pub.  Could he match this form today?

Because I'm a useless South London pub ticker, options were endless and I noted that Kingston had FOUR entries and was handy for both Teddington and Strawbz Hill.   The BRAPA experience of SW pubs so far, I have to admit, is 'expect them to be poncy dining rubbish but end up being generally positive experiences'.

But it was typical dumb BRAPA luck that we were almost Twickenham bound early on the morning of the Rugby Union World Cup Final between England and South Africa.  This COULD make things interesting.  Or very very bad.  In our best interests to pray for an S.A. win?  Dad thought so!   Not only is this game played by southern poshos and Geordies gone wrong, but the ball is an awful shape and I have terrible memories of Mr Lunn's P.E. lessons at school.  Gimme 'League' any day, or better still, gimme football, football, football, grrrraaah, grraaaah, grraaahhh!

After some smooth trains of minimal fuss resmebling a colonic irrigation (where IS the Northern Powerhouse?), we started as all good London pub days start in Wetherspoons:


The first BRAPA tick of November then was the King's Tun, Kingston (1616 / 2833) but we got off to a spluttering start as our hardworking young hostess had to really go some to try and eek out two pints of award winning Surrey Hills, £1.89 a pint, can't go wrong.  Our almost round of applause and words of praise possibly sounded patronising but hey ho. 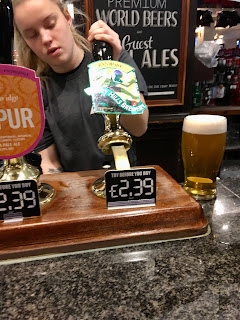 With a group of largely muted gammon faced blokes watching the 'rugger' to the left, it was evident things weren't going England's way.  How sad. We sat by a table and what a shame the fire wasn't in, but then again, have you ever seen a (deliberately lit, yet contained) fire in a 'Spoons house?  No, it just came across like a random pile of logs not doing anything. 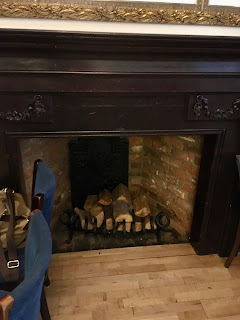 A quick glance around the room showed some typical 'Spoons Saturday morning activity.  The shopmobility scooter had been driven off with the help of a 7 foot tall Boris Becker in leather, another man put some milk and eggs on the carpet for a rest, and a mystery rotund ginger bearded chap posing as a window cleaner in a hoodie scared us briefly.


A man confirmed to his wife from behind an ineffective whispered hand that England were indeed losing, a fact I could verify on the way back from the loo where I'd discovered the mains which control every Wetherspoons in the country .....

In fact, I forgot to look at the rugby, too busy admiring the lovely carpet, in what I'm sure Dad would agree was one of the more slightly above average London' Spoons we've done in BRAPA history ..... 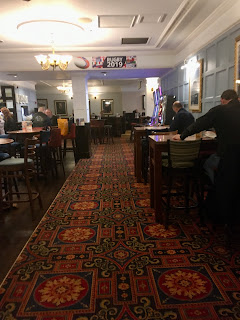 Made sense to get the 'furthest Kingston outlier' done next, though a big part of the reason was the 10:30am opening time meaning we really could get off to a great start.   Hallowe'en was over, and the pumpkins were looking somewhat hungover ......


More drama before we reached the pub as Dad nearly stepped on a dog so small, he declared it was "a bit of Kleenex on four legs".  I hope the owner heard, for Dad was correct.  Boutique twogs.  UGH!

The pub was finally upon us, you should really reap what you sow in this BRAPA game so perhaps no surprise that in my humble opinion, Willoughby Arms (1617 / 2834) was the best of a surprisingly decent Kingston quartet. 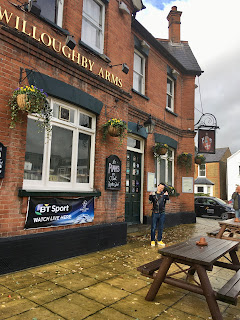 A delicious back street local, full of atmosphere at the bar and in the side room (there was also a games room by the bogs dividing it into three).  And we encountered the best of both worlds, England had just lost so the atmosphere was gallows humour / sombre / fake apathy (a winning combo!) and free bar snacks laid on remained uneaten (possibly cos everyone had lost their appetite) so I quickly snaffled us the last few.  Scanning the ales, served by another barmaid of distinction, the bar blockers 'helpfully' told us they had a beer festival on and with a vague wave of the hand over to the right "plenty more ales to choose from in there!"

But I told them there were three handpumps on, which was more than enough choice for us.  Like they couldn't compute my words, they tried again, and again, I told them thanks but we are fine with the choice on the bar.  They raised eyebrows like I was mad.  Painful.  What is people's obsession with having 50 beers to choose from?

We sat in the side room, all gorgeous decor and TV postmortems as England saffer (geddit?) and the folk around us can't decide whether to crawl back to bed or power on through with an all day drinking session.  Most departed, though at least one farted.  The loos, I think, had mini-plasmas to watch the sport on. 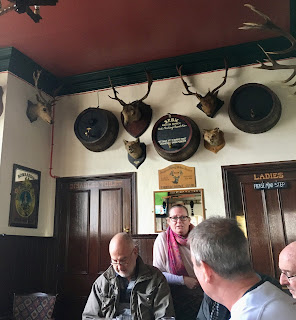 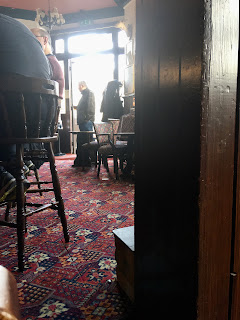 But we knew Eddie, currently doing important things men do in South West London when they aren't in pubs or watching rugby, could ring us at any moment to say he was ready to meet so it was vital we got back to the more central Kingston establishments.

The barmaid who'd served us finished her shift as we left so we accidentally had to follow her down the road back to the centre!   We saw a school of significance ....... 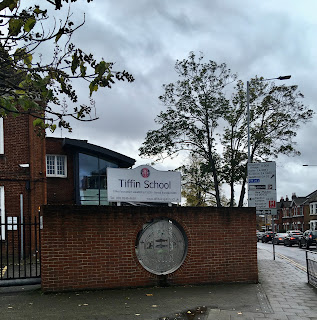 Dad is always saying "I've brought a bit of Tiffin" when he brings a snack to football / pub trip and I say "no, Tiffin is a choc bar" but in his old worlde mind, Tiffin is slang for any snack!

Well, that was interesting!  Next pub was made to sound a bit of a lame duck from the Google descriptions and when faced with the exterior, I wasn't holding up much hope, but it is nice to be wrong sometimes ....... 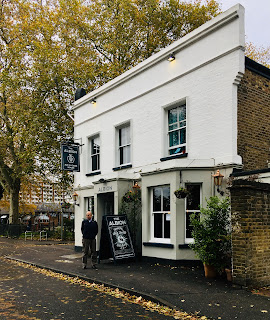 IT just screamed 'LONDON PUB' at the Albion, Kingston (1618 / 2835) with its bare boards, board games, twee ginny menus, local ales, twilds and twogs on leads and smart young staff.  A group of England fans were literally clinging to the bar with a real sense of 'we can't accept it's all over and time to go home' desperation on their doubting faces.  You've lost lads, admit it!  One man even had a Japanese head band on and he looked saddest of all. 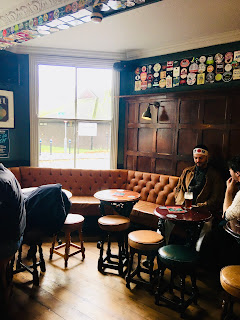 And it probably took us about ten minutes, but sat away from the bar area, helped immensely by quality pint of the day 'Big Smoke Solaris', really good staff (southern stuff?), and a warm quiet hubbub, we turned to each other and said "this is actually a really good pub innit?"


The peace was eventually shattered as Dad's mobile (turned up to full ringtone, full vibrate) on account of deafness paranoia, or just actual deafness, suddenly leapt across the room, glowing a weird red colour.  Yes, Eddie was ready to meet us.   I waited for Dad to say "Ooooh, I could bring yer mother 'ere for Christmas" but it never quite happened ...... 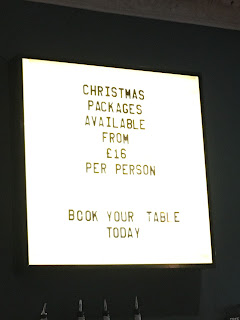 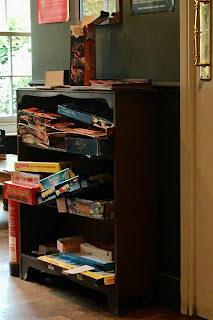 Time for our fourth and final pub.  For tales of that, and two more, join me in part two on Sunday if I have the energy.