I'd left the aptly named village of Broom on my Three Witches inspired Hallowe'en pub trip, and was now Alcester bound.  I'd rushed to make the 247 bus from a stop simply called 'Turn'.  Of course it was late to arrive, of course it was raining again.  At least there was a shelter this time.

I held my arm out well in advance (I even threw my left leg onto the road), aware visibility was poor and the road was a fast one.  He still saw me far too late and screeched to a stop a few yards further on, leaving me to gallop along the grass verge to reach him.

"Sorry mate, I only stop there about once every six months, so I wasn't expecting ya!"  he explained.

Talking of 'not expecting things', I wasn't expecting the bus to fail to turn into Alcester, but instead career north through the town.  I was wedged between a lame looking pub called the Roebuck, and the village of King's Coughton before I realised!

So after a brisk 15 minute walk back, I was finally in the town.  Why is BRAPA always so complicated, as Avril Lavigne once observed.

The two GBG pubs were on the same road, I went to the one without the 'award winning' symbol first, thinking I'll save the best til last.   But turns out this one was the real classic ....... 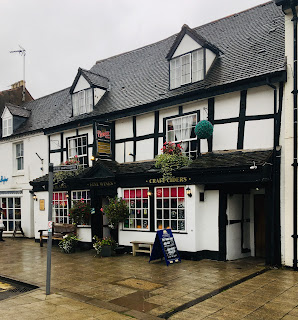 The clues were there from the word go in Three Tuns, Alcester (1613 / 2830), ales like Hobsons and Bathams being sold by staff who seemed to actually enjoy being here, stone flagged floors, boisterous old men on one side, nervous students on the other, and warped beams in what was actually a smaller one roomer than I'd first realised.   I sat at the one spare table in the pub and looked for the loo - of course they were outside, just to emphasise that classic pub feel.  Outdoor loos and great pubs seem to go hand in hand with unerring regularity on my pub trips.  I returned from my wee to the surprise sight of an old bloke sat opposite me on my spare table.  He did what he could to avoid eye contact for a good ten minutes, but I wasn't letting him get away with it that easily, and using BRAPA black magic (no i didn't bribe him with chocolates), I discover he's called Jim and I compliment him on the silver pewter he's drinking out of.  He's not the best socially, but indicates the blokes to my right by the window.  These are the 'Old Gits' group, he tells me, bemoaning the fact he has thrice tried to join the group but has been rejected, hence why he is sitting with me!  Now it becomes clear, some of the Old Gits are more talkative and are soon quizzing me on BRAPA, particularly the most superbly dressed one with a weird lid on his tankard - they all have interesting drinking vessels!  Perfect time to ask if they remember the Three Witches pub.  "It was never much loved ..... not many tears shed when it closed and got knocked down!" I'm told, thus ending my romantic mystery beermat story once and for all.  After a bit of BRAPA chat (I didn't trust any of them to do the highlighting), I soon shook a few hands and said farewell.  Pub of the day, and by quite a margin! 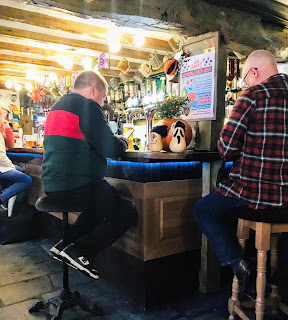 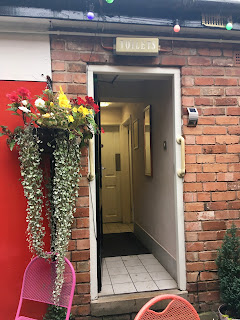 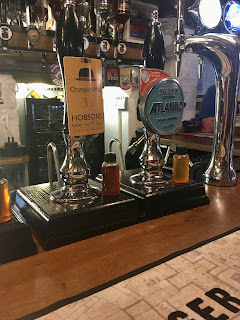 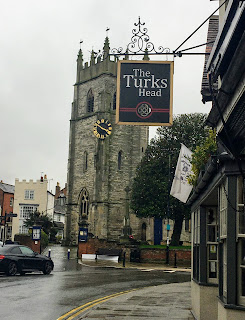 Turk's Head, Alcester (1614 / 2831) was a good pub and make no mistake, historic atmosphere, my main problem with it was it felt a little bit like a manicured wannabee Three Tuns, bit more of an upper class Prosecco foodie pub, but still good enough to be my second favourite pub of the day making Alcester a pretty good town to come for a pint or seven.   Being fifth pub of the day, I had the usual memory blanks, which meant I had to concentrate hard on the quirky chatter of the group in the window.  I perhaps overdid it as they noticed me chuckling along and noting down their words as they waxed lyrical on the Tiny Rebel blackboard next to me.  Why you might ask?  Well, they were Welsh daytrippers from Newport and what a fun bunch of folk, and to think the younger lad's jacket made him look like a very smart Nazi guard!  His blonde partner, once a successful magician I'm sure she said, moulded on Ali Bongo, known as Sally Pongo I think she said.  Part of me thinks my memory is playing tricks, but then again, Alcester was proving to be BRAPA gold.  I ended up going over as the pub acoustics weren't great with Welsh accents, and the older dude was a record appearance holder for Newport - can't remember whether it was football, rugby or pub visits.  A bit bewildered and unsure what was reality (did they really tell me Alcester had more pubs on the High Street than York did in total?), I decided a bus back to Stratford was the only way forward!

Back in Stratford, it was still raining of course but spirits were briefly lifted as the fair was in town, following me around from Shirland in Derbyshire.  This one had even fewer customers ...... 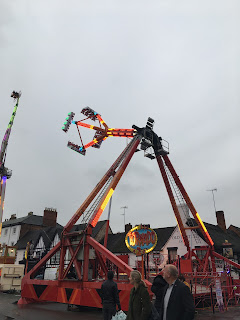 Even better news followed as I realised the sole Stratford GBG entry was only about 5 mins walk from the station, meaning I never stepped foot into the town 'proper' all day.  Will would've been ashamed of me, if he wasn't dead.   Oh well, last pub of the day, best get it knocked off in 27 minutes .....

'Twas veritably wall-to-wall with micropubbers at Stratford Alehouse (1615 / 2832) (AKA people between the ages of 30-55 lacking enough facial muscles to smile at strangers but enough to make their thoughts on a third of the new 9% DIPA clear).  I fought my way through the steamy throng, where mine host, wearing the same grey fleece that my taxi driver had earlier, served me a day-glo pint of something New Zealish, offering a few words of encouragement to allow me to ask one of the days burning questions "How come Stratford only has one GBG entry when it is a decent sized famous town?"  He blamed Greene King for everything, as you do.  Then he saw a man he knew and it was obvious he'd rather chat to him, but I wanted to be the centre of attention by now, so I sat by the bloke on a piles-inducing bench supported by barrels and tried to make him understand the importance of BRAPA.  It didn't really work, but he did tell me plenty of things, all of which I've forgotten but he seemed a decent chap.


So there we go, I journeyed back via Birmingham, can't remember a second of it, but that was probably good news.  Now we could finally sat farewell to October and get our November pub-ticking game on.